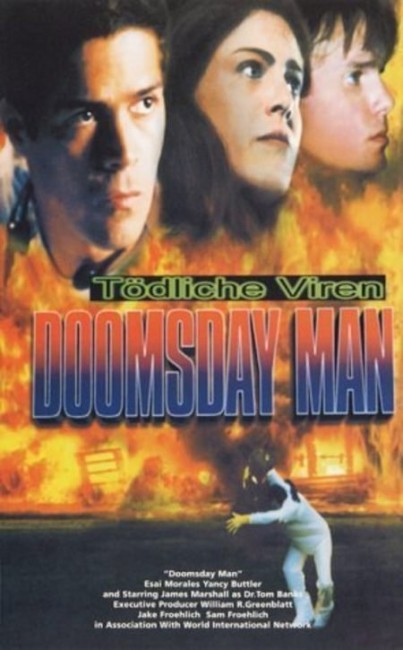 Epidemiologist Mike Lugo is forcibly called back from retirement to his former job with the US Army’s Bacteriological Weapons Research Department. He is informed that his half-brother Tom Banks, a fellow researcher, has gone rogue and stolen several vials of the deadly bacteriological agent Keller. Mike now joins in the hunt as the army try to find Tom as he heads across North Carolina.

Doomsday Man is a thriller that was clearly intended to exploit the public fascination with the Ebola virus that was prompted by the success of the non-fiction book Crisis in the Hot Zone (1995) and films like Outbreak (1995).

The film starts out well, appearing to offer a complex non-linear plot, an unfolding mystery and a much greater emphasis on character-driven drama, which is unusual for a plague/biowarfare outbreak thriller like this. Alas, such appearances are deceiving and, after a good opening momentum, the film breaks down into a ho-hum thriller that fails to wind its tension up.

There are one or two individual scenes with James Marshall taking people hostage and particularly the scenes with the military surrounding the farmhouse that seem to hold potential for suspense but are ultimately scenes that fail to involve one. Moreover, as the film goes on, it readily becomes apparent that it is a made on a low budget. Crucially, for a film that purports to be a cross-country thriller, most of it gives the appearance of being shot along the same stretch of placid, rural backwater highway.

The film is also miscast. James Marshall was briefly touted as the newest young star for all of about five minutes in the early 1990s but completely failed to do anything that rocked anybody’s socks. As an actor, he has quasi-Neanderthal looks and perpetually seems slightly slow on the uptake. Cast as a supposedly brilliant genius scientist, he simply is wrong for the part. He is far too young for one – this is a role for someone in their mid-thirties. Esai Morales is okay in the lead but it is also a part where he seems far too good-looking and too unobtrusive to carry the part. There is never a point in the film where Morales seems intensely wound up by the situation.

The sad truth is that had Doomsday Man been given a decent budget and a studio polish, the same script might have actually made for a strong and involving thriller but made on the low-budget it is, all its potential slips it by.