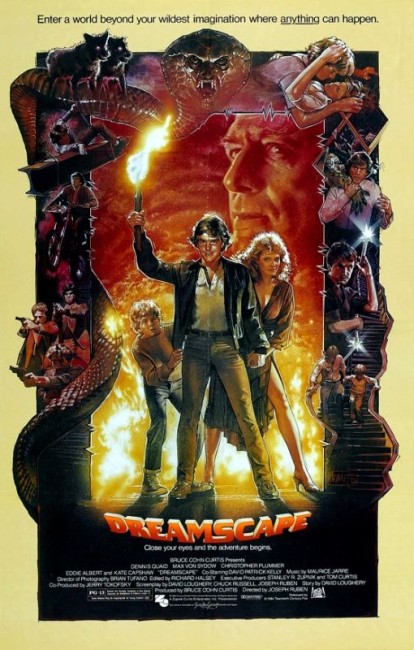 Alex Gardner is a psychic and makes a living by predicting bets at the racetrack. He is forcibly recruited by a dream research institute headed by Dr Paul Novotny. Novotny has perfected an amplifier that is able to project psychics into other people’s dreams. The device is to be used for psychoanalytical purposes. However, as Alex begins to experiment with the possibilities, he learns that the sinister government agency that backs the program is training the psychotic Tommy Ray Glatman to kill people in their dreams, the shock of which will kill them in real-life. Alex then discovers that Tommy Ray is about to be sent into the dreams of The President to kill him in order to stop him signing a nuclear disarmament pact.

There is an interesting idea at the heart of Dreamscape – that of psychic psychotherapy wherein the therapist literally enters the dreams of patients. The idea was first conducted by Roger Zelazny in his novel The Dream Master (1966), although the first glimmerings of such can be found earlier than that on film in The Electronic Monster/Escapement (1960). Much better treatments of the idea of people psychically entering dream terrain came in the years after in the likes of The Cell (2000), Nightmare Detective (2006), the anime Paprika (2006), Inception (2010), Vanishing Waves (2012), Mindscape (2013), Real (2013), Incarnate (2016) and Lucid Dream (2017).

Alas, in Dreamscape such an interesting premise comes out as depressingly predictable fare. Some imagination has gone into some of the dream episodes – like the paranoid nightmare of a sexually inadequate husband, or the little boy’s nightmare filled with distorted sets modelled on The Cabinet of Dr Caligari (1919), and the images of a nuked Washington in the President’s dream. (The film was made during Ronald Reagan’s massive nuclear rearmament of the 1980s and there is clearly a degree of wish fulfilment on the part of the filmmakers to the idea of having a President who is haunted in his dreams by the spectre of nuclear holocaust). Despite occasional touches, none of these sequences seem like dreams – what they crucially lack is the bizarre symbolism or surrealistic cause-and-effect of dreams, they are too pedestrian in nature.

A Nightmare on Elm Street (1984) came out three months later the same year with an uncannily similar plot but took a horror rather than science-fiction angle on it – naturally it fared better. Despite being a less logical film, A Nightmare on Elm Street is the more imaginative and far less predictable of the two; Dreamscape is more prosaic in nature with director Joseph Ruben never allowing the film to take full flight of surrealistic fancy the way Wes Craven did in Elm Street. Where Craven invoked sharp and disturbing incursions of dream into reality and delighted in turning things on their head, Dreamscape plods along with routine political assassination and sinister government agency plots. The film is no different in look and pacing from a made-for-tv movie.

Director Joseph Ruben later went onto make the great The Stepfather (1987) and a couple of other mainstream psycho-thrillers, Sleeping With the Enemy (1991) and The Good Son (1993), and ventured back into the science-fiction genre with the interesting The Forgotten (2004).

Dreamscape was also the first screenwriting credit of Chuck Russell, later director of the likes of A Nightmare on Elm Street III: The Dream Warriors (1987), The Blob (1988), The Mask (1994), Eraser (1996), Bless the Child (2000) and The Scorpion King (2002). Producer/co-writer Bruce Cohn Curtis is the grandson of the legendary Jack Cohn, the founder of Coumbia pictures.