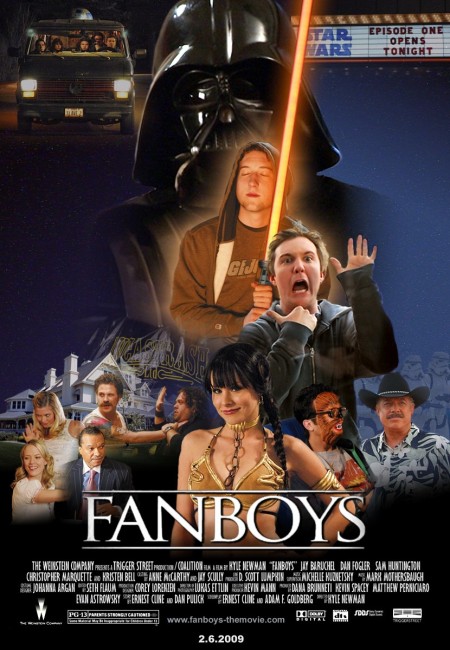 Ohio, 1998. At a party, Eric Bottler meets up with his school friends Hutch, Windows and Linus for the first time since school. They are still nerdy Star Wars fans while Eric has gone on to work as a salesman at his father’s car dealership. As they reconnect, the others inform Eric that Linus is dying of cancer and does not have long to live. Eric returns to the others a few days later and presents them with a plan for what they always had wanted to do since school – to go on a road trip to California, break into George Lucas’s Skywalker Ranch and watch Star Wars Episode I: The Phantom Menace before anybody else. Windows’ online girlfriend claims that she can get them the plans to the Skywalker Ranch. Agreeing on this madcap scheme, they set out to California in Hutch’s van. Along the way, they must deal with angry Trekkers, being forced to perform in gay biker bars, being arrested for possession of peyote, psychotic pimps and other adventures.

It used to be that fans showed their enjoyment of films and tv series by gathering at conventions, publishing their own zines and the like. However, Star Wars (1977) brought out of the woodwork a generation of fans that grew up on the science-fiction movies of previous eras and started making their own movies where they regularly homaged the works they loved as children. By the end of the 1990s, another entire level of recursion had been added to this as fans started making their own films about being fans. Star Trek led the way with works like Trekkies (1997) and Trekkies 2 (2004), documentaries that charted the fan phenomenon; Free Enterprise (1998), a very funny effort about the lives of Star Trek fans; and the fictional GalaxyQuest (1999), which played with Star Trek fandom in an hilariously meta-aware way. Other efforts followed – the British tv movie Cruise of the Gods (2002); Mark Hamill’s hilarious mockumentary Comic Book: The Movie (2004) and Morgan Spurlock’s more straight-faced documentary Comic-Con Episode IV: A Fan’s Hope (2011) both set around the San Diego Comic-Con; the documentary tv series Con Trek (2009) that toured various conventions; Frequently Asked Questions About Time Travel (2009) with fans caught up in a time travel adventure; The Last Lovecraft: Relic of Cthulhu (2009) about H.P. Lovecraft fans; Paul (2011) about fans encountering a real alien; Rise of the Fellowship (2013) about Lord of the Rings fans and gamers; and Fanboys, which concerns itself with Star Wars fans; as well as the subsequent documentary The People vs. George Lucas (2011) even an entire tv series The Big Bang Theory (2007-19) set around fans and fannish in-jokes. Elsewhere, places like YouTube created a boom industry of amateur fan-made films, with there even being film festivals of Star Wars fan films.

Fanboys came out amid considerable fan buzz (and controversy). The script is by two newcomers – of these, the then unknown Ernest Cline subsequently went onto publish the 2011 novel that became the basis of the Steven Spielberg film Ready Player One (2018). The script was brought up by The Weinstein Company and placed into the hands of Kyle Newman, who had previously directed a handful of shorts and the Legend of Sleep Hollow modernisation The Hollow (2004). George Lucas was amused and approved the film, even allowing Newman and co the use of the Skywalker Ranch for sound mixing. Various Star Wars associated peoples – Carrie Fisher, Billy Dee Williams, Ray Park – signed on to make cameos.

Problems began around the end of 2007. The Weinsteins were unhappy about the film that Kyle Newman turned in and hired Steven Brill, the director of light comedies such as Little Nicky (2000), Mr Deeds (2002), Without a Paddle (2004), Drillbit Taylor (2008) and Hubie Halloween (2020) to direct reshoots. The Weinsteins clearly wanted to push Fanboys less in the direction of a film that played to its fanbase and more along the lines of a mainstream Judd Apatow comedy, in particular the loser nerd comedy of The 40 Year Old Virgin (2005). The most controversial of Steven Brill’s changes was the elimination of the plot about Linus having cancer with the film then becoming one where the group simply decided to set out to California on a sudden whim after a few drinks at a party. Brill was not a Star Wars fan and had not even seen the original trilogy, which caused much dissatisfaction with fans. This caused an uproar with fans creating a ‘Stop Darth Weinstein’ project, putting up MySpace pages and threatening a mass boycott of the Weinstein produced Superhero Movie (2008) if the original version was not restored. Steven Brill shot himself in the foot by writing abusive and threatening emails to fans, which were then leaked onto the internet. Eventually, both versions of the film were screened for convention audiences who voted on the original as the superior one. However, Kyle Newman was given only 36 hours to edit his version together. The film dithered about in limbo for more than a year, finally only being granted a limited theatrical release in February 2009.

Thought it makes a pretence of hating Star Trek fandom, the plot of Fanboys is very similar to Free Enterprise. Both films largely centre around witty and sophisticated in-jokes that are pitched to the fan audience. In both films, fandom is seen as a prolonging of adolescence beyond the point it should have been and both films become in essence rite of passage films about the maturation of its single males into dealing with the mundane forces of the real world. To make the point clear, both films feature William Shatner as himself – a role in which Shatner chooses to parody his own image and where both films regard him as fandom’s ultimate icon of cool.

Fanboys comes packed with witty Star Wars and George Lucas gags – debates about whether it was incest or whether Princess Leia knew they were related when she kissed Luke in Star Wars. There is a cop car chase sequence for the sole purpose of having a scene where the van bursts into hyperdrive. There is a very funny cameo from Carrie Fisher as the doctor who okays Chris Marquette to continue on the journey where he gets to play out her famous line, pleading with her: “You’re my only hope.” There is an amusing sequence prowling through the Lucasfilm inner sanctum and finding the memorabilia room where they go over the Star Wars props – we even get references to Willow (1988), while the security guards wear costumes like the robots out of George Lucas’s THX 1138 (1971) and the security system is identical to the computers in use on the Death Star. There is even a scene where the group end up in the studio garbage dump, which is of course a perfect replication of the garbage compactor sequence from Star Wars.

For some reason, the film lays into Star Trek fans with a vengeance. In real life it has been more of a peaceful coexistence, never a fierce tribal war as it is described here but the film gets much mileage out of it (even if the William Shatner cameo ultimately contradicts this). Trekkers are driven out of the comic-book store by Dan Fogler: “Get off our land, you Kirk-loving, Spock fuckers.” There is a highly amusing sequence where they turn up in Riverside, Iowa – the real-life town that claims it is the birthplace of Captain Kirk – and proceed to bait Trekkers, which erupts into a brawl between the two groups after the lead Trekker (an unrecognisable Seth Rogen) sneers “Han Solo is a bitch.”

On the other hand, there are times that the humour falls down into easy, cliched gags. While Free Enterprise had a series of sly gags aimed at those in the know, Fanboys often plays for slapstick, particularly during the scenes running around the casino. The characters are often drawn in broad cliches – the vulgar horndog (Dan Fogler who falls precisely between being a Jonah Hill look-alike and delivering a John Belushi performance), the bespectacled nerd (Jay Baruchel) who is also an asthmatic, the guy (Sam Huntington) divided between real-world responsibilities and his friends. Even Dan Fogler’s gag about employing Jedi mind tricks was done before by Kevin Smith in Mallrats (1995). Some of the sequences like where they are forced to perform in a gay biker bar have an awkward homophobia to them that should in all honesty have ended on the cutting room floor. The film also pays overly nerdish obeisance by having a cameo from Harry Knowles of aintitcool.com (in actuality, played by Ethan Suplee in makeup that makes him look like an obese hippy transvestite) where Knowles is cast as a purveyor of inscrutable wisdom (puh-lease!). The film swings between cleverly conceived fan humour and this broad slapstick. It is hard to know if this may have been the influence of the two different directors but it does feel the film is being pulled two ways at times. Mostly however, Fanboys emerges with a clever amusement.

Kyle Newman has not made much else up until the comedy Barely Lethal (2015). He has directed a couple of web-based motion comics, music videos and Star Wars dvd extras. He also produced the documentary Raiders! The Story of the Greatest Fan Film Ever Made (2015).