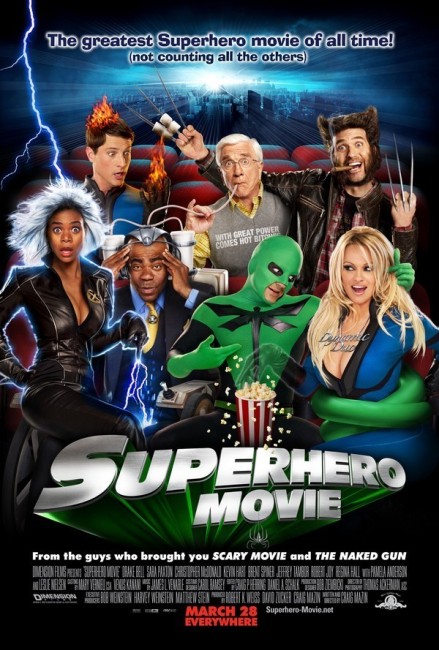 Teenager Rick Riker has an unrequited crush on Jill Johnson, the girl next door, but has never been able to tell her his true feelings. While on a class trip to Amalgamated Pharmaceuticals, Jill’s bullying boyfriend Lance Landers pushes Rick into a heap of animal dung. Rick picks up a spray to clean himself off but does not realize that this is a hyper-pheromone. This promptly causes all animals in the lab to become attracted and mob him. In the midst of this, he is bitten by a genetically modified dragonfly. Afterwards, Rick finds that he has superpowers and so adopts a costume and mask, calling himself The Dragonfly, and sets out to fight crime. At the same time, Lance’s Uncle Lou, the top scientist at Amalgamated, uses a device that will cure the terminal illness he suffers from. This revitalizes and gives him superpowers but makes him dependent on devouring someone’s lifeforce every 24 hours. Landers then adopts a costume and becomes The Hourglass where he makes plans to perfect a death ray that will suck up the lifeforce of thousands of people and make him immortal.

Superhero Movie has been mounted by some of the people who started off the modern movie parody genre. Producer David Zucker co-wrote/co-directed/co-produced Airplane/Flying High (1980), which created the style of the modern movie parody genre, and was also responsible in various capacities for other parodies such as tv’s Police Squad (1982), Top Secret (1984), The Naked Gun: From the Files of Police Squad (1988), BASEketball (1998), Scary Movie 3 (2003) and Scary Movie 4 (2006).

Director/writer Craig Mazin had co-written David Zucker’s Scary Movie entries and had made his directorial debut with an earlier superhero movie spoof The Specials (2000) and at almost completely opposite remove later went on to create the award-winning mini-series Chernobyl (2019). Producer Robert K. Weiss had produced Kentucky Fried Movie (1977) and many of the Zucker parodies, as well as directed the music videos for a number of Weird Al Yankovic musical spoofs and segments of Amazon Women on the Moon (1987).

When David Zucker, his brother Jerry and Jim Abrahams made Airplane and their various other movie parodies in the 1980s, they (and Mel Brooks before them) wittily skewered entire lineages of movie cliches in a non-stop machine-gun barrage. Come the 00s and the Wayans Brothers with the Scary Movies and others like Jason Friedberg and Aaron Seltzer with Date Movie (2006), Epic Movie (2007), Meet the Spartans (2008), Disaster Movie (2008) and Vampires Suck (2010) transformed the movie parody into something else.

Under their hands, the genre quickly became overlaid with a barrage of dick, poop, fart, gay and sex jokes, usually the more vulgar the better. The movie parody turned into something that spoofed less whole genres of film than it existed as a feature-length series of Saturday Night Live (1975– ) skits spoofing scenes from whatever films had come out in the last six months (or threw jokes at celebrities of the last five minutes headlines notoriety). The movie parody has in essence gone from a checklist that runs through movie history to a series of vulgar and sarcastic gags aimed at the MTV generation whose memory span and sense of history runs no deeper than since they last changed the tv channel.

While one held hopes that with David Zucker and Robert K. Weiss on board, Superhero Movie would return more to the classical parody form, it is disappointingly only another Scary Movie styled gag show. It is not as excruciatingly bad as Friedberg and Seltzer’s efforts are but is construed in the same vein that Scary Movie was – that of taking a popular film, in this case Spider-Man (2002), replicating it closely but running as many crude and vulgar gags over the top as possible.

Thus we get a number of jokes about animals humping Drake Bell after he sprays himself with the experimental pheromone; Bell trying to tell Sara Paxton of his feelings for her while Aunt Lucille’s farts keep interrupting them, even killing the budgie and blistering strips off the wallpaper; Leslie Nielsen (a mainstay of any modern movie parody) jumping into the coffin to hump Aunt Lucille’s corpse at the funeral; Drake Bell clinging to the ceiling but having forgotten to zip his fly causing urine to leak and then spray out over Christopher McDonald below; a gag where Aunt Lucille stuffs a turkey with everything from the cat to a pot plant and a bottle of vodka. There is even a spoof of the recent Tom Cruise Scientology interview that was leaked online.

Certainly, Superhero Movie contains a number of parodies of the superhero films that have come out in the last few years, although surprisingly fewer than one might have thought. Most of the gags play on scenes from Spider-Man and sequels. Also included is X-Men (2000) where we get to meet Professor Xavier’s wife and kids who are also bald and in wheelchairs; Fantastic Four (2005) where Drake Bell has to put Johnny Storm out with a fire extinguisher; of Batman Begins (2005) where the young kid’s attempts to stop a mugger are what accidentally kills his parents; and the romantic night flight across the skies of Metropolis from Superman (1978) where Drake Bell gets creamed by a passing helicopter. The most amusing gag is where Drake Bell has to compete with the Johnny Storm look-alike for the rooftop perch to “look seriously out across the city.”

The randomness of much of the film is surely demonstrated by the fact that after the credits start there are still some ten minutes of scenes that were shot but not included in the earlier parts of the film. The film must have been made on a low budget, as there is very little in the way of superheroic antics, while the climactic showdown with the villain is tame.

One of the more amusing pre-release pieces of news was how fans of the film Fanboys (2008) called for a boycott of Superhero Movie because The Weinstein Company, which released both films, had substantially re-edited Fanboys. They need not have bothered as all they had to do was sit back and allow word of mouth to do the job for them and audiences would have stayed away in droves.