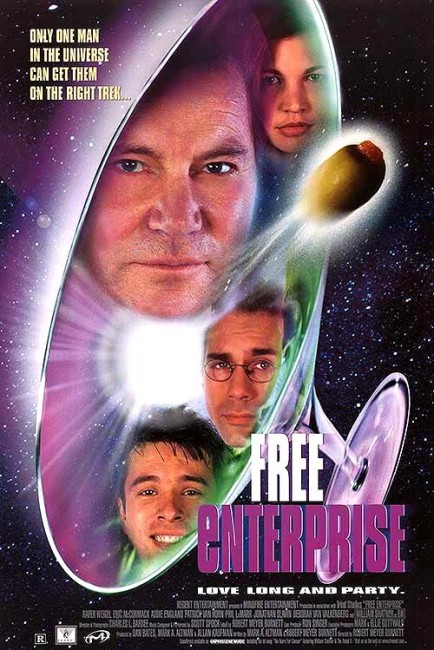 Mark and Robert are two ‘Star Trek’ and science-fiction fans who are now in their twenties and trying to make a break on the fringes of Hollywood. Mark fears his coming thirtieth birthday. Both encounter their childhood idol William Shatner in a bookstore. Shatner asks them to join his plans to make a musical version of Shakespeare’s ‘Julius Caesar’ with him playing all the parts – an idea they both regard as crazy. Robert then meets Claire, a fellow fan, in a comic-book store and both fall heads over heels for one another but at the cost of Robert abandoning responsibility for everything else.

One of the oddest fads of 1999 was a spate of movies about Star Trek (1966-9) fandom. First there was the general release of the documentary Trekkies (1997), followed by the general release of Free Enterprise and the hilarious GalaxyQuest (1999). It was the oddest of fads but also one that was not at all unwelcome as it showed that when it came to sending themselves up, Star Trek fans had a sophistication of wit well and above that of other genre spoofs. Although, as Star Trek spoofs went, possibly even funnier still was the Futurama episode Where No Fan Has Gone Before (2002).

Free Enterprise has clearly been inspired by the films of Kevin Smith – Clerks. (1994), Mallrats (1995), Chasing Amy (1997). In his films, Kevin Smith conducts elaborate monologues about Star Wars (1977) – the discussion about Death Star contractors in Clerks, the Jedi mind tricks in Mallrats. Where Kevin Smith throws in fanboy references as a margin aside, Free Enterprise is almost one entire fanboy in-joke. Furthermore, Free Enterprise is just like Kevin Smith’s films in that its two central characters in that it charts the same story of Gen X slackers surrounded by an excess of junk culture and wryly, reflectively seeking meaning in it all.

The two characters are clear analogues for the screenwriters – Mark A. Altman, the former editor of Sci-Fi Universe and known for his annual 30 page+ analyses of every detail of every season of the various Star Trek series in Cinefantastique, and Robert Meyer Burnett, who wrote for Sci-Fi Universe and has done various production and editing work for studios like Full Moon and the Alterian makeup workshop. The two characters both notedly share the same names as the two screenwriters.

Free Enterprise is filled with a truly amazing number of genre in-references and jokes. When Rafer Weigel’s girlfriend walks out on him, she tosses off a line about how crazy he is for knowing the season the Star Trek episode Requiem for Mars aired – he corrects her to tell her the title was Requiem for Methuselah and not only to tell her that it was the third season but to also give the date it aired. There is a running joke that compares Eric McCormack’s approaching thirtieth birthday to Logan’s Run (1976) – “The fiery ritual of Carousel – I’m turning thirty in three weeks” – even an amusing dream sequence that has an unathletic McCormack in a bad-fitting kaftan being chased as a Runner.

The end credits of Free Enterprise alone are a witty series of genre asides with joke credits interspersed with the regular credits such as ‘Boxie’s Pet – Muffy’ [Battlestar Galactica (1978-9)], ‘Luke’s Father – Darth Vader’, ‘Seen things you wouldn’t believe – Roy Batty’ [Blade Runner (1982)], ‘The Forgotten Gene – Gene Coon’ [a Star Trek producer], ‘The Day the Moon Left the Earth’s orbit – September 13, 1999’ [Space: 1999 (1975-7)], ‘To Serve Man – A Cookbook’ [the name of an episode of The Twilight Zone (1959-63)]. The end Thank You credits whip up some of the most amazingly obscure references, thanking organizations and people such as S.H.A.D.O. [from tv’s UFO (1970-1)], the Korova Milkbar [A Clockwork Orange (1971)], The Seldon Institute of Psychohistory [Isaac Asimov’s Foundation series], Xavier’s School for Gifted Youngsters [X-Men], Queen Starsha of Iscandair [Space Cruiser Yamato (1977)], before noting that William Shatner will return in Shatner vs the World Crime League (a reference to the sequel that never emerged promised in the end credits of The Adventures of Buckaroo Banzai: Across the Eighth Dimension [1984]).

The fan jokes are frequently perceptive and on the ball, like the scene where Rafer Weigel regales a kid in a toy store over the perception that science-fiction started with Star Wars, while throwing scathing barbs at the proliferation of Shadows of the Empire (1996) merchandising. The humour is un-P.C. at times – with Eric McCormack throwing jibes about WWII at a German girl because she won’t kiss him; or an hilarious discussion on Rosemary’s Baby (1968): “Rosemary Woodhouse [played by Mia Farrow] raped by The Devil – she had it coming after what she put Woody through.”

Free Enterprise‘s greatest coup is in being able to cast William Shatner as himself, where Shatner delivers an amazingly self-effacing performance. The film both seriously and unseriously explores the myth of Captain Kirk as childhood hero and male role model, while at the same time poking fun at the gulf between screen character and real-life actor – the film’s Shatner is shown, as opposed to Captain Kirk, to be hopeless when it comes to women. This Shatner also appears slightly cracked to say the least. Shatner daringly allows a number of jokes to be thrown in the direction of his real-world self (something that has occurred considerably in the last few years with gossip column stories accusing Shatner of being a womanising sleaze, his own surprised discovery in his Star Trek Memoirs books that his co-stars hating him, and the exhumation and re-release of his recorded cover albums as hilariously bad junk artifacts). At one point, Rafer Wiegel gives William Shatner romantic advice: “Go and try – she couldn’t hate you any more than your co-stars.” Shatner also parodies his reputation for bad music at the end of the film in a rap version of Shakespeare’s Julius Caesar that has to be seen to be believed.

Free Enterprise is also considerably more than an extended fannish in-joke. It is also a penetrating and perceptive analysis of life as a fan. The two character arcs deal with fanboys and their problems trying to hold onto fannish enthusiasm while the real world tries to force them to grow up. In particular, the plot with Rafer Wiegel romancing Audie England (an actress more known for softcore roles for Zalman King in various episodes of Red Shoe Diaries (1992-9) and films like Delta of Venus (1995) and Shame, Shame, Shame (1998) in a rare clothed role) is sharp and acutely written.

Director and co-writers Robert Meyer Burnett and Mark A. Altman have for a number of years now promised that they will return with William Shatner, Rafer Weigel, Eric McCormack and Audie England for a sequel Free Enterprise 2: My Big Fat Geek Wedding.