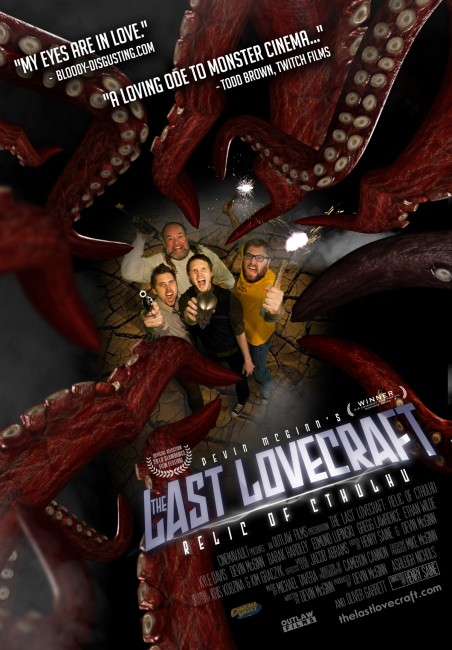 Professor Lake of the Miskatonic University is summoned by the secret Council of Cthulhu and informed that Cthulhu cultists have uncovered an important relic. He is assigned to deliver the sister relic into the hands of the last descendent of H.P. Lovecraft to ensure that the two pieces are not brought together, which would allow Cthulhu to be raised from where he is buried in the lost city of R’yleh on the ocean floor. The last Lovecraft descendent is Jeff Phillips, an average frustrated guy in his twenties who works for Sqrly Gifts. He and best friend Charlie Russell return home to find Lake waiting, although Jeff thinks Lake’s talk about Cthulhu and the Elder Gods is crazy. Moments later, tentacled fish people burst into the house and kill Lake. Jeff and Charlie flee, seeking the company of Paul Reamer, an ultra-nerdy school friend who was obsessed with Lovecraft. The three set out to follow a map that leads the way to Captain Olaf, a sailor who once encountered a Deep One. All along the way they are pursued by the Cthulhu cultists and the monstrous Starspawn who want to obtain the relic.

It was Kevin Smith who gave the nerd comedy its legs with Clerks. (1994) and the cult that followed his subsequent films. Smith’s films frequently feature nerds and frustrated chumps hanging onto adolescence and making wry asides about aspects of pop culture, in particular Star Wars fandom. It was not long after this that various aspects of science-fiction and fantastic fandom started to build on what Smith had created, charting the lives of science-fiction fans. These included the likes of Free Enterprise (1998) and GalaxyQuest (1999) centring around Star Trek fandom, as well as the Trekkies (1997) and Trekkies 2 (2004) documentaries that charted the oddities of the Star Trek fan phenomenon; Mark Hamill’s mockumentary Comic Book: The Movie (2004) and Morgan Spurlock’s more straight-faced documentary Comic-Con Episode IV: A Fan’s Hope (2011) both set around the San Diego Comic-Con; Proxima (2007) where a science-fiction fan is taken on an intergalactic adventure; Fanboys (2008) about Star Wars fans; Frequently Asked Questions About Time Travel (2009) with fans caught up in a time travel adventure; Paul (2011) about science-fiction fans encountering a real alien; Rise of the Fellowship (2013) about Lord of the Rings fans and gamers; even an entire tv series The Big Bang Theory (2007-19) set around fans and fannish in-jokes.

The Last Lovecraft: Relic of Cthulhu chooses as its focus the works of horror writer H.P. Lovecraft. Howard Phillips Lovecraft had a brief writing career (from 1916 until his death in 1937) but in that time managed to create a body of work that has inspired a cult. Lovecraft’s prose brims with a unique sense of cosmic horror – of Earth existing as a tiny island surrounded by unbelievably powerful ancient gods waiting to return, lost cities, arcane rites, scientists whose quest for knowledge has taken them too far and individuals driven insane by sights and horrors so unimaginable they can only be depicted as ‘indescribable’. There is much potential in his works, although there does seem to be something forced in attempting to make a fanboy comedy about H.P. Lovecraft – it is not as though Lovecraft has a fanatical following or entire conventions centred around his works as is the case with Star Trek and Star Wars, at most you might get the odd panel at a convention discussing Lovecraft’s work. Although there do seem to be a surprising number of amateur filmmakers dedicated to making Lovecraft-based films – see The H.P. Lovecraft Film Festival – North (1999) for one such example, while a few years earler we had another Lovecraft fan parody/tribute film with Lovecracked: The Movie (2006) and there was the subsequent Call Girl of Cthulhu (2014).

There are two different ways to read The Last Lovecraft: Relic of Cthulhu – either as a fanboy comedy or as an H.P. Lovecraft film. As a fanboy comedy, The Last Lovecraft has its undeniable amusements – gags about trying to pry the sucker tips of fish people off the passenger window of a car to make a getaway; or the scenes training in the backyard with Barak Hardley playing the role of Cthulhu with a cardboard mask and multiple green inflatable sports shakers for tentacles.

There are some mildly amusing one-liners tossed off – Barak Hardley recoils from the offer to join the expedition “I’m not ready to roll the D9” or his pissed-off friend Martin Starr threatening “I’ll never be your dungeonmaster again.” The two lead characters played by Kyle David and writer/producer Devin McGinn are okay, although the scene-stealer of the film proves to be Barak Hardley who gives a fine performance as the overgrown adolescent tentatively setting out into the world.

The Kevin Smith/fanboy comedy does seem an odd fit when transplanted into the world of H.P. Lovecraft, which almost always centres around people discovering artefacts and ancient monsters from beyond time or unleashing mutations and potentially nightmarish terrors. The typical H.P. Lovecraft story ends with the narrator driven insane by the things they have encountered. All of that said, The Last Lovecraft: Relic of Cthulhu does a fair job of approximating the basics of Lovecraft. Almost all of the mainstream Lovecraft adaptations borrow bits of Lovecraft, make occasional references to his mythos and offer even less occasional glimpses of the intensely paranoid mood that the Lovecraft cult loves. In fact, the amateur Lovecraft films do a far better job of capturing the essence of Lovecraft than most of the professional Lovecraft adaptations do.

The Last Lovecraft is short on intensely paranoid mood – a large part due to its taking a comedy focus – although does offer up a cheaply animated potted encapsulation of the backstory of Cthulhu and the Elder Gods that holds far more of the Cthulhu mythos than all of the professional productions put together. (See below for a full list of H.P. Lovecraft adaptations). That said, you cannot help but feel that H.P. Lovecraft, a noted conservative whose fiction you could read in vain searching for a sense of humour, would probably be turning in his grave at the thought of a fanboy comedy based on his writings.

On the other side of the coin, The Last Lovecraft leaves much to be desired as an H.P. Lovecraft film. The Lovecraftian creations that we get are no more than B-budget monster masks and occasional gore effects. The Starspawn seems singularly lacking in cosmic horror and nothing more than a villain in a red-faced monster mask – shades of Red Skull in Captain America (1990) – making threats and despatching his minions. The animated sequence where Cthulhu starts to return to life in the undersea city of R’yleh is particularly cheap.