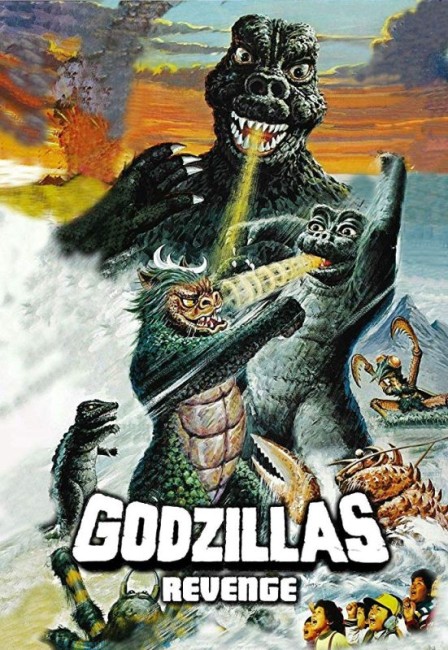 Young Ichiro feels lonely because both his parents are always at work and he is bullied at school. He has a dream where he is on Monster Island. There he is befriended by Godzilla’s son Minya. He helps Minya stand up to another bigger monster Gaborah. As a result of doing this, Ichiro is able to learn how to stand up for himself when two bank robbers on the run abduct him.

Godzilla’s Revenge was the tenth Godzilla film. It marks a major low point in the series. The original Godzilla, King of the Monsters (1954) had been crafted as a force of anger and ferocity, embodying everything that the Japanese felt about Hiroshima and Nagasaki. Gradually, by the time of the fifth film in the series Ghidrah the Three-Headed Monster (1964), Godzilla’s ferocity has been whittled down until he became Japan’s defender and the films became increasingly more comic-bookish.

With Son of Godzilla (1968), an otherwise likable film, and the introduction of his son Minya, Godzilla’s seriousness took an even further nosedive and began its decline into child-oriented, juvenile pratfalls. This reached a nadir with Godzilla’s Revenge which, even though Jun Fukuda’s entries in the 1970s were far more technically inept and much worse films, was an all-time low for the series in terms of childish puerility, particularly in contrast to everything the series had once held.

Godzilla’s Revenge is mostly centred around Minya instead of Godzilla, a focus that considerably belies the ferocity the title seems to suggest. Minya is only there to take pratfalls and give life lessons to the kid. There is much silly nonsense with Minya only able to blow smoke rings instead of radioactive fire and with the kid having to drop a rock on his tail to make him unleash fire properly. The film’s lowest point is having Minya talk with a dubbed voice.

There is also a cartoonishly silly score and sound effects. Special effects man Eiji Tsuburaya was ill throughout shooting and died a few months after the film’s release – as a result, the effects scenes were filled out using scenes taken from Godzilla vs the Sea Monster (1966) and Son of Godzilla.