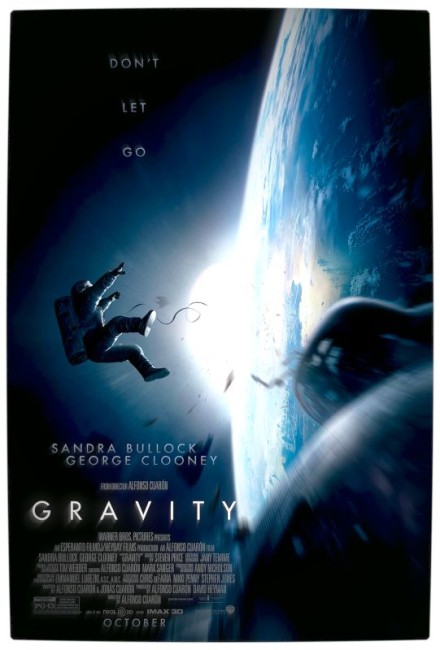 Dr Ryan Stone is a rookie on her first mission into orbit aboard the space shuttle Explorer. She is conducting a repair operation on the Hubble Space Telescope when there comes news that a Russian satellite has been struck and a field of debris is heading their way. Mission commander Matt Kowalski orders her back inside immediately but they are unable to get there before the shuttle is struck. Stone is flung free and drifts through space until Kowalski uses his thruster pack to reach her and connect with a tether. They return to discover that the shuttle has been damaged and the crew killed. Kowalski thinks their only option is to head to the abandoned International Space Station using the thruster pack. They reach it just as he runs out of fuel. Stone manages to grab onto a rope from one of the lifepod parachutes and they are left precariously hanging from this. Realising that his weight will drag her away with him, Kowalski makes the choice to release the tether and drifts off into space to his death. Aboard the station, she attempts to prepare the Russian Soyuz shuttle to journey to the Chinese space station and use an escape pod there to return to Earth. However, further damage by the debris field obliterates the space station and leaves Stone adrift in the damaged Soyuz.

Gravity is a film that appears accompanied some sensational reviews, following its premieres at the Venice Film Festival and the Toronto International Film Festival. The word of mouth for the film has been exceptional with almost all having amazingly praiseworthy things to say about the performance by Sandra Bullock, who ended up being nominated in all the major awards for her role.

Gravity comes from Mexican director Alfonso Cuaron who co-writes with his son Jonas. Cuaron first appeared with the acclaimed Love in the Time of Hysteria (1991) and was quickly snapped up for the English-language children’s film A Little Princess (1995) and the modernised Great Expectations (1998). He returned to Mexico for the teenage sex drama Y Tu Mama Tambien (2001) and then was brought back for the third Harry Potter film Harry Potter and the Prisoner of Azkaban (2004), followed by the international acclaim of the dystopian science-fiction film Children of Men (2006) and subsequent to this the critically celebrated Roma (2018). Cuaron has also created and produced the short-lived tv series Believe (2014) about a young girl with psychic powers on the run, as well as produced the true life psycho film The Assassination of Richard Nixon (2004), his son Jonas’s film Desierto (2015) about a white vigilante hunting Mexican illegal immigrants through the desert and Robert Zemeckis’s remake of The Witches (2020). Gravity is also produced by Harry Potter series producer David Heyman.

There have been films about space mission disasters before. Gravity has nominal similarities to Marooned (1969), a John Sturges film that focused around a trio of NASA astronauts abandoned in orbit inside a capsule following a mission failure. Starflight One (1983) and Spacecamp (1986) were other barely serious treatments on the theme of vessels trapped in orbit. There is of course a good deal of similarity to Ron Howard’s similarly widely praised and awards-friendly Apollo 13 (1995), a dramatisation of the true-life space mission disaster that occurred in 1970. The film that one kept being reminded of most though was Brian De Palma’s unjustly reviled Mission to Mars (2000), which had a very similar, scientifically authentic sequence where astronauts attempt to rescue a crew member who is adrift in orbit, of which Gravity often feels like a feature-length expansion of that scene.

An extraordinary amount has gone into Gravity. Unlike Apollo 13 where Ron Howard shot in the famous Vomit Comet, a high-flying NASA plane that allows a brief period of zero gravity as it conducts a steep rise and dive, virtually the entire film has been shot greenscreen or with the two actors in motion capture suits and the surroundings digitally inserted later. This allows them to easily replicate zero g physics without the usual clumsy effects of actors and a couple of pens floating in front of their face on wires we have had in lesser-budgeted space travel films. Cuaron talks how the movements that Sandra Bullock conducted were rehearsed down to the nth degree, even how the way she breathes on screen was used to convey emotion.

The results show through impressively on screen. This is one of the few science-fiction films that show the reality of space – the vastness, aloneness and coldness of the void, and especially how one is removed from notions like up and down or the assumptions that something will fall or can be picked up when you drop it. Films and tv shows like Star Wars (1977) and Star Trek: The Next Generation (1987-94) have given us what you could call a cuddly version of space – where planets and solar systems seem no more than a plane flight apart, where gravity is something that is conveniently ignored with magic terms like ‘artificial gravity’ or ships can bank and roll like WWII fighter planes, and where sound effects are allowed to carry in a vacuum. Gravity restores scientific credibility to its depiction. Contrast the intensity of the space scenes here with the spacesuit flight through the debris field in the same year’s Star Trek: Into Darkness (2013), which played it as an action sequence, and you see how much more there is here simply by treating everything with a rigorous scientific realism.

The film is welcomely scrupulous about the airlessness of space, thus there is no sound in the vacuum – we see explosions occurring behind people in total silence. There is a dazzling scene where George Clooney re-enters the Soyuz and Sandra Bullock sits in terror as the air goes out as he opens the airlock door and he enters the capsule in his bulky suit, wrestling into the seat beside her all in complete silence. Everything in the film is conveyed by the voices on the radio and the distant clank and rumble of ships docking. No wonder then that the score goes into overdrive to create the drama that the silence cannot. The scientific credibility goes even further than that – down to tiny touches like when Sandra Bullock cries, the tears form into droplets that float up and away from her eyes unnoticed, or seeing the fire inside the International Space Station forming in tiny globules. The film probably can get no better kudos in this department than having real-life astronaut Buzz Aldrin call it “remarkable.”

The drama that Alfonso Cuaron manages to build is sensational. When the camera is up in orbit, you are dazzled by the depth and clarity of the images of the Earth below, the beauty of the sunrises coming up behind the shadow of the world or the aurora at play over the poles. There is the intense effort made to place one inside the experience of being in orbit – from shots from inside the space helmets to the way the 3D camera twirls and moves with a sinuous elegance as though it too were weightless.

The first few minutes of the film with the camera drifting around the Hubble and shuttle, floating with them in silence but for the chatter of their voices and mission control or country music playing on the radio, leaves the entire audience dazzled. As too does the abrupt drama of Sandra Bullock being swung away from the space arm and her panic at being left spinning as she drifts off into the empty void of the night, followed by George Clooney’s subsequent jetpack rescue.

Some of the scenes leaving you gouging the armrest with the sheer tension – the breathlessness of the docking with the International Space Station where Bullock is left hanging off a parachute rope by her foot with Clooney threatening to tug her away and she begging him not to release the tether. Especially hair-raising are the scenes where the debris impacts with the International Space Station while she is out untethering the Soyuz and we see the space station exploding behind and all around her in silence and are expecting her to be hit at any moment. Not to mention her hair-raising leap into the void across to the Chinese space station. It is that example of the rare film where one’s adrenalin is still pumping as you leave the theatre and head home.

What is being talked about more than anything in the film is Sandra Bullock’s performance, which she plays with an enormous degree of conviction. What must be said is that is feels a role tailor made for Bullock’s slightly shy and awkward persona. Bullock was apparently one of many actresses considered for the part. Angelina Jolie was associated for some time, and after her departure a number of other actresses, including Blake Lively, Natalie Portman and Scarlett Johansson were touted in the role. Seeing Bullock in the role, it seems hard to conceive Jolie with her perfect collagen pout and cat eyes subsuming herself to the part, while it surely would have been totally out of the acting range of any of the others – could you really say that you think Blake Lively, another anonymous Hollywood blonde, would be capable of accruing awards quality acting in the part? Or that 2006’s It Girl Johansson would be capable of being anything other than Scarlett Johansson playing an astronaut? George Clooney slots into his role with the effortless charm and charisma he seems to have off in his sleep by now.