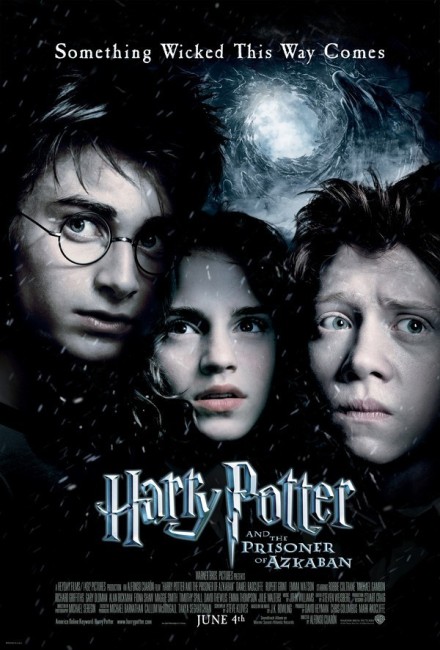 After she insults his father, an angered Harry Potter magically inflates his Aunt Marge like a balloon and causes her to float away. He flees the Dursley home but is rescued by the Knight Bus, which services wizards, and brought back to Hogwarts. He is warned that a dangerous criminal Sirius Black has escaped from Azkaban Prison and is lurking in the area. Sirius Black was an associate of Lord Voldemort and it is believed he is coming to kill Harry. Meanwhile, the fearsome Dementor guards from Azkaban are brought in to watch over the school. However, when the Dementors touch Harry’s mind, this proves as terrifying as the threat of Sirius Black.

The Prisoner of Azkaban was the third of the Harry Potter films, based on the phenomenally best-selling books by J.K. Rowling. The two previous films Harry Potter and the Sorcerer’s Stone/Harry Potter and the Philosopher’s Stone (2001) and Harry Potter and the Chamber of Secrets (2002) were enormous worldwide hits. Despite their popularity, I never liked the books much. Nor for that matter either of the first two films where any magic and wonder was killed off by director Chris Columbus’s banal approach and persistent attempt to batter the audience with special effects, which ended up contrarily producing no wonderment whatsoever.

For the third film, Chris Columbus has chosen to step back and hand control over to Mexican director Alfonso Cuaron. Alfonso Cuaron is certainly a surprising and controversial choice in that his previous film to make it to English-language speaking audiences was Y Tu Mama Tambien (2001), a raw and frank account of teenage sexuality and about a 180 degrees remove from the pre-pubescent innocence of the Harry Potter universe as one could imagine. On the other hand, one of Alfonso Cuaron’s previous ventures into English-language Hollywood filmmaking was the delightful A Little Princess (1995), a quasi-fantastical children’s film that conjures a certain magic that is not too far removed from the Harry Potter universe. Cuaron’s one other Hollywood outing at this point was the banal modernization of Charles Dickens’ Great Expectations (1998), however he would subsequently go onto direct the fine dystopian sf film Children of Men (2006), the excellent Gravity (2013) about two astronauts trapped in orbit and the critically celebrated Roma (2018).

As though all that it took was a change of directors, Harry Potter and the Prisoner of Azkaban emerges as a quite good Harry Potter film. In the previous two films, Chris Columbus’s direction was bland, sentimental and mawkish, substituting cliché emotional cues for any real drama. On the other hand, Alfonso Cuaron has a much better sense of drama and a perfect ability to make the special effects overkill of Chris Columbus’s films take a backseat to the telling of the story, not become a substitute for it.

There is another quidditch game sequence this time but the sequence is not constantly trying to wow us with the numbers of people spinning around on broomsticks and high speed chases but concentrates on the drama of Harry’s mid-air fall. Other scenes like the meeting with Hippogriff are not attempting to dazzle you with the effects but on creating a near-perfect sense of wonder during the meeting with and the bowing down of the creature. Other effects-driven scenes like the attack by the tree and especially the scene driving the Dementors away at the climax work with all the amazement and wonder that they should. We have the first sense of one of the Harry Potter films telling the story of the book in a dramatic way rather than Chris Columbus’s films, which seemed more like hurried, potted accounts of the main incidents of the books.

Alfonso Cuaron gets much more finely shaded performances from his cast, especially the newcomers, with Gary Oldman and particularly David Thewlis giving subtlety and depth to what are fairly one-dimensional roles in the book and Emma Thompson proving a scene-stealer as the batty tealeaf-reading expert.

The Prisoner of Azkaban is also a much darker Harry Potter film. This is something we started to see in The Chamber of Secrets and starts to grow here. You can tell from the opening, which plays on the Warner Brothers logo in much the same way that Tim Burton’s magnificent and moody duo of Batman films did. The predominating colours throughout are black and midnight blue, while the central character at one point makes a determined decision to kill the villain of the show. Alfonso Cuaron creates some wonderfully scary and suspenseful scenes with the appearance of the Dementor on the train and particularly during a marvellously eerie venture into the darkened hallways of the school at night.

As with the other films, the main problem one has with Harry Potter and the Prisoner of Azkaban is J.K. Rowling’s writing itself. In the books, Rowling has a bad tendency to overstate and heavily signpost her dramatic cues, as well as come up with annoyingly convenient deus ex machina plot devices that are not dramatically earned. As I accused Harry Potter and the Chamber of Secrets of doing, Harry Potter is an unearned hero whose triumph all comes handed to him.

This is not so bad here – there is a climactic scene where Harry wins the day by standing up to become a heroic wizard – and the time travel plot gives the latter quarter of the film a certain fascinated cleverness. However, Harry still gets most of his knowledge and ways in and out of scrapes handed to him by others – the twins giving him the map, Hermione standing up against Malfoy, Hermione producing the time travel device, the bus just appearing to rescue him. You do keep wondering what it actually is that Harry does that makes him so great as everybody keeps saying.

However, the biggest complaint about Harry Potter and the Prisoner of Azkaban is the villain. The entire film builds Sirius Black up as a total blackguard of the most evil order. He is considered a murderer, a disciple of Lord Voldemort, the photos of him circulating show him as a screaming madman, he has the magic world in a panicked uproar at his escape, even manages to scare one of the ghosts in the paintings (an amusing cameo from Dawn French) into hiding. Yet when Sirius Black is finally encountered he turns out to be … a fairly decent chap who is misunderstood and with Harry overwhelmed to accept as a substitute father figure. Dramatic reversal of expectations is one thing but this is misdirection to the point that it is dramatically false. The moment that Gary Oldman is found any hint of the threat and sinisterness that he earlier manifested vanishes and is forgotten about.

In genre material, Alfonso Cuaron has also created and produced the short-lived tv series Believe (2014) about a young girl with psychic powers on the run, as well as produced the true life psycho film The Assassination of Richard Nixon (2004), his son Jonas’s film Desierto (2015) about a white vigilante hunting Mexican illegal immigrants through the desert and Robert Zemeckis’s remake of The Witches (2020).