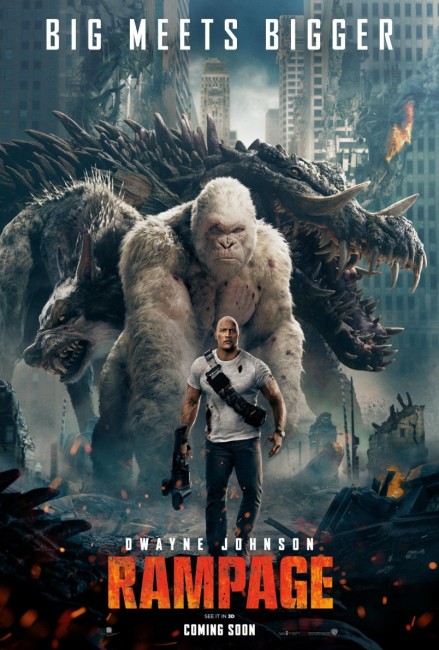 The Energyne corporation has been conducting research with CRISPR genetic editing techniques aboard a space station. The station is then destroyed when a giant rat created by the experiments gets loose. Davis Okoye is a primatologist at the San Diego Wildlife Sanctuary. His prize exhibit is George, an albino gorilla he saved from poachers, and with which he has developed a sophisticated language of hand signals. Overnight, debris from the space station comes crashing down in the zoo enclosure where it is touched by George. When Davis comes to work in the morning, he discovers that George is growing in size and has become more aggressive. The debris has also created a giant wolf and crocodile where it has landed elsewhere. Davis is contacted by Dr Kate Caldwell, the scientist who created the CRISP technology with peaceful intent before it was appropriated by Energyne. George gets loose and goes on a rampage and has to be tranquilised. The military come to fly him away, taking Davis and Kate prisoner. However, Energyne head Claire Wyden activates a homing signal that makes the animals head towards Energyne headquarters in Chicago. This causes a maddened George to tear his way out of the plane in mid-air. With only Kate knowing how to stop the menace, she and Davis head to Chicago as the now giant-sized animals rampage through the city, proving unstoppable against anything the military bring to bear against them.

Not to be confused either with the courtroom serial killer drama Rampage (1987) or else Uwe Boll’s Rampage (2009) and sequels about a man on a shooting spree, this is a film based on the arcade videogame Rampage (1986), created by the US company Bally Midway. In the game, players controlled either George, a giant ape; or else a giant wolf or a giant lizard creature as they rampaged through assorted urban landscapes, attacking and eating people (gaining points for who or what you ate), while avoiding attempts to shoot them down. The game was sufficiently successful that several sequels were made, along with home computer versions.

The film version of Rampage has been taken up by Brad Peyton who first appeared as a director with Cats & Dogs: The Revenge of Kitty Galore (2010) and then began his association with Dwayne Johnson in the Journey 2: The Mysterious Island (2012) followed by the disaster movie San Andreas (2015). In between this, Peyton also took the time to make the horror film Incarnate (2016) for Blumhouse.

Brad Peyton’s films don’t exactly shine as bastions of cinematic achievement, they are fairly and squarely popcorn films that seem intended to be as uncomplicated and unchallenging as possible. San Andreas was an earthquake mass destruction film that avoided any idea of people being killed; Journey 2: The Mysterious Island reduced Jules Verne’s desert island survival story to an inane kid’s movie.

So it is that one approaches Rampage with very little in the way of expectation – I mean, the idea of Dwayne Johnson facing a giant gorilla in an adaptation of a 1980s arcade game doesn’t exactly shout out Academy Award material that offers a profound comment on the human condition.

On the other hand, Rampage surprises you. It’s a zero expectation cartoon film, it has gratuitous mass destruction, it has Dwayne Johnson as best friends with a giant ape but it works in a goofily entertaining way. One of the charms of the film is the relationship between Dwayne Johnson and George. Johnson and the big CGI ape joke and bounce off one another with a winning camaraderie that steals much of the opening and end scenes. Indeed, this gets a whole lot more entertaining than any of the human relationships in the film (although Jeffrey Dean Morgan gives a hugely over-the-top performance in an effort to catch up). Johnson even seems to be much more animated than he usually comes across as being.

On a level of basic science, Rampage is nonsensical. Its’ treatment of genetic engineering as something that one can snip and transplant into another animal with no respect as to whether it makes sense to the animal’s structure is absurd science – a wolf, even a regular sized one, would not be able to support wings (or at least ones that would allow it to fly) no matter how cool the image looks on screen.

Largely, the film has been construed as little more than a series of mass destruction scenes. In this department, Brad Peyton goes to town with an excess only rivalled by directors like Roland Emmerich and Michael Bay. He creates the film as a series of spectacular set-pieces – George going amok on board a military transport plane – a scene undeniably reminiscent of last year’s The Mummy (2017); a great shot where a wolf leaps off a cliff to snatch a helicopter in its jaws in mid-air.

The film’s highlight is the last quarter of the film with the animals causing copious mass destruction in Chicago and Dwayne Johnson in the midst, including one scene where he conducts what would almost likely be a fatal exercise in real world physics of surfing a collapsing skyscraper down to the ground inside a damaged helicopter. Like a Bay and Emmerich film, you can sit back and enjoy these scenes for the ability to watch effects houses at the top of their game doing amazing things and the pure pornographic spectacle of watching things being destroyed.

On the other hand, you get the impression that Brad Peyton is very much a director who wants to be another Emmerich or a Bay. His films since 2010 have been those of someone experimenting with styles – kid’s films, the disaster movie, the horror film – without settling onto anything in particular. With San Andreas and Rampage, his favoured style seems to be the mass destruction spectacular. Even then, his films are oddly without much affect. They have a certain wow factor but plots that seem even more simplistic than Emmerich and Bay’s manage to get (and that takes some doing). The criticism you could make of Peyton’s mass destruction spectaculars is that they array some of the world’s top technologies to produce astounding visions of mass destruction but you walk out forgetting what happens five minutes later.

(Winner for Best Special Effects at this site’s Best of 2018 Awards).