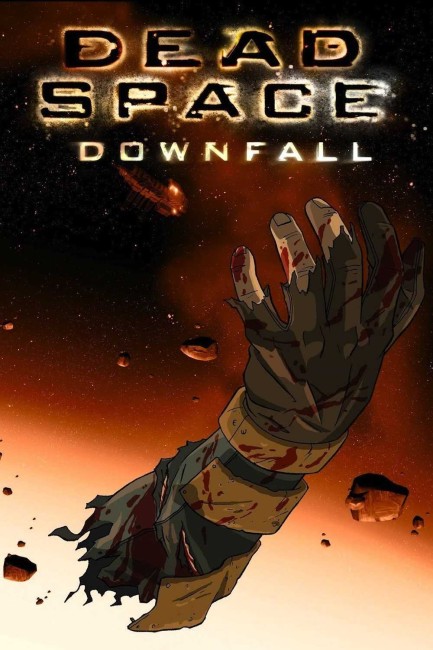 An alien artifact of great potential importance is unearthed at the mining colony on the planet Aegis 7. The spaceship Ishimura is despatched to retrieve it. As the crew bring the artifact aboard, it is discovered that all of the colonists have been slaughtered, however Captain Mathius forbids security head Alissa Vincent from investigating. As the Ishimura prepares to depart, one surviving colonist takes the body of his wife, who has killed herself rather than allow her body to be taken over by a hostile lifeform, and flies up in a shuttle, crashing in the Ishimura hangar. The alien entity that has inhabited her body flees into the ship where it rapidly starts to spread, killing crewmembers and then taking over their bodies as hideously mutated creatures. Alissa and her team are forced to fight a brutal, gore-drenched battle as the reanimated and mutated dead quickly eviscerate their numbers.

Dead Space (2008) was a popular videogame from Electronic Arts that was released to multiple platforms. In the game, the player is the engineer Isaac Clarke who is sent to investigate the spaceship Ishimura after receiving a distress call. Clarke and his team find the ship deserted and taken over by reanimated dead known as Necromorphs that are being controlled by an alien artifact called the Red Marker. Through the course of the game, one is able to piece together various information displays and learn the story of how the Red Marker was found on the colony of Aegis 7 and sought by the Church of Unitology. Electronic Arts have released two game sequels Dead Space 2 (2011) and Dead Space 3 (2013) that continue the story and back mythology.

Dead Space: Downfall is designed as a prequel to the first Dead Space game and was released a mere two weeks after the first game premiered. It tells the backstory of how the Necromorphs came to be aboard the Ishimura, the problems caused by the removal of the Red Marker from Aegis 7 and the captain who was a member of the Church of Unitology. (Certainly, this is not a film that requires you to have absorbed masses of game backplay canon in order to enjoy it as a standalone film).

Dead Space belongs to a variety of Survival Horror games that have become their own genre since Resident Evil (1996) and its ilk. With its spaceship setting, what the film ends up resembling on screen is fairly much another copy of Alien (1979) with a crew facing alien nasties hiding in a ship’s darkened corridors.

The animation is average in terms of quality. The set-up for the film seems typical of the Alien-inspired genre and leads one to expect nothing too standout. Before sitting down, your first thought is that gore and splatter lacks the same viscerality and just doesn’t work as effectively when it comes to animation in comparison to live-action. This is perhaps why the film goes to such an extreme to compensate.

One’s expectations are abruptly blown away when it comes to the first scenes of the possessed creatures tearing apart the dead and gutting dead bodies. As the onslaught intensifies, the film rapidly takes on the level of a phantasmagoric nightmare, tossing up an array of outlandish creatures and pitting the heroes of the show against them in a gore-drenched battle to the death. What the film may lack in the effectiveness of animated gore, it makes up for in terms of intensity and way-out nightmarishness. The film would have been utterly mind-boggling if it were made in live-action; as it is, it is a more than solid and satisfying entry.

There was a further Dead Space film with Dead Space: Aftermath (2011). As with both of these films, they have made with attention to and fit in closely in terms of continuity to the game’s canon.