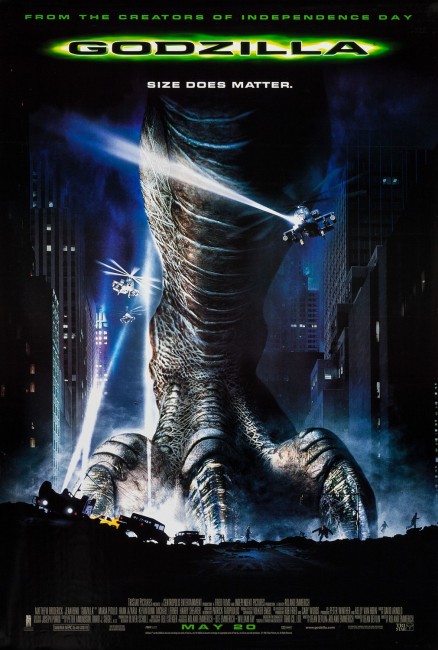 Dr Niko Tatopolous, a biologist with the US Atomic Energy Nuclear Regulatory Commission and a specialist in radiation-mutated lifeforms, is flown to the South Pacific to investigate reports of a giant lizard, mutated as a result of French nuclear testing, that is attacking shipping. The creature, nicknamed ‘Gojira’ by a Japanese survivor and mispronounced as ‘Godzilla’ by the American media, heads to the US. It surfaces in Manhattan where it rampages through the city streets, causing mass destruction. As the military make all efforts to stop it, Niko tries to alert them to the fact that it has laid a nest of eggs somewhere in the city.

Sometimes one just ends up scratching their head and wondering what it is that drives public tastes and/or the opinion of critics. Two years earlier when Roland Emmerich’s Independence Day (1996) became less of a film than it did an event, this critic ended up scratching his head and wondering what made everybody go so crazy about something so one-dimensionally cliched and simplistically flag-waving. When it came to Godzilla, one found themself in almost the opposite position. Despite a mega-hype build-up that announced that the film was from the same people as and would be even bigger than Independence Day, Godzilla opened in the US and confounded expectation to become a colossal flop with the public and critics alike everywhere rushing to junk it. In fact, Godzilla is not a bad film at all. If the truth be told it is the most enjoyable, unpretentious out-and-out monster movie that has come this way in some time. Why all the negative hoopla is frankly beyond one – perhaps it is the very absensce of flag-waving that disappointed people.

One did not expect much from Godzilla. Director Roland Emmerich and his co-writer Dean Devlin do not make particularly good science-fiction. Dean Devlin writes by cliche and Roland Emmerich directs in simplistic emotional cues and their combined body of work – Universal Soldier (1992), Stargate (1994), Independence Day, The Patriot (2000) and Independence Day: Resurgence (2016), as well as works they have produced such as the tv series The Visitor (1997) and films such as The High Crusade (1994), The Thirteenth Floor (1999) and Eight Legged Freaks (2002), and Emmerich’s solo films The Day After Tomorrow (2004), 10,000 BC (2008), 2012 (2009), Anonymous (2011), White House Down (2013), Stonewall (2015), Midway (2019) and Moonfall (2022) – lacks anything appreciable in the way of original ideas or challenging treatments of themes. Independence Day is the best example of their faults – mindless mega-scale special effects for their own sake and the substitution of election campaign-type populist sentiments in the place of drama. Stargate was their best film up to this point, which at least counterbalanced their cliched writing with Roland Emmerich’s forte – the ability to conjure an effectively dramatic sense of wonder across an epic widescreen canvas.

Godzilla is of course an updating of the long-running Japanese monster series begun with Godzilla, King of the Monsters (1954). (See below for the other Japanese Godzilla films). Emmerich and Dean Devlin do some occasionally clever updatings – in an amusingly contemporary touch, the creature has been mutated to giant-size by French nuclear testing in the Pacific. Mostly though the script is terrible. There is the prize piece of bad writing where Matthew Broderick is able to employ a human pregnancy test kit to determine that Godzilla is about to give birth. The characters are conceived as no more than caricatures – the French are snobbish about American junk food; Michael Lerner’s mayor (who in a snide aside is a pompous windbag who has been named after Roger Ebert) is a caricature that has been lifted straight from Murray Hamilton’s mayor in Jaws (1975); Lerner and Harry Shearer’s news anchor are set up as self-important straw figures whose only character arc is to fall on their faces. (Although, to be fair, this is more characterisation than most of the human figures get in the Japanese Godzilla films). The good thing about Godzilla is that it rarely ever slows down enough to allow these one-dimensional figures time on screen.

Godzilla is at its best when it is without any pretensions doing exactly what it has been designed to do – being a BIG scale, big-budget, rollercoaster ride of a monster movie. This is something at which it succeeds more than admirably. Whenever Godzilla turns up on screen, Roland Emmerich unleashes some top drawer special effects – enthralling scenes of mass destruction with it smashing its way through downtown Manhattan, stomping on vehicles and ripping swathes through entire skyscrapers with its tail; an oddly Star Wars (1977) Death Star trench-styled battle with it being pursued by army helicopters amid canyons of high-rise towers; an immensely exciting climax with it rampaging across and being trapped in a suspension bridge. Emmerich only unveils the creature gradually and keeps the camera down at ground level so as to heighten the sense of scale even more so.

The complaint might be that Godzilla is not the iconic character here that the Japanese version was. In 1954, Godzilla was a potent symbol of Japan’s pain and suffering in the aftermath of Hiroshima and Nagasaki. Over the next few film appearances, Godzilla gradually changed to become in effect a superheroic defender of Japan. The 1990s/2000s revivals of Godzilla have been undecided as to whether it is monster or hero. In this film, Godzilla is clearly a rampaging monster but there is never the symbolic resonance it had in the 1954 film; what we have is just a monster movie. Godzilla is given an anonymous and uninteresting new design, much of which is hidden by the low angles, murky cinematography and the shooting in perpetual rain.

Godzilla was one of a host of big-budget monster movie remakes to come out around the same time – the same year also saw the remake of Mighty Joe Young (1998), while there had also been Peter Jackson’s originally announced remake of King Kong (2005), which ended up being delayed for a few years. All of these were clearly greenlit in the wake of the massive success of Jurassic Park (1993). Godzilla is essentially a Japanese Godzilla film reconceived by way of Jurassic Park – this film makes a good deal more sense when you think of Godzilla as a variant on the T-Rex from that film. The middle of the show is bent out of shape to add a series of scenes with the principal characters fighting off a lethal bunch of baby Godzillas, which feels exactly like it has been intended to introduce velociraptor-lookalikes. Certainly, as a Jurassic Park-styled monster movie, as opposed to a Japanese monster movie, Godzilla works rather well. I would be prepared to argue that it is the best film from Roland Emmerich to date.

(Nominee for Best Director (Roland Emmerich) and Best Special Effects at this site’s Best of 1998 Awards).