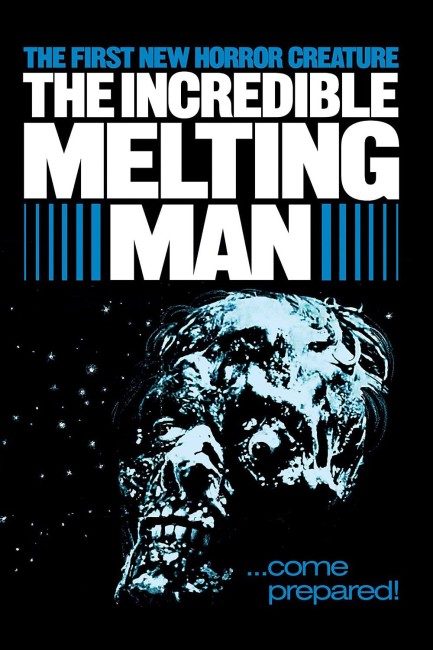 NASA astronaut Steven West returns to Earth, the only survivor of a three-man expedition to Saturn. Scientists discover that he is suffering from a disease that is causing his flesh to melt. The only way he can replace his deliquescing flesh is to devour that of others. Escaping from hospital, West is hunted by authorities as he tries to devour enough flesh to stop melting, while also trying to get back to his wife.

The Incredible Melting Man is a 1970s B film that fondly recalls 1950s mutating astronaut films such as The Quatermass Xperiment/The Creeping Unknown (1955), Night of the Blood Beast (1958), First Man Into Space (1959) and The Hideous Sun Demon (1959). Even the title it chooses could have served as a perfect example of one of AIP’s design-the-poster-first-then-a film-to-go-with-it titles back in the 1950s.

As it is, The Incredible Melting Man is an average film of no particular distinction. However, it gets a great deal of mileage out of its gooey effects. These were the work of Rick Baker who was then just starting to become known as a name, having come from playing the role of the ape in King Kong (1976) and soon to go onto his award-winning work on An American Werewolf in London (1981) and Greystoke: The Legend of Tarzan, Lord of the Apes (1984) and solidifying a reputation as one of the top makeup artists in Hollywood. Baker has an enormous amount of fun creating faces with liquefying eyeballs and ears and teeth exposed beneath melted lips. Indeed, without these effects, there would be nothing to the film.

There are occasional moments where director William Sachs creates some feeling for its title creature as Alex Rebar stumbles around the countryside, longingly looking into lit homes. The ending with a janitor sweeping up the melted remains of Rebar, intercut with stock footage of a rocket launch and an overlaid voice announcing the start of the second Saturn mission, which has been wished well by the crew of the first one, still in quarantine, is suitably sardonic. It is not a great film but on the other hand it is not the total turkey and unintentional laughfest that some critics tried to turn it into for years afterwards either.

Director William Sachs next went onto make the silly Galaxina (1980), the children’s haunted house film Spooky House (2002) and a handful of other non-genre works. People can also note Oscar-winning director Jonathan Demme of The Silence of the Lambs (1991) in a brief scene playing one of the victims.