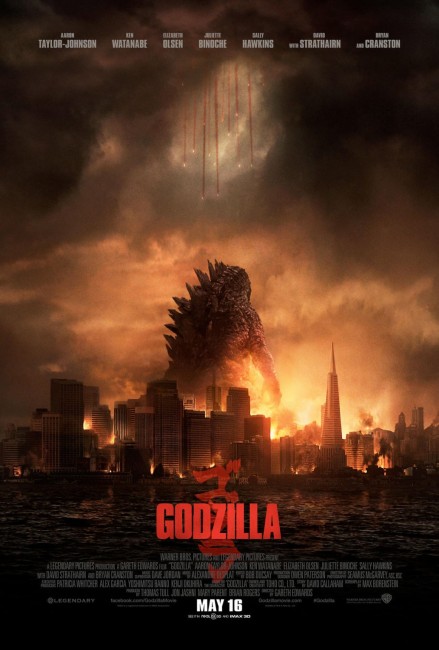 In 1999, scientists fly to The Philippines where miners have uncovered massive prehistoric creatures, which have returned to life. American nuclear physicist Joe Brody is working at the Janjira nuclear power plant in Japan when it comes under attack. His wife Sandra is killed in the rupture of the reactor core. Thirteen years later, Brody’s now grown son Ford is a nuclear armaments specialist with the US Navy. He is called to Japan after his father is arrested. Brody has become a crackpot, obsessed with proving that he can predict that something similar to Janjira is going to happen again. He drags Ford with him as they break into the quarantined Janjira site, only to find that it is not a radioactive hot zone as the Japanese authorities are claiming. Apprehended, they are witness as a chrysalis left at the site in 1999 hatches and a giant creature emerges. The creature, nicknamed a Muto (or Massive Unidentified Terrestrial Organism) by the US military, is a prehistoric creature that feeds on radiation. Another of the Mutos awakens from where it has been kept captive by the US military in the Nevada desert. As the two Muto monsters head to meet up in San Francisco intending to mate, the massive lizard-like creature nicknamed Godzilla appears in the Pacific and sets out to stop the Muto creatures.

This was the second attempt to make an English-language Godzilla film. Godzilla is of course aJapanese creation that originally appeared in Godzilla (1954), released in the US in 1956 as Godzilla, King of the Monsters with added scenes featuring Raymond Burr. Essentially a copy of The Beast from 20,000 Fathoms (1953), Godzilla nailed the atomic monster movie better than any other film of the era. It seemed to bleed with an extraordinary pain on the behalf of the Japanese over Hiroshima and Nagasaki. Its success led to a huge number of sequels – 31 films in all (see below) – and a number of copycat monster movies.

It was not long after that Toho hit on the idea of pitting their monsters against one another – they even managed to obtain the copyright to King Kong and pitted it and Godzilla against one another in King Kong Vs. Godzilla (1962). Soon into the series, Godzilla began to move from rampaging aggressor to a defender of Japan against other monsters. The various sequels of the 1960s tossed up an array of colourful monsters and alien invaders, although into the 1970s the efforts became sillier, pitched down to children and much shabbier in their effects. The series was successfully revived with Godzilla 1985 (1984), which reworked the original and paved the way for the 1990s and 2000s interpretations that gave Godzilla and the other classic monsters a makeover with much superior animatronic and later CGI effects. The 1990s/00s films are much more grounded, although constantly swing between an uncertainty as to whether Godzilla is monster or superhero.

This of course brings us to Godzilla (1998), the much reviled Roland Emmerich attempt to revive Godzilla for English-language audiences. There are even snide jokes made about it by the Japanese in Godzilla: Final Wars (2004). I probably have more favourable things to say about Emmerich’s Godzilla than almost any other reviewer. It was clearly made on the coattails of the success of Jurassic Park (1993) and is informed far too much by that film. IMHO though it serves well as the mass destruction film it was intended to be; just not as anything that stands in the lineage of the Japanese Godzilla films.

The new Godzilla has been placed in the hands of Gareth Edwards, a British director who came from a visual effects background – mostly work for British tv documentaries and specials. What made everybody pay attention to Edwards’ name was his debut film Monsters (2010) about two people passing through a zone that had been taken over by mysterious alien creatures where Edwards evoked an extraordinary sense of alienness. What was remarkable about Monsters was the fact that Edwards shot it on a $14,000 budget – including conducting all the visual effects himself, where he produced exceptional work on a par with that being churned out by the big effects houses. It is clearly this that had Edwards given the director’s chair for Godzilla. Notedly he is working with a budget ten thousand times the size he had on Monsters (and only for his second directorial outing too).

The thing that should be stressed is that Godzilla 2014 is not a sequel, remake of or related to Godzilla 1998 (although, aside from a slightly different origin story, it could easily have worked as a sequel – not a connection one suspects the producers were eager to play up given the public reaction to the Emmerich film). Nor is it necessarily related to any of the Japanese films in terms of continuity – it exists more like Never Say Never Again (1983) does to the canonical James Bond films, more as the same character, slightly different interpretation.

In pre-publicity, Gareth Edwards made the intriguing statement to the effect that he didn’t want to do just another remake of the original a la Godzilla 1998 with Godzilla as rampaging aggressor but something akin to one of the Godzilla vs ____ sequels with Godzilla facing another monster. This is an approach that leaves the film with some problems. In that Godzilla 2014 is essentially a reboot and is thus required to offer up an origin story for its title character, it becomes a conceptually stacked story requiring the introduction of not one but two monsters and then finding reasons to have them trading punches. Edwards’ answer to this is to barely dwell on Godzilla’s origin at all and assume that audiences are already familiar with the title character. This does lead to a puzzling set-up where we barely even get to see anything of Godzilla for the better part of the first hour of running time – even then many of the shots are limited to giant feet, its bulk partially glimpsed between the canyon of buildings or the ridges on its spine seen protruding as it moves through the water. (Indeed, the film’s poster – Godzilla with his back turned – could not be more perfectly chosen). We get a big monster appearance about twenty minutes in as the Muto emerges from its cocoon – but even there Edwards seems to initially be leading our expectations up to the appearance of Godzilla and then subverting them by producing something different. (As everyone seems to be asking, the Muto creatures are not taken from any of the Japanese films and are original to this film, although do incorporate occasional design elements of other creatures).

The problem with the 1998 film was that it worked perfectly well in every way except when you looked upon it as a Japanese Godzilla film. The same could often be said here, although Godzilla 2014 pays its respects far more to the Japanese films. It feels a very different film in many ways. The Japanese Godzilla films without exception regard the human factor as a necessary irrelevance. We get a few stock figures of scientists, psychics or military running around, but mostly the films make a beeline as quickly as possible for what they are interested in – seeing the men in big rubber suits beating the crap out of each other and trashing model sets.

By contrast here, we get much of a standard disaster movie complement of characters – Aaron Taylor-Johnson even gets to run through the middle of the film carrying a lost kid. The complaint you could make about the film is that is assembles a very excellent cast – Bryan Cranston, Juliette Binoche, Sally Hawkins, Elizabeth Olsen, David Strathairn – for roles that don’t need them ie. could be filled by anybody. You could also quibble with the film’s use of the actors – [PLOT SPOILERS] in that, despite the pre-publicity giving the impression that he was the headline name, Bryan Cranston is killed off not long into the film, while Juliette Binoche is killed after only a couple of scenes.

This difference is perhaps most noticeable in the lighting and colour palette the film uses. Cinematographically, none of the Japanese Godzilla films are very complicated – clean, clear set-ups that have rarely varied since the 1950s. Most of the Japanese films have the cameras up around the same height as the monsters watching them brawl. By contrast, Gareth Edwards (and Roland Emmerich too) seems to prefer placing his camera down at street level and looking up taking in the awe-inspiring scale of the monsters. The texture and depth of the effects is impeccable. What comes through most of all is the vastness of scale and degree of devastation wrought by the monsters trampling major urban centres – it is something that Edwards almost makes into a work of art. Some of the shots looking through cities in roiling clouds of smoke lit up with flashes of lightning have an almost painterly beauty to them – you are reminded of some of Joseph Turner’s landscapes.

In this respect, Godzilla 2014 often resembles Gareth Edwards’ Monsters more so than it does any of the Japanese Godzilla films. The most distinctive images to come out of Monsters were the sheer alienness of the creatures that inhabited the film’s borderland zone, of vast inexplicable leviathans striding across the landscape. There are times that Godzilla could almost act as a prequel to Monsters. The area around the Janjira plant is turned into another walled-off borderland zone (although the image that looms over these scenes are echoes of the recent Fukushima disaster). In particular, some of the shots of the Muto emerging from its cocoon, unfolding its insectoid legs and towering overhead, and especially the scene with Aaron Taylor-Johnson on the bridge looking up as the Muto strides overhead could have been transplanted straight from Monsters.

What we don’t get here is much in the way of the two monsters trading punches and the frequently absurd wrestling tactics employed in the Japanese movies – kicking rocks at one another, dropkicks, bodyslams, picking up each other by the tail and swinging them around their heads and so on. The battle between the two creatures takes place on a scale of unimaginable size, is relatively slow moving and more concerned with the mass destruction surrounding the fight – indeed, what we have feels more like Pacific Rim (2013) than a Japanese Godzilla film. Nevertheless, Gareth Edwards does deliver the goods – you feel like cheering the first time when we see Godzilla’s dorsal fins lighting up and he unleashing his radioactive breath, while his final ingenious move in obliterating the Muto has the whole audience applauding.

Godzilla: King of the Monsters (2019) was a sequel that introduced several other Japanese monsters, while Kong: Skull Island (2017) contains reference to MUTOs and post-credits tie-up with various Japanese monsters including Godzilla with the two set to square off in Godzilla vs King Kong (2020).

Gareth Edwards went on to make the Star Wars prequel Rogue One (2016).. He also produced the sequel Monsters: Dark Continent (2014).

(Winner for Best Special Effects at this site’s Best of 2014 Awards).