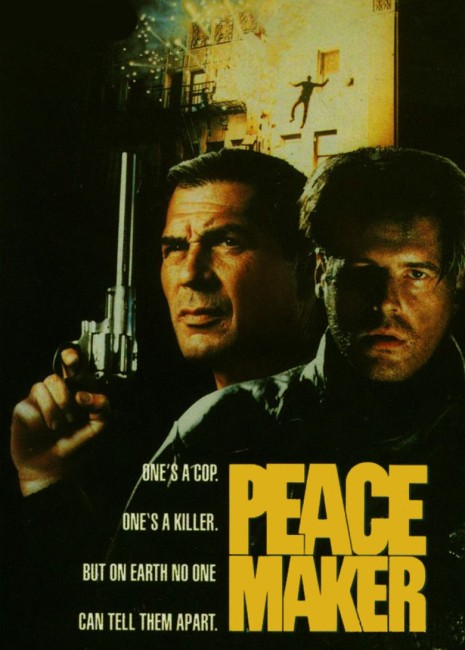 Cops pursue a man after he attempts to steal a shotgun from a police car. It requires a massive amount of artillery fire before the man is shot down. In examining the body afterwards, coroner Dori Caisson is startled to see the dead man’s bullet wounds heal and he then get up off the morgue table unharmed. The man takes Dori prisoner as another near-invincible man pursues in a fierce battle. Her captor, Townsend, explains that he is an alien Peacekeeper in pursuit of the other man, Yates, who is an intergalactic serial killer. Dori is dragged into the midst of the battle between Townsend and Yates as they attempt to eliminate each other in a series of massively scaled shootouts and car chases. She gradually comes to warm to Townsend. She is then captured by Yates, who explains to her that things are not the way they seem and that he has been placed on Earth as part of an intergalactic witness protection program and that Townsend is an assassin come to hunt him down.

Peacemaker is one of the more unassumingly enjoyable films among Kevin S. Tenney’s output. The film was clearly inspired by the success of The Terminator (1984). After The Terminator came out, there were several very similar films all on the theme of alien cops hunting alien criminals – most notably The Hidden (1987), which Peacemaker owes more than a debt of inspiration to, as well as the likes of the tv mini-series Something is Out There (1988), Dark Angel/I Come in Peace (1990), Abraxas: Guardian of the Universe (1991) and The Cat (1992).

In fact, Kevin S. Tenney happily pillages from other science-fiction films right and left – there is the idea taken from Starman (1984) of the woman abducted by an alien and forced to take him on a journey, as he only starts to understand human language; and a scene where an alien escapes by leaving his severed hand still attached to a handcuff that is borrowed directly from Scream and Scream Again (1970).

Kevin S. Tenney whips everything up into an entertaining package. The film is clearly made on a limited budget and looks it too – the alien transformation effects are particularly cheap looking. Nevertheless, Tenney does a decent job of imitating the pelting action style of James Cameron, particularly during the big set-piece of a highway chase sequence. There is the odd moment where Tenney doesn’t seem to realise that he is creating cliché shots – cop cars piling up in slow motion, motorcycles skidding under semi-trailers, people going through windows in slow motion – but generally the film works successfully in the action department.

Where the film works particularly well is in the ambiguity that Tenney sets up between the two aliens as to which is the good guy and which the bad guy. Both aliens offer equally plausible alternate scenarios about one being a serial killer and the other an intergalactic law enforcement official, or one being a ruthless assassin and the other relocated to Earth as part of an intergalactic witness protection program. The film hovers between both scenarios, even offering some intriguing explanations that make for good science-fiction about Robert Forster having passed through a black hole during their pursuit in order to explain how he has been on Earth for twenty years.

The script throws in some wry one-liners – heroine Hilary Shepard reacts in disbelief at Lance Edwards’ claim that he is an alien: “This is Candid Camera! Tell me you’re Allen Funt” and later pinpoints his dilemma: “You’re telling me you can’t go home because you’ve lost your [spaceship] car keys?” In one hilarious scene, she tells off a cop: “The only difference between a brownnose and a shithead is depth perception.”

On the minus side, the toplined Robert Forster seems miscast – Forster’s dour, phlegmatic persona is too mellow for the part of an alien bad guy. On the other hand, Lance Edwards has a blank impassiveness that works well for the character of an alien. The result makes for a film that falls just between being a B-budget ripoff and between offering a clever and imaginative treatment of clichés that stands it out over the other Terminator copies.