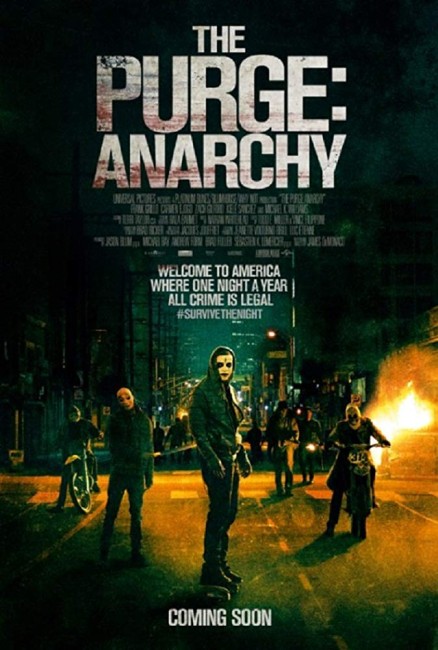 The year 2023. It is the annual Purge where all crime is legal for one night. Shane and Liz are heading home when their car breaks down and they are stranded out in the open just as the hour of the Purge begins. They have been shadowed by a gang who immediately start hunting them. Elsewhere, Eva and her daughter Cali find that Eva’s father has offered himself to the rich to hunt in return for a $100,000 endowment. Gangs then breaks into the apartment and drag Eva and Cali away. Meanwhile, Sergeant has gone out into the streets seeking vengeance. He happens by and intervenes to save Eva and Cali at the same time as Shane and Liz take refuge in his car. After his vehicle is shot up by the gang, he agrees to escort them to safety at Eva’s sister’s place in return for another car. However, they are hunted and targeted the entire way by the gang who have made eliminating them a personal matter.

I found The Purge (2013) to be an unremarkable film. It had a novel idea – a future society where all crime becomes legal for one night and how this, for reasons that are never made clear, has somehow managed to cut down on crime. Mostly the film served as a warmed-over Straw Dogs (1971) scenario where Ethan Hawke and his family were forced to shelter a homeless man inside their home from the lawless forces outside. The Purge didn’t receive many particularly good reviews but it was evidently a sufficient hit that director/writer James DeMonaco, along with high-profile producers Michael Bay and Jason Blum, have returned with this sequel.

I found the social premise of The Purge‘s future a fundamentally implausible one. What sane law making body would conceivably vote in a system that legalises every type of crime for one night? James DeMonaco peppered it up with some interesting digs at Occupy Era politics in having the 1% in their gated communities being at bay from the forces outside – yet at seemingly contradictory remove, he also seemed to be arguing in favour of the need for a highly militarised home defence system from said forces beyond the door.

I raised a number of questions about how the society would work. With The Purge: Anarchy, you get the impression that DeMonaco has set out to answer some of these. For one, the scenario is expanded out beyond gated communities and we see a variety of different people as they try to cope with things, including a family down the working class end of the spectrum.

Here the premise has gone from what was warmed-over Straw Dogs to something like the equivalent of The Warriors (1979), the cult classic about a group of youths having to travel through hostile gang territory over the space of a night, which one feels is a far more promising treatment of the basic idea than we had in the first film. James DeMonaco expands it out to show various of the other crazies rampaging through the streets.

Disappointingly, there is not a huge amount more we see in the variety of crimes being conducted than the people in masks killing others we had in the first film. For instance, in major disasters like the L.A. Riots or the aftermath of Hurricane Katrina, the sudden absence of law and order didn’t amount to rampant murder so much as it did crimes of economic opportunity ie. looting, of which we see nothing in The Purge films so far.

James DeMonaco expands out on his political diatribe that we had in the first film. We get a great many digs at how the system has set this up to eliminate the surplus unemployed and it seen that the government is covertly backing secret militias to eliminate the poor. The wealthy are seen placing on private Purges as spectacle for their own amusement, paying and then capturing people to be hunted. There is the character of a revolutionary who begins an armed revolt against the elites – although in terms of their ideals the revolutionaries come with no more depth than a bunch of protest placard sentiments and are essentially written as the equivalent of the Seventh Cavalry in a Western who conveniently burst in to save the cornered party. (One also has serious reservations about a group whose reaction to a society where people are allowed to kill one another is to burst in with even more artillery).

As with the first film, this is not particularly a work that is offering up politics of any depth – and where most of this is overridden by a loud and insistent barrage of gunplay anyway.