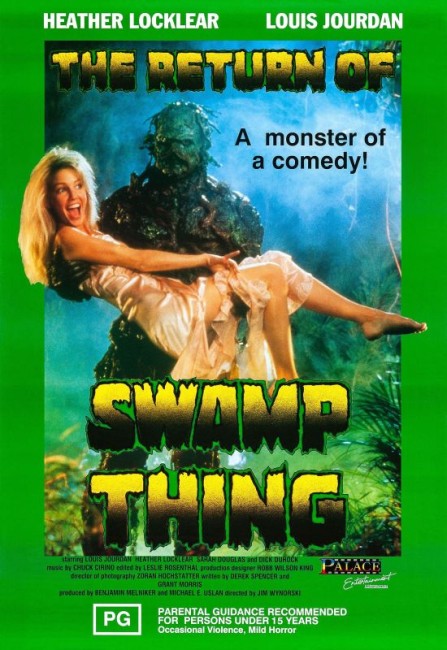 Arcane’s stepdaughter Abigail travels to visit her father at his swamp estate for the first time in several years. Arcane sees this as an opportunity, needing her DNA and that of Swamp Thing to reverse the accelerated aging effects he is experiencing as a result of his experiments gone wrong. When Abigail finds the ruthless things her stepfather is up to, she flees. She is aided in her flight by Swamp Thing. In the swamps, the two of them fall in love.

The Return of Swamp Thing is a sequel to Wes Craven’s Swamp Thing (1982). Swamp Thing was not much of a hit and was lambasted by both Wes Craven fans and fans of the DC comic-book for its lack of fidelity to the original’s dark Gothic mood. Nevertheless, producers Benjamin Melniker and Michael E. Uslan, who also held the rights to the Batman film series around the same time, persisted and went onto make this sequel.

However, rather than take the opportunity to try and improve on the first film and take it closer to the source, Melniker and Uslan contrarily pushed The Return of Swamp Thing further in the directions that every person hated about the original. The sequel is made even campier to emerge as something akin to the Batman (1966-8) tv series – the film was even billed as “a monster of a comedy.” It is this misunderstanding of the material that makes one glad that Melniker and Uslan were not any more closely creatively involved (excepting as Executive Producers) in the making of the finished Batman (1989) film.

As director, Melniker and Uslan employ Jim Wynorksi, a prolific B-budget genre hack responsible for numerous films, most of which betray a campy and unserious attitude toward the material. (See bottom of page for Jim Wynorski’s other films). Wes Craven’s Swamp Thing, even if it failed to treat the source material with the greatest respect, at least took it reasonably seriously. Jim Wynorski, by comparison, does not. Heather Locklear gets an opening line: “Good morning, sorry I’m late. I just got back from my transcendental therapy group in Malibu. I can’t believe they wouldn’t validate.” Upon departing for the swamplands, she leaves her assistant instructions: “Read to them [the plants], especially the sports section. They’ve got a thing for The Lakers.” The romance between her and Swamp Thing is the film’s height of silliness: “I’m a plant,” he says. “That’s okay,” she responds, “I’m a vegetarian.”

The film is cheaply and cartoonishly made. Jim Wynorski had a witless sense of humour – a scar-comparing romance between two guards played by Ace Mask and Wynorski’s girlfriend Monique Gabrielle is asinine. Further the film tends to show up the limitations of Louis Jourdan as an actor. Louis Jourdan is wrong for the part of Arcane – he plays it too soft, he seems more of a French seducer than a comic-book villain. The part should have been played akin to something like Paul Freeman’s Belloq in Raiders of the Lost Ark (1981).

The Swamp Thing franchise continued with two tv series:– the abysmal Swamp Thing (1990) and the animated Swamp Thing (1991). The character was subsequently revived in the tv series Swamp Thing (2019), which works the best of all the incarnations in adhering to the mood and canon of the comic-book, although this was cancelled after ten episodes. Swamp Thing also makes an appearance in the animated Justice League Dark (2017).