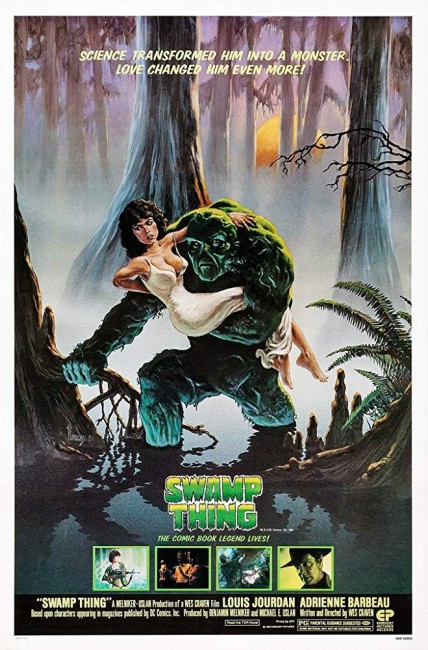 Biochemist Alec Holland develops a formula that can regenerate organic matter. However, a fight ensues when his rival Arcane burst into his laboratory to steal it. During the fight, Holland is set on fire and dives into the swamp, covered with the formula. There the formula and the swamp waters combine to transform Holland into an entirely new creature.

Len Wein and Berni Wrightson’s Swamp Thing comic-book, which originally appeared in 1972, became a cult classic among comic fans with its dark, moody Gothic style and the conceptual daring of ideas that Wrightson and other writers (including Alan Moore and horror novelist Nancy Collins) incorporated.

The very novelty of its central character made it seem a promising film adaptation. Moreover, Swamp Thing was taken on by Wes Craven who by the early 1980s had emerged as a director of two brutalizing shock effect films, The Last House on the Left (1972) and The Hills Have Eyes (1977), and was starting to move towards mainstream acceptance. Ahead for Craven would be films like A Nightmare on Elm Street (1984) and Scream (1996). (See bottom of the page for a list of Wes Craven’s other films).

Unfortunately, the promise that both the Wes Craven name and the cult comic book offered was one that is quickly dispelled by the film itself. It is not just surface changes like turning the agent Cable from a male to a female in order to provide a love interest, or turning Arcane from an aging magician into a mad scientist but far more than that. Gone is the dark moodiness of the comic-book and instead the film is little more than a live-action cartoon set in the swamps. (Although, this is a model of restraint compared to the campy sequel).

The Swamp Thing costume is poorly fitting. Agreedly, this suits the film’s cartoonish level, but it seems hard to believe that the creature with its ridiculously chiselled pert nose and jutting cheekbones is the same character as the scientist played by Ray Wise at the start of the film.

The plot consists of much running back and forth in the swamp and a series of tedious repetitions on Cable nearly being captured by Arcane and men, rescued by Swamp Thing and then captured again. The unexciting action sequences consist almost entirely of people being thrown through the air in slow motion. Louis Jourdan gives an awfully stilted and campy performance as Arcane. On the film’s plus side is Adrienne Barbeau whose tough and two-fisted heroine is certainly welcome.

Swamp Thing was clearly produced to jump aboard the sudden rush of screen comic-book properties in the early 1980s after the success of the Christopher Reeve Superman (1978). Producers Benjamin Melniker and Michael E. Uslan also held the rights to the Batman comic-strip around the same time. You cannot help but think if Swamp Thing had gone ahead in the hindsight of the Tim Burton Batman (1989) and adhered to the same dark brooding mood of both the Burton film and the original Swamp Thing comic-strip, this could have been a minor masterpiece. Played as the silly cartoon it is, it is a lost opportunity. Swamp Thing is one of the worst films made by the usually reliable Wes Craven.

There was a sequel with the dreadful campy The Return of Swamp Thing (1989), which features return performances from Louis Jourdan and Dick Durock. There were also two tv series:– Swamp Thing (1990), which is surely one of the greatest wastes of time ever committed to video, and the animated Swamp Thing (1991), a routine variation that turns Swamp Thing into a cartoon superhero. The character was subsequently revived in the tv series Swamp Thing (2019), which works the best of all the incarnations in adhering to the mood and canon of the comic-book, although this was cancelled after ten episodes. Swamp Thing also makes appearances in the animated films Batman and Harley Quinn (2017), Justice League Dark (2017) and Justice League Dark: Apokolips War (2020).