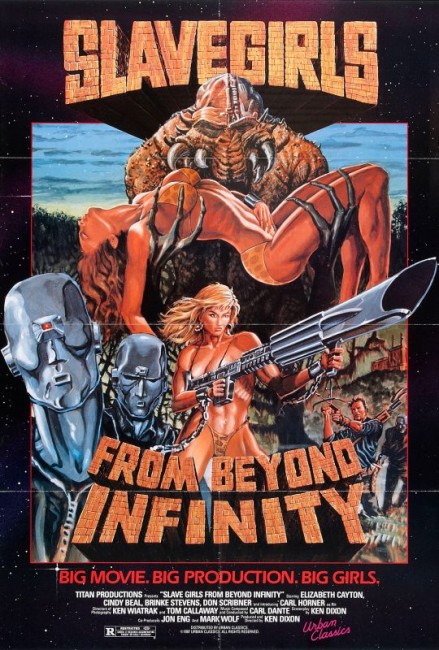 Sisters Daria and Tisa make an escape from an intergalactic slave ship by stealing a shuttle. Something then draws the shuttle down to crash on a planetoid. There they are welcomed by Zed and his two guests, a brother and sister who are survivors of another crash. As they enjoy Zed’s hospitality, the two sisters discover his trophy room filled with mounted human heads. They realize that Zed has deliberately drawn them here, that his pleasure is in hunting humans for sport and that he now intends to make them his prey.

Most reviewers were happy to dismiss Slave Girls from Beyond Infinity without looking beyond its deliberately bad tongue-in-cheek title and its evident low-budget. Slave Girls from Beyond Infinity is not ‘bad bad’, nor ‘entertainingly wretched’ or ‘deliberately tongue-in-cheek bad’ either, it seems to hover in a middle ground between. It was caught at the start of the late 1980s/early 1990s mini-genre of tongue-in-cheek Deliberately Bad Films and contains many of the elements that became part of that type of film’s formula – the cod-B movie title, a plethora of cheap mutants and robots created by John Buechler’s ubiquitous Mechanical and Makeup Industries, the presence of at least one of the self-styled, minimally talented Scream Queens (here Brinke Stevens and the Elizabeth Cayton, who later started billing herself as Elizabeth Kaitan).

Slave Girls from Beyond Infinity takes itself mildly tongue-in-cheek – the girls for no apparent reason pilot spaceships in bikinis and run around the jungle in their lingerie, the guns are hilariously oversized. The dialogue strains for a profundity that one is unsure is intentional or not. The girls, reflecting upon the death of Brinke Stevens, note “Fate certainly weaves a twisted tapestry,” and console themselves with repartee such as “He’s history now,” “History has a way or repeating itself.” Such dialogue comes all the more amusing for being planted in such cheap surroundings and being delivered by a cast of next-to-no talent. By the end, the dialogue starts to succeed at its own Edward D. Wood Jr-esque pretensions as the girls sail off in the launch: “What’ll we do now?” “Our universe is vast. Full of wonders … We’ll explore it. Together. Find strange new worlds.”

The script is a rewrite of the oft-rehashed short story The Most Dangerous Game (1924) about a man forced to survive with his bare hands as he is hunted by an aristocratic count. The film is surprisingly faithful to the original film version of the story The Most Dangerous Game (1932). Count Zaroff is reduced to the first letter of his name and known only as Zed; instead of hounds, he has two robots; instead of a reef as trap to make ships crash, the planet has a navigational beacon that draws passing spaceships in; and instead of plying the piano, this Zaroff plays a holographic theremin.

Slave Girls from Beyond Infinity is by no means as bad a film as many reviews make it out to be. If a film can be measured by what it sets out to do and whether it succeeds, Slave Girls from Beyond Infinity is modestly successful. Director Ken Dixon allows the action to chug along competently. The scenes involving the two lead actresses could have been edited with more zip – their lines fall flat, they need something to animate them more.

The major complaint is the shortness of the film – whereas most other film versions of The Most Dangerous Game draw it out into a suspenseful climactic set-piece, the hunt here is over in a matter of minutes. Slave Girls from Beyond Infinity needed to have more of a struggle and contain more suspense. If the same film had been made as an action film on a studio budget it could have worked rather well.