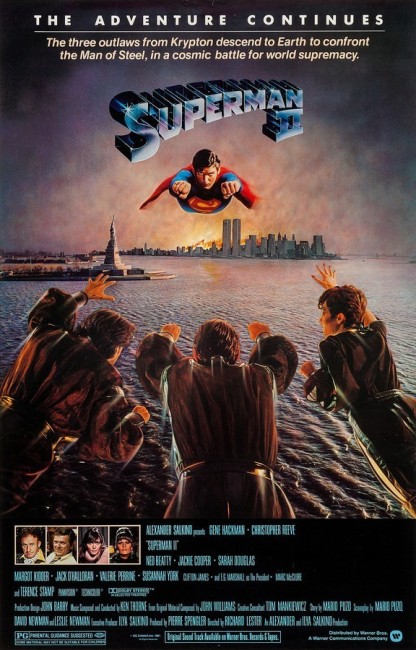 Superman throws into orbit an about-to-explode atomic bomb that has been placed in the Eiffel Tower by terrorists. This unwittingly sets free General Zod, Ursa and Non, the three Kryptonian villains that were imprisoned in the Phantom Zone by his father. Finding that they now have super-powers, the three Phantom Zone criminals come to Earth where they proceed to bring the combined might of America to its knees. Meanwhile, Clark Kent and Lois Lane have been assigned to go to Niagara Falls posing as a honeymoon couple to investigate a fraud scheme. There Lois inadvertently discovers that Clark is Superman. The two realize their love for one another but in order to consummate it, Superman must make the choice to sacrifice his super-powers. However, doing so leaves him unable to stand up against the Phantom Zone villains.

Superman II is not a sequel in the sense that a sequel is usually made to cash in after the success of its predecessor. Rather, in what was a unique idea for its day, it is a sequel that was planned from the outset before the first film premiered. Producers Alexander and Ilya Salkind had had great success with their The Three Musketeers (1973), which was incidentally directed by Superman II‘s director Richard Lester. With The Three Musketeers, they had originally planned to only make one film but Richard Lester had shot so much footage that the Salkinds ingeniously decided to cut it in two and release two films, calling the other The Four Musketeers (1974). When they came to the making of Superman (1978), the Salkinds set out intentionally to shoot two films at the same time.

Alas, things never worked out like that. Superman 1 proved to be an enormously problem-laden production where the shooting schedule overran and there were considerable tensions between the Salkinds and director Richard Donner. The Salkinds brought Richard Lester in in an uncredited associate producer capacity to keep an eye on Donner during the shooting and it was Lester’s idea that shooting of Superman II be adjourned in order to concentrate on the completion of Superman 1 for its Christmas 1978 worldwide release date. At the point this decision was made, approximately two-thirds of Superman II had been shot (accounts of the percentage vary) and production was shut down and recommenced in the latter half of 1979.

Unfortunately, between the release of Superman 1 and the recommencement of Superman II, problems escalated. Marlon Brando (who had received a record $3.5 million plus percentages salary deal for Superman) filed a $50 million lawsuit against the Salkinds even before the film had opened, charging that they had failed to pay him for profits from the film. As the case dragged out in the L.A. courts, it was decided to eliminate all of the scenes that Brando had completed to be used Superman II. These were later reshot using Susannah York who had played Superman’s mother in the first film. In a controversial move, the Salkinds fired Richard Donner early in 1979 (Donner had been vocal in the press about his dislike of the Salkinds’ producing methods – one of his complaints had been the Salkinds’ wanting to make the film more campy in tone) and replaced him with Richard Lester. Citing sympathy with Donner’s removal, Gene Hackman declined to return or be further involved in Superman II and the scenes he was in were either reduced or reshot using a double. [Margot Kidder had also been vocal about Richard Donner’s firing and as a result was almost completely written out of the subsequent sequel Superman III (1983)]. To further add to complications, production designer John Barry, cinematographer Geoffrey Unsworth and special effects man Les Bowie had also died in the interim.

One of the things that the Salkind’s wanted and that Richard Lester complied with was taking the Superman series in a clearly more comic direction than the first film. (This would reach a nadir in their subsequent entry Superman III, which is arguably the worst film of the series). Upon coming aboard Superman II, Richard Lester demanded a script rewrite, which was conducted by David and Leslie Newman who eliminated much of Richard Donner’s attempt to craft the comic-book legend as an American myth. As a result, many aspects of continuity that would have existed between the two films have been eliminated – in the original, it is the missile that Lex Luthor targets on California and Superman throws into space that releases the Phantom Zone villains; Lester cut that and inserts a new sequence about Superman throwing an atomic bomb planted in the Eiffel Tower by terrorists into space. In the original, Superman loses his powers because he transgresses Kryptonian moral laws that bind him as a superbeing; here he willingly sacrifices them for love’s sake. There are also changes in the way that Lois Lane discovers that Superman and Clark Kent are one and the same.

As far as one is able to ascertain, the parts of Superman II that remain from the Richard Donner version are all the scenes with Gene Hackman’s Luthor, the fight in the diner and the climactic scenes in the Fortress of Solitude. Those that are specifically Richard Lester’s consist of the central super-powered fight in the streets of Metropolis, the Eiffel Tower scenes, all the scenes with Susannah York as Superman’s mother, the scenes between Lois Lane and Superman in Niagara Falls and the love scenes at the Fortress. Many other scenes are hybrids made up of material shot by both directors. Debates about how much of the final film is Richard Donner’s and how much Richard Lester’s vary from anything between 60% to only 10%, largely dependant on whose camp the teller supports. (To further add to the confusion, network tv broadcasts of Superman II in the late 1980s contained extra material from the Richard Donner version that had not been seen in the original theatrical release). Despite all of that, the film holds up remarkably well. The seams are rarely visible, with there being only minor noticeable aspects such as Margot Kidder’s changing hairstyle.

Without the need to set-up the myth that the first film was necessarily engaged in, the story here is far more dramatically contained and less episodic. This film certainly misses Superman I‘s mythic lyricism and humanity but instead is more of a delight in the way that the comic-book was. The highlight of Superman II is the marvellous mid-air barroom brawl over Metropolis with Superman and the super-villains throwing buses at one another, punching each other through buildings and demolishing the city. On the minus side, Richard Lester certainly likes his slapstick. Superman II never treads the depths that Lester did in Superman III, but one can see the beginnings of it – ramps placed so that Jeeps can crash through billboards, ice cream cones knocked into people’s faces, a man being blown along a street in a phone box. On the plus side, the scenes involving Lex Luthor’s buffoonish assistants have thankfully been minimized.

One of the aspects that makes Superman II shine is the villainy. Terence Stamp, who had been a youth star in the late 1960s but had fallen into a career slump by this point, plays with commanding presence. This is a role that Terence Stamp carries off with the pure power of his voice alone and the film would be considerably less than it is without him. The show is also stolen in large part by Sarah Douglas who struts through like something out of a masochist’s wet dream in a wonderfully cold and haughty performance that holds the screen almost as well as Terence Stamp does. Sarah Douglas was immediately after offered a part in tv’s primetime soap Falcon Crest (1981-90) and went onto play a number of similarly cold villainess parts in B movies, but never did anything as great as her role here again. The third Phantom Zone villain, Jack O’Halloran’s Non, is played strictly for laughs.

The most intriguing thing that Superman II does is resolve the Superman-Lois-Clark love triangle. This was always left perpetually hanging in the comic-books (at least until the 1986 DC Post-Crisis reshuffle of the characters) – it was always Lois’s curiosity and elaborately contrived ploys to prove that Superman and Clark Kent were one and the same that drove the triangle. However, the film solves this in one foul swoop. The scriptwriters have clearly read Larry Niven’s hilarious short-story Man of Steel, Women of Kleenex (1971), which speculates about the problems of Superman’s sex life – either that or they are resorting to the mythic aspect of a hero sacrificing his powers for the sake of love. In its favour, Superman II resolves this with genteel affect. Despite the haphazard nature of the shooting, both Christopher Reeve and Margot Kidder manage to give even more finely shaded performances than they did the first time around. The main problem with the romance is that having made such a sweeping change in the characters and resolved the sexual tension, the film cops out and restores the status quo with the lamest ending imaginable – Superman giving Lois a magic amnesia-inducing kiss. It is an incredibly feeble way out of such a plotting cul-de-sac.

The legacy of the numerous rewrites is also that Superman II ends up with an enormous number of plot holes. After having established that Superman must permanently sacrifice his powers to consummate his relationship with Lois Lane, for example, the film manages to inexplicably have him somehow just get them back. Important plot devices hinge on conveniently reversible power-draining crystals, which are naturally set up with complete foreknowledge. One tends to feel that a story should either have the courage of the areas it ventures into – resolving the love triangle, Superman sacrificing his powers altogether – or not raise them at all but to raise them and then run away from dealing with them is conceptual cowardice.

Richard Lester began as a director in British comedy and first made his name with The Beatles’ A Hard Day’s Night (1964) and subsequently directed a number of British comedies such as The Knack (1965), A Funny Thing Happened On the Way to the Forum (1967) and Petulia (1968). Richard Lester’s other genre outings were the comic space journey Mouse on the Moon (1963), the Beatles fantasy Help! (1965), the surrealist WWII black comedy How I Won the War (1967) and the post-holocaust black comedy The Bed Sitting Room (1969).

The subsequent Superman films were Superman III (1983) and Superman IV: The Quest for Peace (1987), the latter made after the Salkinds sold the property due to the flop of Superman III. The Salkinds also made Supergirl (1984) and the tv series Superboy (1988-90). After much wangling about a revival in the 1990s, Superman was revived in Superman Returns (2006), which directly carries on from Superman II in continuity.