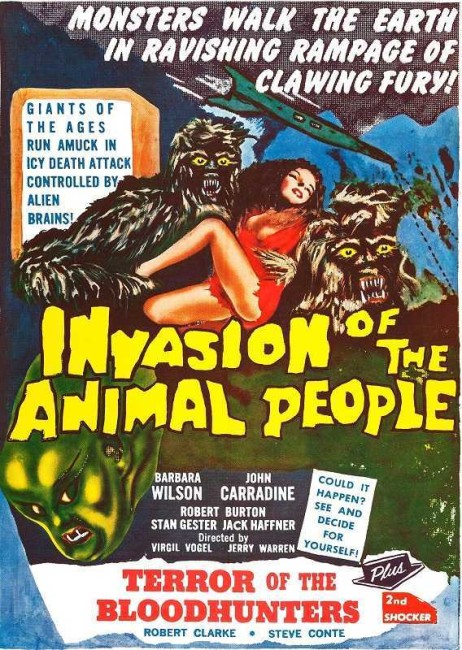 aka Invasion of the Animal People; Space Invasion from Lapland

Frederick Wilson, an American at the Royal Academy of Science in Stockholm, joins an expedition to investigate a meteorite that has landed in the snowy wastes of Lapland. Also joining the expedition is Swedish geologist Erik Engstrom who becomes attracted to Wilson’s niece Diane, an Olympic skater. Diane defies orders to stay behind and sneaks aboard the plane as they depart for the impact site on a remote mountainside. There they discover that the meteorite is actually an alien ship and that the crash has unleashed a giant monster.

Terror in the Midnight Sun was filmed in Sweden as part of a American-Swedish co-production deal. There is some confusion because the film floats around under different titles. The original version, variously known as Terror in the Midnight Sun and Space Invasion from Lapland, runs to 69 minutes. Producer/director Jerry Warren obtained the copyright on this, cut some twenty minutes of footage and shot extra scenes with narration by John Carradine. This version was released in 1962 as Invasion of the Animal People and runs to 55 minutes. Many of the scenes from the original version were restored for subsequent tv airing.

I haven’t seen the Jerry Warren version but Terror in the Midnight Sun is an incredibly dreary and dull film. It is supposedly about an alien craft landing in Lapland (the northernmost area of Finland that borders Sweden and Russia) and a monster emerging. That said, most of the film consists of the crew trekking through the snowy wilderness. There’s a scene of the meteor coming in and rolling down the mountainside at the start, a single scene where the crew investigate the crash site and a few minutes of the monster rampaging at the end. The rest is just incredibly dully directed scenes of the crew in the snow and not a whole lot else. It is possibly the dreariest alien invasion film made in the entire 1950s period.

Indeed, one of the few points the film actually comes to life is the early scenes with Stan Gester on the ski slopes as Barbara Wilson runs a series of flirtatious rings around him. Although one of the more eye-opening parts comes when the expedition departs and how at every leg of the journey she is constantly told things like “Oh no, you’re not going … Stay here and look pretty,” which ring with a fairly atrocious sexism today.

In the last ten minutes, the monster does turn up, looking like a giant shaggy Yeti. It seems to vary wildly in size – in some scenes it is towering over the hut and village and there are cutaway shots to people looking upwards where it would seem to be at least 40-50 feet tall. In other scenes, where it is carrying an abducted Barbara Wilson in its arms, it looks only about twelve feet tall tops.