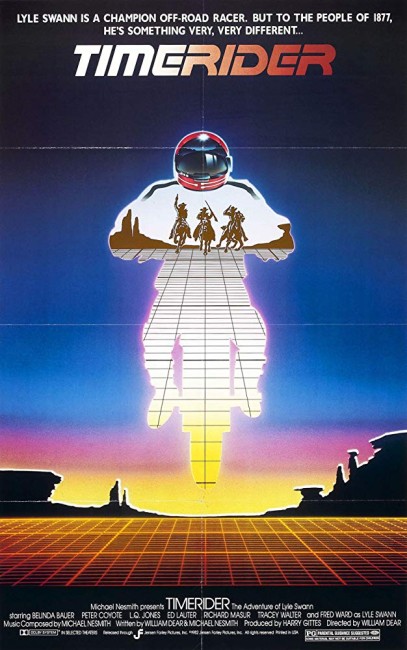 While out tracing a new course route, motocross racer Lyle Swann inadvertently strays into a test area just as Project Timerider is activated. He and his motorcycle are thrown back in time to 1877. There Swann finds love with the independent-minded Claire Cygne. His motorcycle is then stolen by the outlaw Porter Reese who uses it to conduct a crime spree.

Timerider: The Adventure of Lyle Swann was the second film of William Dear, a director who has kicked around the edges of the genre for a number of years without achieving any notable success – directing the likes of the James Bond spoof If Looks Could Kill/Teen Agent (1991), the remake of Angels in the Outfield (1994), various episodes of Amazing Stories, Journey to the Center of the Earth (1993), a silly tv pilot that tried to rework Jules Verne as Star Trek: The Next Generation, the horror film Simon Says (2006) and the baseball fantasy The Sandlot: Heading Home (2007). At what might be called the height of his success, Dear directed the likeable Bigfoot film Harry and the Hendersons/Bigfoot and the Hendersons (1987) for Spielberg.

Timerider: The Adventure of Lyle Swann is a slight time travel affair. It is not particularly great or even what one might call good but it has a certain amiability. Its temporal blending of a motocross rider and cowboys never emerges as anything conceptually inventive. Instead, the film plods through a series of variations on the usual cliches of the Western – the heroine abducted by the outlaws, the US Marshals on the trail, shootouts, the hard-bitten lawman seeking vengeance and so on. However, the film has some occasionally amusing moments, like the scene around the campfire where Fred Ward casually produces his helmet with infra-red targeting and starts talking about hi-tech Silicon Valley bikes oblivious to everyone’s utter amazement.

What Timerider needed was to have been made a couple of years later, after the success of Back to the Future (1985). Back to the Future essentially gave science-fiction cinema an ability to range through time with casual ease and, most of all, showed how to treat temporal culture clashes with a sense of humour. What Timerider needs is more of a sense of humour in its culture clashes. Certainly, the dramatics, particularly the lengthily padded scenes of Fred Ward’s bike buzzing through the desert at the start, are not enough to carry the film on their own.

The film’s one novelty is that it is surely the first time travel film in which the time traveller does not realise throughout, until the voiceover that ends the film in the last minute, that he is in another era. (Surprisingly, the film fails to play this for any humour either). The twist ending, wherein the heroine is revealed to be the hero’s grandmother, although another a huge cliche, does has a modest cleverness.

The cast are variable. Fred Ward, prior to becoming a bigger name actor, plays flatly. Worse is Peter Coyote who turns the villain into a broad caricature. Belinda Bauer is better but her character has no conviction, being construed wholly as a modern woman – one scene where she forces Fred Ward into bed at gunpoint is preposterous.