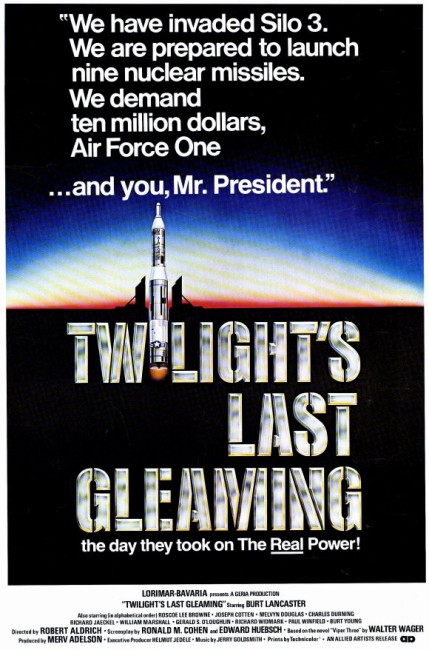 1981. Former US general Lawrence Dell has escaped from prison where he had been arraigned by the military on a trumped-up murder charge. He leads a group to seize a nuclear missile silo in Montana. Armed with the launch codes, Dell threatens to fire nine Titan missiles. Contacted by the President, he demands Air Force One and $10 million. Most importantly however, Dell demands the release of the contents of a security file that will reveal the US’s real reasons for entering the Vietnam War – that America knew they had no hope of defeating the enemy but sacrificed thousands of soldiers to prove they could stand up to the Soviet Union, conducting the whole war as what was essentially a public relations exercise.

Twilight’s Last Gleaming came out ten years too early for the big cinematic Vietnam guilt excoriation cycle that came about after Oliver Stone’s Platoon (1986). There is something about the film that is determined to make a big bold statement about the Vietnam War – by contrast, in Walter Wager’s original 1972 novel, the general was merely trying to clear his name after being convicted for a murder, but the film has added an entire new plot (and a new title) about wanting the truth about Vietnam brought out.

Seen in the retrospective light of the outpouring of anger, betrayal and resentment that Oliver Stone and successors untapped, Twilight’s Last Gleaming seems rather of a potboiler in a teacup about not much at all. The big moral indignation that the film gets worked up about about the Vietnam War being conducted as public relations exercise has been revealed to be rather close to the truth of the situation by the real media anyway, but with considerably less real world outrage and public outcry than the film predicts.

These accusations certainly drew controversy at the time the film came out – all references to the Vietnam War were cut out in some prints, which are missing up to twenty-four minutes of the film. If nothing else, Twilight’s Last Gleaming makes comparison to other films on the subject of nuclear hijacking/terrorism – see the likes of Goldfinger (1964), Thunderball (1965), The Fourth Protocol (1987), Broken Arrow (1995) and Warhead (1996) – which are noticeable in their lack of political subtext. The film makes interesting contrast to Seven Days in May (1964) in which Burt Lancaster plays another rogue general who attempts to conduct a coup to overthrow the President.

The film is only a so-so thriller. It was directed by Robert Aldrich who had come to some distinction with the classic film noir Kiss Me Deadly (1955), war films such as The Dirty Dozen (1967) and The Longest Yard (1974) and of course the Grand Guignol psycho-thrillers What Ever Happened to Baby Jane? (1962) and Hush … Hush, Sweet Charlotte (1964).

By the late 1970s and up until his death in 1983 however, Aldrich seemed like a spent force and kept only turning out duds like The Choirboys (1977) and The Frisco Kid (1979). Aldrich stages some effective suspense with the use of split-screen editing during the various attempts to break-in to the silo but on the whole this emerges as a disappointingly pedestrian film.

Charles Durning is far too shallow an actor to convince as the next-to-saintly President and a gruff Richard Widmark, scrunched up into his ill-fitting uniform, is saddled with some awful lines: “Are you trying to tell me a renegade general has his hands on a Titan missile?” “No sir, that button can launch nine Titan missiles.”