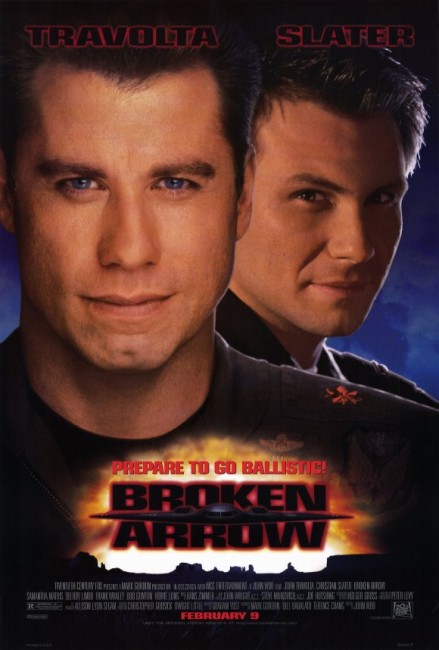 Air Force pilots Major Vic Deakins and Captain Riley Hale take a Stealth bomber up on a routine test flight. Unexpectedly, Deakins then knocks Hale out and ejects the two nuclear weapons that are on board. Hale manages to bail out before Deakins crashes the plane. Deakins is working for a group of organised criminals who want to steal the nuclear weapons. He fakes a call to base, saying that the weapons’ cores are exposed, making the area around the crash site radioactive, allowing them freedom to smuggle the warheads out. Hale joins forces with park ranger Terry Carmichael and sets out to stop Deakins as he makes plans to detonate one of the weapons in a civilised area unless they are paid a ransom.

Director John Woo became a cult figure in his native Hong Kong with crime thrillers like A Better Tomorrow (1986), The Killer (1989), Once a Thief (1990) and Hard-Boiled (1992). What made John Woo such a refreshing talent over any Hollywood action director was his extraordinarily kinetic, pyrotechnic action style, something that has been endlessly copied by Western filmmakers since. Unlike most of his Hollywood contemporaries, who seem determined to keep heaping size upon size, adding bigger and bigger explosions and more spectacular stunts, Woo gets in with an amazingly gritty kinesis and creates a pure ballet of slow-motion violence. Woo’s discovery in the West in the 1990s proved an opportunity for him to leave Hong Kong before the 1997 handover to China and he spent the next decade working in the US mainstream.

John Woo’s first Hollywood film, Hard Target (1993) with Jean-Claude Van Damme, showed signs of mainstream compromise and, while critically trashed, was still a worthwhile film in the patented Woo style. Unfortunately, the same cannot be said for Broken Arrow, Woo’s second Hollywood film. It appears that here Woo has been given the same mega-size budget that the likes of James Cameron, Renny Harlin, Stephen Sommers et al regularly command – whereupon he promptly uses it to make the same sort of mindless action spectacle that is exactly what his Hong Kongese films weren’t.

Broken Arrow is undeniably spectacular – there are amazing death-defying train and vehicle chases, wild fights and shootouts. Woo seems to have included a helicopter crash every few minutes. However, the constant spectacular insistence of it all becomes wearying. Unfortunately, Woo’s style has disappeared under the size of the production. There are occasional moments where patented Woo-isms pop up – one being the initial encounter between Christian Slater and Samantha Mathis, which involves a Mexican stand-off using a gun and a knife, but the feeling here is more like the patented Woo-isms have slipped into self-parody.

Broken Arrow also stars John Travolta. At the time, John Travolta was riding in the midst of one of the rare opportunities of the acting profession – a second lease of stardom, granted to him after the smash acclaim of Pulp Fiction (1994). Pulp Fiction allowed Travolta to forever shuck teenybop roles and instead typecast him as a chic intellectual gangster. It also allowed Travolta the opportunity to prove he really could act. Alas, his villainy here is played with a series of mannerisms that have a theatrical obviousness that verge on the campy. Travolta is all posturing psychotic villainy ready to explode at hair-trigger notice. The silliness of his performance is somewhat eclipsed by Jack Thompson’s brief but truly horrendous turn as a stars’n’striper general.

Broken Arrow features a script from Graham Yost who previously wrote the ‘runaway’ hit Speed (1994) and would go onto write Hard Rain (1998), Mission to Mars (2000) and write/produce the From the Earth to the Moon (1997) tv series about the Apollo space program. Broken Arrow is not as brainless a film as Speed was – it never escalates to the level of Speed‘s ridiculously impossible happenings. It does feature what appears to be a central facet of Graham Yost’s work – the male and female leads who are thrown together in the midst of action and survive utterly improbable odds to the end.