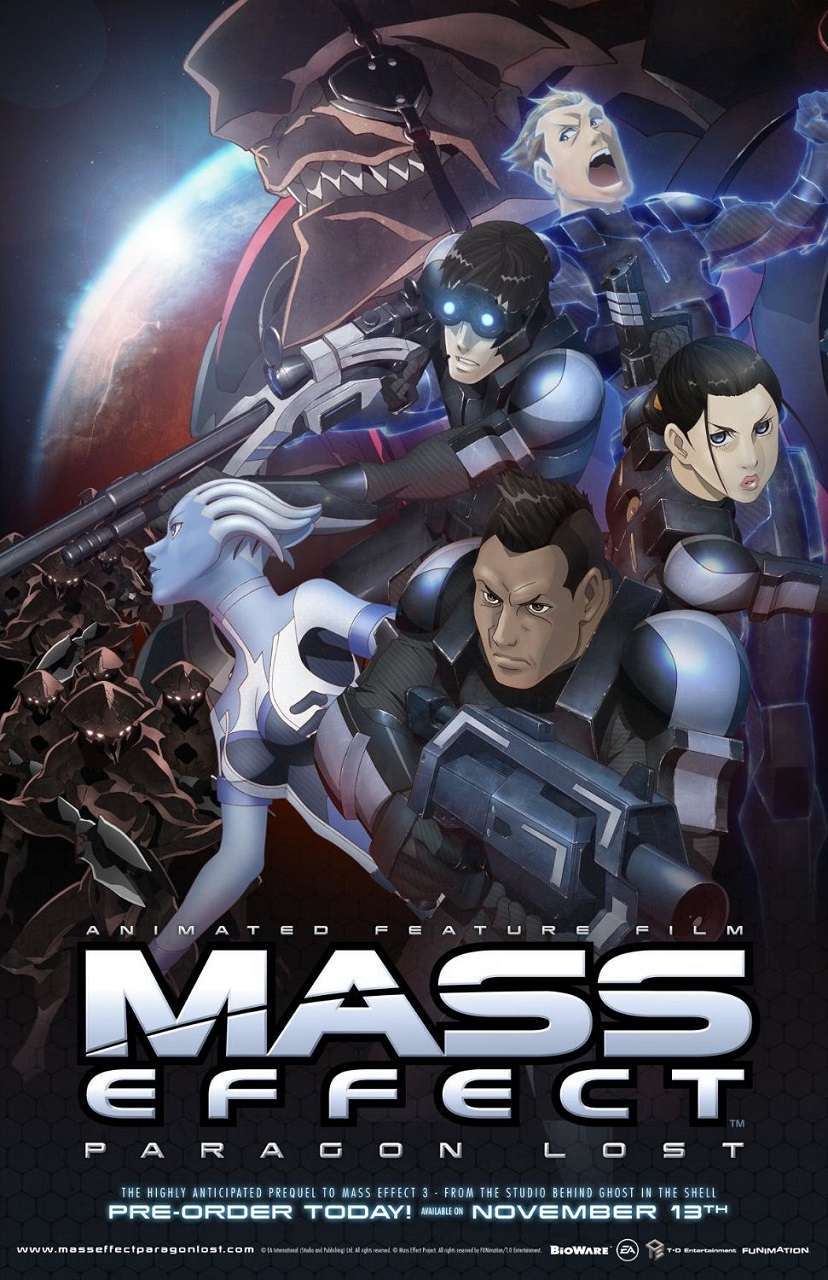 A troupe of marines from the Human Systems Alliance are despatched to aid a colony on the planet Fehl Prime that is under attack by Krogan mercenaries. With their shuttle shot down and the captain wounded, Lieutenant James Vega takes command. He goes out on a limb to personally take on the Krogan commander in combat and this strategy is successful in defeating the rest of the Krogan. Afterwards, the marines are given orders to remain on at the colony. One year later, having slotted into civilian life, they are despatched to investigate something that is blocking communications. The Asari archaeologist Treeva believes it is an artefact left by the ancient Prothean race. Just then, the colony comes under attack by an insect-like alien race known as Collectors who place the human colonists in stasis for shipping offworld. It is up to the handful of remaining marines to fight back the invasion despite the odds being overwhelmingly against them.

Mass Effect is a popular computer game series from the Canadian company Bioware. The first of these Mass Effect (2007) centres around the player character of Commander Shepard (who can either be a man or a woman depending on what the player chooses). The game creates an impressively complex galactic setting peopled with different alien species and back history. We follow Shepard in combat against the Geth machines, which slowly expands out into to reveal the new threat of aeons-old machine-intelligences known as Reapers that are harvesting humanity. (The title ‘Mass Effect’ refers to the form of hyperspatial travel used in this universe, developed out from discovered technology left by the ancient Prothean race). The complexity of the storyline and texture of the universe has gained the game a great fan following and critical acclaim. The universe and storyline has been expanded out in Mass Effect 2 (2010) and Mass Effect 3 (2012), while the success of the game has seen a series of spinoff novelisations, comic-books and action figures.

In 2011, Legendary Pictures and producer Thomas Tull acquired the film rights for a proposed live-action film adaptation. In recent years, we have seen a trend with various cinematic and computer game franchises turning to anime as a way of injecting something different into the familiar. The trend was started by the Wachowskis with The Animatrix (2003) and has been followed by other works such as Final Fantasy VII: Advent Children (2005), Highlander: The Search for Vengeance (2007), Batman: Gotham Knight (2008), Resident Evil: Degeneration (2008), Halo Legends (2010), Resident Evil: Damnation (2012), Starship Troopers: Invasion (2012), Iron Man: Rise of Technovore (2013), Resident Evil: Vendetta (2017), Starship Troopers: Traitor of Mars (2017), Batman Ninja (2018) and Altered Carbon: Resleeved (2020). Mass Effect takes the same route with Paragon Lost here.

I watched Mass Effect: Paragon Lost and kept trying to piece together the milieu and what was happening. The film is clearly made with the assumption that viewers would be familiar with the videogame universe. Even then, you realise that there is only a single character that appears in one of the videogames – Lieutenant Vega who is a supporting character in Mass Effect 3 (the film here is essentially an expansion of the complex character backstory that Vega gets in the game – where he was also voiced by Freddie Prinze Jr.), as well as a single scene appearance from the alien archaeologist Liara T’soni, one of the major characters in Mass Effect 2, who is Treeya’s mentor here, as well as references made to Commander Shepard and the starship Normandy.

Mass Effect: Paragon Lost comes as a heavy disappointment. Whatever it was that the game’s producers were hoping to get out of going anime has only resulted in a film that is delivered down around the level of a routine production line animated tv episode. Everything in the film feels like it is written and directed to cliche formula. The action scenes are generic shoot-ups that strain at cliches of military action – and feel even more tired and conducted without any feeling when you have Starship Troopers: Invasion, which excelled in this very field, in recent memory. Though the aliens are highly original creations in the videogame, here they are nothing more than ugly mugs and/or the good old modern Star Trek standby of regular humans with blue faces and a few lumps on the head. The characters are stock cutouts written with no depth.

The only recognisable name among the voice cast is that of Freddie Prinze Jr., which brings back uncomfortable association with one other disastrous military videogame adaptation that he appeared in, the live-action Wing Commander (1999). Even though the film here seems to have been written for adults – there is certainly some adult four-letter language at various points – what has been delivered is a film that seems made only with kid audiences in mind.

Still the film does have a downbeat ending that gets it rated slightly higher than it would have necessarily – where the hero must make the choice to sacrifice hundreds of colonists in order to protect the vital intel that he has obtained on the enemy and is haunted by the decision afterwards. Any other film – especially the mooted Mass Effect live-action adaptation – would almost certainly have aimed for a most upbeat ending where Vega strives with all he has to affect a last minute rescue or else decides that the lives of the colonists are more important. You can only commend the film for taking the path not paved by the easy choices.