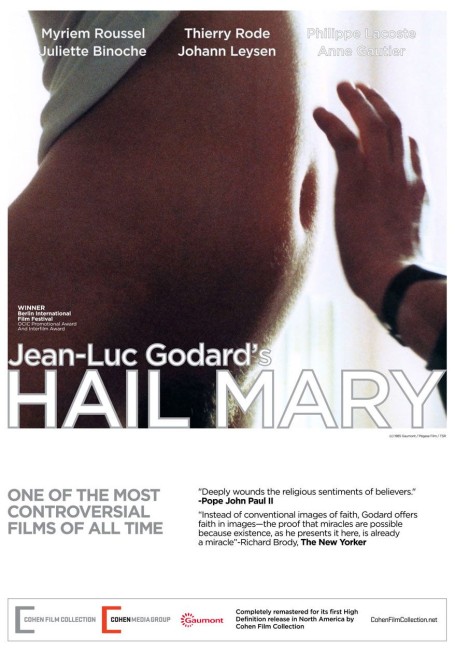 Marie, an attendant in her father’s garage, is visited by the archangel Gabriel and told that she is to divinely conceive a child and that the taxi driver Joseph is to afterwards be its father. Marie is a virgin and does not like the touch of men. Neither Joseph nor the physicians believe that Mary can be pregnant yet still a virgin. The arrangement also causes considerable sexual frustration for Joseph who aches to be able to touch Marie.

The above descriptions probably sound like a great iconoclastic joke in synopsis but on screen Hail Mary is tedious, rambling nonsense. People prance around calling themselves the assholes and cunts of the universe. There are scenes with a professor lecturing about the existence of God that have no connection to the rest of the film. Scenes are long, aimless and the pace tedium-inducing. Certainly, this is fairly much business as usual for director Jean-Luc Godard, one of the most pseudo-intellectual of the directors to emerge out of the French New Wave of the 1960s.

Lead actress Myriem Roussel has a great body; Godard thinks so too and is like a giggly adolescent languishing his camera over her parading in states of undress. One might forgive a middle-aging Godard for indulging himself, but for the glaring fact that while Myriem Roussel is supposed to be pregnant she never manages to show any outward physical sign of such on screen during any of her copious nude scenes.

If one did not know Jean-Luc Godard’s body of work better, one could savour in the thought that the tedious wallow is as much a joke on the outraged Catholics as the pretensions of the arthouse crowd that vigorously defended the film. On the plus side, there are some beautifully photographed nature scenes and some fine excerpts of classical music.

Jean-Luc Godard’s other genre films are:– RoGoPaG (1962), a continental anthology film to which Godard contributed a surreal segment portraying Paris after the nuclear holocaust; Alphaville (1965), a surreal intergalactic detective story; the Anticipation segment of The Oldest Profession in the World (1967) about an alien visitor meeting a prostitute of the future; Weekend (1967), a surreal vision of social collapse; and Oh, Woe is Me (1993) in which a god may have appeared to have sex with a woman.