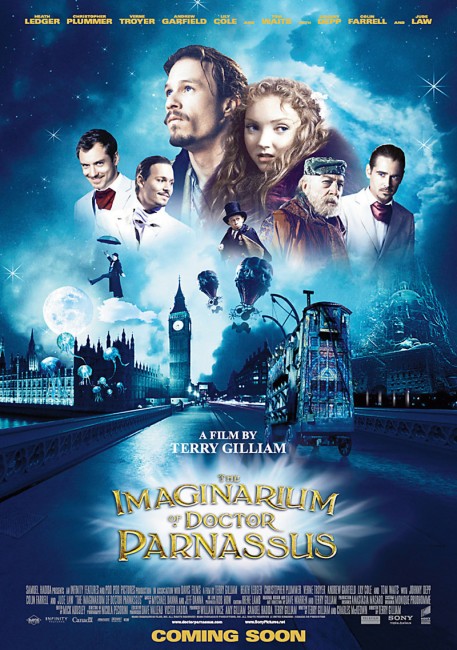 The shabby performing circus The Imaginarium of Doctor Parnassus travels through present-day London. There the aging Dr Parnassus performs along with his daughter Valentina and assistants Anton and the dwarf Percy, although passers-by seem disinterested in attending. It is three days until Valentina’s sixteenth birthday and Dr Parnassus is extremely fearful about this. In actuality, Parnassus is a thousand years old. Originally, he was an Eastern monk entrusted with telling the story that maintains the world. He was then approached by The Devil, the cheerful Mr Nick, and offered immortality. One of the many bets that Parnassus has had with Mr Nick through the ages was to obtain mortality for the sake of love – the agreement being that any child he bears belongs to Mr Nick on their sixteenth birthday. At the same time, Valentina and Anton find a man hanging from the bridge. Rescued, the man appears to have amnesia. Parnassus determines that his name is Tony and that he is on the run after a charity he headed was revealed to be a scam. Tony eagerly joins the circus and is instrumental in turning their success around. He and Valentina are attracted, much to the upset of Anton who loves her. At the same time, Mr Nick returns and offers Dr Parnassus a new bet – to see which of them is able to either claim or save five souls within the three day time limit – with Valentina’s freedom being the prize.

The Imaginarium of Doctor Parnassus was the tenth solo directed film from Terry Gilliam. Ever since becoming one of the core members of the Monty Python troupe and then co-directing their first film Monty Python and the Holy Grail (1975), Terry Gilliam has emerged as one of the most distinctive and individualistic genre directors out there. On his own, Gilliam has directed the likes of Jabberwocky (1977), Time Bandits (1981), Brazil (1985), The Adventures of Baron Munchausen (1989), The Fisher King (1991), Twelve Monkeys (1995), Fear and Loathing in Las Vegas (1998), The Brothers Grimm (2005), Tideland (2005) and subsequent to this The Zero Theorem (2013) and The Man Who Killed Don Quixote (2018). Throughout these, Gilliam has charted a unique vision – his films come filled with a constant profusion of wild surrealism, gigantic sets, and a fascination with myths and heroism where everything is undercut by pessimism or the constant puncturing of the bubble of illusion by reality.

The Imaginarium of Doctor Parnassus would not be a Terry Gilliam proper if the production did not come affected by inordinate bad luck. All Terry Gilliam films seem to exist in a state of perpetual catastrophe, either about to financially collapse or being struck by some natural disaster or production interference. Brazil was held up in release in the US because its distributor wanted to recut it for a happy ending; The Adventures of Baron Munchausen ran massively over-budget, necessitating the curtailing of Gilliam’s original vision; The Brothers Grimm stayed in release limbo for more than a year because of squabbling between Gilliam and the Weinstein Brothers. And then there was the infamous planned version of The Man Who Killed Don Quixote where, as seen in the documentary Lost in La Mancha (2002), the production ended up being shut down through a combination of natural disasters and the lead actor’s health problems, while Gilliam’s plans to revive the production in 2010 ended up financially collapsing before shooting even began.

The Terry Gilliam curse seemed alive and well with The Imaginarium of Doctor Parnassus. The production went well until the unexpected death of Heath Ledger from an accidental prescription pill overdose in January of 2008. This occurred with the film only partly completed. Faced with another disaster on his hands, Gilliam was forced to shut down production for two months (not the year that was reported in the press) during which he consider how to salvage what he had.

The decision he eventually reached was to recast the role with different actors. To this extent, Gilliam cast only actors who were Ledger’s friends – Johnny Depp, Jude Law and Colin Farrell – and explained it off as an effect that occurs when Tony steps into the world of the mirror. (Incidentally, Heath Ledger’s was not the only death to beset Doctor Parnassus with the film also suffering from the passing of its Canadian producer William Vince). It is probably fortuitous chance that Heath Ledger died at the point where Terry Gilliam was heading to Vancouver to shoot the visual effects scenes, as opposed to it having happened during any of the outdoor locations in London where it would have been much more difficult to pull the same sleight of hand that Gilliam does in centring the substitutions around Ledger’s ventures inside the mirror.

The Imaginarium of Doctor Parnassus is the most characteristic Terry Gilliam film we have had in some time. Other Gilliam films of the 00s have been compromised – The Brothers Grimm was creatively undermined by production interference, while most audiences did not like the underrated Tideland. The Imaginarium of Doctor Parnassus also has Terry Gilliam collaborating with Brazil and Baron Munchausen co-writer Charles McKeown for the first time in two decades. As such, The Imaginarium of Doctor Parnassus harkens back to the heyday of classic Terry Gilliam – the period of works like Brazil and Baron Munchausen, which were conceived as demented circuses filled with bizarre surrealism, black humour and massively scaled sets, as opposed to the more controlled script and performance-driven Gilliam films of the 1990s like The Fisher King and Twelve Monkeys.

As with any classic Terry Gilliam film, The Imaginarium of Doctor Parnassus is totally madcap in conception. Gilliam and his visual effects and production design team let themselves go wild every time we step through the magic mirror. A young boy’s journey through the landscape comes up against Christopher Plummer’s head, which pops up as a talking hot-air balloon only for the boy to shoot it down with a slingshot; an aging dowager ventures through into a world of giant-size designer shoes to then be wooed by Johnny Depp and swept up into the air on giant-sized floating lily pads where he is surrounded by flying visions of Lily Cole.

The circus itself is a wonderfully ramshackle caravan of pop-out drawers and a fold-up neon sign with an internal configuration not unakin to a Tardis. Especially good is the scene where Terry Gilliam’s camera flies through the Himalayas and down the side of a giant cracked bell to come to the temple where Christopher Plummer and his monks, who all float in mid-air on meditation mats, tell the story of the world.

The most demented sequence is the one where Jude Law is pursued into the mirror by four Russian Mafia and tries to flee up giant ladders into the sky, which then come apart, forcing him to conduct a giant-sized stilt-walk across the landscape. The sequence goes completely mad, involving a giant Christopher Plummer head in a policeman’s helmet rolling out its tongue like a carpet across the landscape, culminating in a bunch of British bobbies bursting in in suspenders and tights to conduct a song-and-dance number We Love Violence – a sequence that could easily have served as the heyday of Monty Python’s Flying Circus (1969-74) – before the Mafia run towards a giant-sized babushka waiting for them at the door of a cottage, which swallows them up and then turns out to be a steam-powered robot that pops its head to show it is operated by Tom Waits sitting in the neck.

The Imaginarium of Doctor Parnassus seems very much an autobiographical work on Terry Gilliam’s part. The Dr Parnassus character is clearly a stand-in for Gilliam – the storyteller who is struggling to feel relevant in the modern age. It is also about Gilliam – who turned 69 in 2009 – feeling old and casting himself as the aging man who regrets a lifetime of cumulative decisions yet is always being tempted back by the promise of another gamble (what more could this be than a metaphor for Terry Gilliam the filmmaker?). With typical pessimism, it is Gilliam feeling that his creative vision has damned him to a life where he is frequently a derelict on the sidewalk holding up a begging bowl and how he and his troupe are scrabbling from day to day to find the next meal.

No doubt in a dig at Hollywood executives, the person who suggests that Parnassus dress up his act and sell it to a different audience is a wanted confidence trickster, while the person who keeps spurring Dr Parnassus back to another gamble (or Terry Gilliam onto another film) is no less than The Devil. The world inside Parnassus’s head – the world on the other side of the mirror – can be read for Gilliam’s own imagination and seems divided between either lighting up customers imaginations and sending them to their fulfilment (it is a little confusing what the choice that Tony offers them actually consists of) or damnation for making the choice to seek instant gratification ie. an edifying story that enlivens and changes people vs surface flash and glitter.

Equally, The Imaginarium of Doctor Parnassus is the most optimistic Terry Gilliam film in some time – the ending where Dr Parnassus ends the bargain so that his daughter can go on and live a normal life is oddly touching. In perhaps some kind of symbolic baton-passing action, Gilliam’s own daughter Amy acts as one of the film’s producers.

As always, Terry Gilliam manages to coax amazing and unexpected things from his cast. The tragedy of Heath Ledger’s final performance overshadows the film and makes Gilliam’s themes about dying and sacrifice peculiarly poignant. Heath Ledger gives an enjoyable performance, absorbing himself in a chirpy British accent and pulling off a likeable conman appeal – the film comes to life when Gilliam lets him have his head as a showman, especially amusing being the scenes where he charms a group of upper-class ladies to come into the mirror. The film is not as great a swansong for Heath Ledger’s career as his performance as The Joker in The Dark Knight (2008) was but he carries the show well.

Perhaps the quibble that one is left with at the end is the very ambiguity of the character – Tony seems on the whole of it not to be the villain – he is even allowed to romance the girl and save the circus – yet ends up receiving a villain’s fate. What one kept rooting for throughout was his redemption, which the character constantly seems on the verge of winning. (In interviews, Terry Gilliam spoke of how he modelled Tony on former British Prime Minister Tony Blair – the silver-tongued public figure who engages in a massive confidence trick and here at one point is nicknamed ‘Tony Liar’ in the tabloids).

The Imaginarium of Doctor Parnassus is not Christopher Plummer’s swansong but if this were the last film the eighty year-old were to make, it would be perfectly fitting. The one who steals much of the show is the gorgeous Lily Cole in thick flaming red hair and delivering a performance that manages to show feisty spirit at the same time as embodying the essence of peaches-and-cream innocence.

(Nominee for Best Actress (Lily Cole) and Best Production Design at this site’s Best of 2009 Awards).