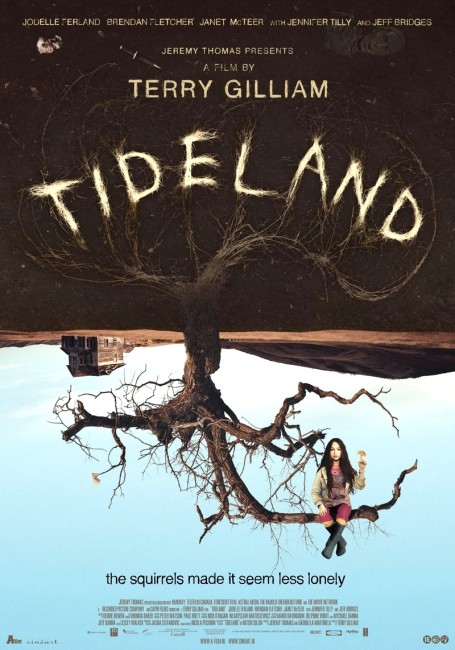 Young Jeliza-Rose lives with her father Noah, an aging rock star, and her mother who are both heavy heroin users. After her mother dies from an overdose, her father takes them back to stay at his mother’s place in the cornfields of the Midwest. The house is long abandoned but they settle in and make it home. Jeliza-Rose plays in the cornfields with her friends, a collection of doll’s heads that talk to her. She cautiously befriends the initially fearsome-seeming one-eyed Dell who lives at the next farm and Dell’s brother Dickens who has been brain damaged in an accident. Dickens introduces Jeliza-Rose to his ‘submarine’ and tells her some of his secrets. Afterwards, Jeliza-Rose decides that Dickens is her boyfriend. What Jeliza-Rose does not realise as she plays is that her father has died of an overdose and his body sits decomposing in the house.

Terry Gilliam is one of the great talents in fantastic cinema. Gilliam first emerged as a member of the Monty Python troupe in tv’s Monty Python’s Flying Circus (1969-74) – his face was not so well known but what everyone remembers is the surrealistic animated cut-outs he created. He co-directed the Python feature Monty Python and the Holy Grail (1975) and co-wrote/appeared in the other two Python films Monty Python’s The Life of Brain (1979) and Monty Python’s The Meaning of Life (1983). Gilliam became a solo director with Jabberwocky (1977) and gained major strength with films like Time Bandits (1981), Brazil (1985), The Adventures of Baron Munchausen (1989), The Fisher King (1991), Twelve Monkeys (1995), Fear and Loathing in Las Vegas (1998), The Brothers Grimm (2005), The Imaginarium of Doctor Parnassus (2009), The Zero Theorem (2013) and The Man Who Killed Don Quixote (2018). All of these are works that sit inside the fantasy genre.

As much as Terry Gilliam’s films have been acclaimed for their brilliance and wild eccentricity, Gilliam, rightly or wrongly, has also gained a reputation as someone who makes problem-ridden or out of control productions – the release of Brazil was caught up in a tug of war between Gilliam and Universal who wanted to insert a happy ending; The Adventures of Baron Munchausen spiralled madly over-budget and nearly ended up financially collapsing and with Gilliam fired; there is an entire film, Lost in La Mancha (2002) devoted to one Gilliam production, The Man Who Killed Don Quixote, that collapsed due to a series of on-set disasters; while The Brothers Grimm ended up in a year long stand-off between Gilliam and the Weinstein Company in a fight over final cut – enough time for Gilliam to put together and complete Tideland. Gilliam seems to suffer from plain bad luck – his subsequent film The Imaginarium of Doctor Parnassus had a pall cast over it by the unforeseen death of star Heath Ledger part way through shooting, while his attempt to revive The Man Who Killed Don Quixote in 2010 also ended up collapsing before shooting began.

Gilliam put Tideland together as an anathema to the troubles he experienced with the studio backed The Brothers Grimm – Tideland was financed independently and shot on a low-budget. Vincenzo Natali, himself the director of films like Cube (1997), Cypher (2002), Nothing (2003) and Splice (2010), shot the Making Of documentary for Tideland. At one point, Natali interviews producer Gabriella Martinelli about the Gilliam reputation and she candidly admits the difficulty they had in getting an insurer to sign off on the film because of this. Natali searches for signs of disaster throughout the shooting of Tideland, but the production remains remarkably trouble free and the most he gets is recording the loss of a day’s shooting when Jodelle Ferland gets a bee sting and another when bad weather disrupts outdoor location work.

For reasons not clear, Tideland ended up receiving a very negative reception from most critics. Contrarily, I liked it. Indeed, with the disaster that was The Man Who Killed Don Quixote and the uncomfortable and unhappy results that were The Brothers Grimm, Tideland is the one Gilliam film that flies the most successfully in some years. It is as though the independent financing has been the equivalent of a rest cure that has freed Gilliam after the problems with the Weinsteins and The Brothers Grimm.

Tideland is a return to the type of Gilliam film that we had at the point of The Fisher King, which is still for my money the best film that Gilliam ever made. Tideland could easily be regarded as a spiritual sequel to The Fisher King – not so much in terms of characters and plots (although it does feature a return performance from Jeff Bridges) but in terms of similarity of approach. It taps into the same trompe l’oeil effect that drove The Fisher King and The Man Who Killed Don Quixote – of a fantasy adventure that exists in the minds of the characters who have transformed ordinary aspects of the world around them into something fantastical. (Indeed, Tideland is, one suspects, the same delicate balance of the fantasy of the imagination and the real world that the more mainstream Bridge to Terabithia (2007) was aiming to do (albeit in a more straight-laced way), before it ended up being overtaken by special effects). The dexterity with which Gilliam sits atop his metaphors and keeps blurring back and forward between the allegorical and the real, where dark things that neither the child protagonist nor her mentally handicapped companion understand take on symbolic meaning, comes with considerable brilliance.

Tideland is anything but the anodyne child’s fairytale it seemed in its promotion. This is clear from the opening scenes that contrasts allusions to Alice in Wonderland (1865) with images of Jodelle Ferland helping shoot up both her father and mother with heroin. (There are numerous Alice in Wonderland allusions throughout – Jodelle Ferland dropping one of her doll’s heads down a rabbit hole, while Janet McTeer even quotes several sections of rhyme from Alice at one point). Throughout Jodelle Ferland plays with a half-dozen severed heads of dolls, which she talks to and regards as her best friends. Things get very strange when she meets Brendan Fletcher and he takes her to visit his ‘submarine’ (a mocked-up hideout in the middle of the cornfields) and starts talking about the nearby train line as being a leviathan-like shark.

There is a constant swim of water and sea imagery – between Brendan Fletcher’s submarine and ‘sharks’ and Jeff Bridges’ claim that he is going deep-sea diving when he sits down for his last fatal drug overdose. In a striking dream sequence, Jodelle Ferland sees the one-eyed Janet McTeer as a pirate captain and then swims down into the submerged home. All of this is counterpointed to the unpleasant image of Jeff Bridges’ dead body sitting in the living room, clearly dead and having decomposed more each time we see him. Things become completely grotesque when Janet McTeer discovers the body, recognises it as her lost love and then stuffs and mounts it – with Jodelle Ferland even coming up to toss one of her doll’s heads inside the stomach before it is sewn up.

Things start to become genuinely disturbed when the mentally handicapped Brendan Fletcher starts talking in his child-like disconnected way about how the grandmother used to kiss him with her tongue and then comes and gives Jodelle Ferland a kiss to show her what he means. You sit queasily wondering how far into taboo territory Terry Gilliam is going to push the scene. Things get even stranger soon after as Jodelle Ferland starts referring to Brendan Fletcher as her boyfriend and acting in a way that seems to be teasing and leading him on. This culminates in a completely screwed-up scene where the two start making out in the dead grandmother’s bedroom, where Janet McTeer finds them and she and Jodelle Ferland start fighting as Brendan Fletcher goes into convulsions on the floor, the fight culminating with McTeer putting her boot through the desiccated corpse of the grandmother on the bed.

The surreal vision of the American Midwest cornfields that we have (Saskatchewan prairie land in actuality), all fed through a child’s distorted point-of-view and imagination, is strongly reminiscent of The Reflecting Skin (1990). There is also something that reminds of Vincent Ward’s Vigil (1985) about a young girl in remote New Zealand farmland transforming elements of the world around her into a strangely threatening fairytale through which swim adult undercurrents and metaphors.

Tideland is certainly a strange and indulgent film, particularly when it comes to the acting. There are thoroughly bizarre performances from British actress Janet McTeer, unrecognisable behind an eye patch that makes her look like the wicked witch, and in Brendan Fletcher’s affectation of mental handicap. But then this makes it a pure Gilliam-esque work – Gilliam has ability in his films to twist everything to the point that what we would consider as completely over-the-top lunatic acting in any other film comes as an accepted norm. In the central child’s role, young Jodelle Ferland gives an exceedingly strong performance. In the first third of the film, Jeff Bridges gives a brilliant performance as the aging rock star turned smack addict. An unrecognisable Jennifer Tilly turns up as the mother who dies in the first few scenes.

(Winner in this site’s Top 10 Films of 2005 list. Nominee for Best Adapted Screenplay and Best Actress (Jodelle Ferland) at this site’s Best of 2005 Awards).