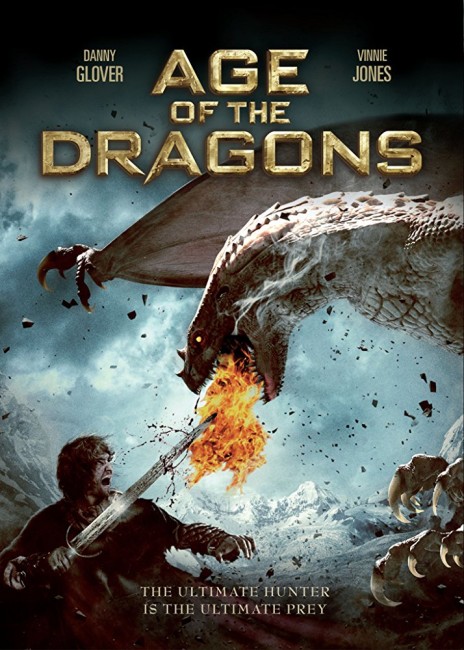 Ishmael and his friend Queequeg sign up to act as harpooners aboard the land vessel Pequod on a mission of hunting for dragons whose vitriol is of great value. The Pequod is captained by Ahab who has been burn-scarred and left unable to come out in daylight as a result of a childhood encounter with a legendary white dragon, which killed his sister. All the others warn Ishmael that Ahab has become mad in his single-minded quest to kill the white dragon. As they set out, Ishmael is also attracted to Rachel, Ahab’s adopted daughter, who acts as The Pequod’s navigator. As they journey into the remote reaches in search of the white dragon’s lair, a prophecy that only one man will survive the expedition starts to come true as the crew are killed by a combination of the dragons they encounter and Ahab’s reckless madness.

Age of the Dragons comes with a concept that sounds so ridiculous it might actually work. Namely, it is a version of Herman Melville’s Moby Dick (1851) rewritten as a fantasy film. Moby Dick is a literary work concerning the sea captain Ahab who is single-mindedly obsessed with hunting and killing a white whale at the cost of everything else. It should be crucially noted that it is a work that comes with no fantasy elements in it.

By contrast, Age of the Dragons transplants Moby Dick into a generic fantasy kingdom and turns the white whale into a dragon but otherwise is exactly the same story where not even the names of the characters have been changed. Oddly enough, there is a genre precedent for this – Philip Jose Farmer, a science-fiction writer known for his deconstructions and meet-ups between fictional characters, had Ishmael transplanted to another planet via a time warp to hunt flying whales in The Wind Whales of Ishmael (1971).

The film is surprisingly faithful to the story, right down to even incorporating stretches of Herman Melville’s dialogue. There are also additions that have come in. Ahab gets an (adopted) daughter he never had in the book, who serves to add a romantic plot with Ishmael.

Some of the translations into fantasy just fail to work – The Pequod goes from a sailing ship to an ungainly wheeled land vessel that is intended to act like a ship. It is never exactly explained how in this world that seems to exist prior to the industrial revolution and presumably the invention of the combustion engine the vehicle is powered to move across the landscape. You would also imagine without the presence of paved roads that this would be an extremely bumpy journey.

The other oddity is how, with the film’s slender budget, The Pequod now seems like it is manned by a total crew of about six people. The results never fully work. The whaling ship story fails to quite work in a fantasy setting – it results in more character and literary ambition than is usual for a B-budget film like this but equally the fantasy world is created only as much as is necessary to carry the story and we see little of its detail and texture beyond that.

The film also falls down in some of its casting. The headline names it has are Danny Glover and British footballer turned actor Vinnie Jones, as well as the minor name of Corey Sevier cast as the hero Ishmael. It appears that the film only had the budget to afford Glover and Jones for a few days. Jones, though second-billed, is slotted into the role of Mr Stubb, not exactly one of the most prominent characters in the story, and is killed off early on. Glover only had eleven days of availability and so this is worked around by having someone else stand in for him covered in a hood and inuktitut snow goggles, while the others talk about how he cannot appear in the daylight scenes due to having an allergy to sunlight after being burned by the dragon.

Ryan Little is a director who has worked on a variety of low-budget films, most prominently the war film Saints and Soldiers (2003) and sequels. His only other genre work has been the haunted house film House of Fears (2007).