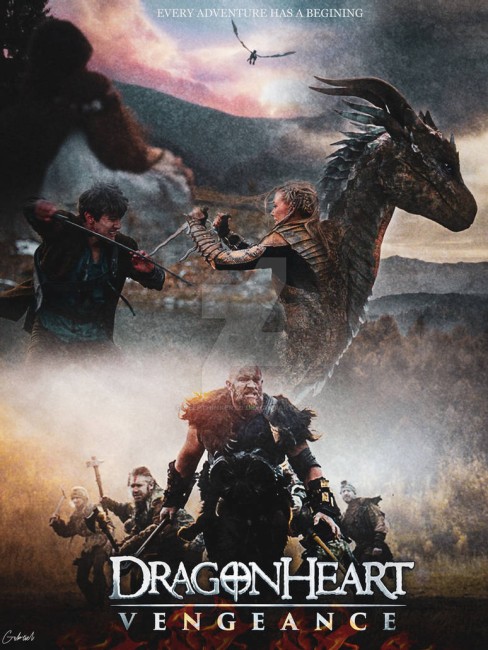 In Wallachia, the farmboy Lukas is witness as four mercenaries kill his parents. He observes as the killers agree to separate to the four points of the compass and gather their forces. Lukas then goes to the nearest town where he sells the family cows and offers the money to any men who will help him take vengeance. As a group of locals try to take Lukas’s money, Darius comes to his aid to fight them off but Lukas declines Darius’s offer to accept the task. Others suggest that Lukas go to the ice caves and ask aid of the dragon Siveth who has been known to fight on people’s behalf. Lukas does so but Siveth turns him down. Lukas continues on his own but finds that Darius has been following. As they fight off barbarians, they are aided by a horse who transforms into Siveth who has decided to aid Lukas after all. There is bitterness between Siveth and Darius who felt betrayed by her in the past. As the three travel on, Lukas begins to learn the price of vengeance and what was truly behind the murder of his parents.

DragonHeart (1996) was a modest success when it came out. The story of a friendship between a rogue and a dragon, it was likeable but I doubt if there would be many people putting on their lists of memorable classics or even that many who remember it. That said, producer Raffaella De Laurentiis, the daughter of the late Italian movie mogul Dino de Lauentiis, has retained the rights and made a string of sequels. So far we have had DragonHeart: A New Beginning (2000), Dragonheart 3: The Sorcerer’s Curse (2015) and Dragonheart: Battle for the Heartfire (2017). DragonHeart: Vengeance was the fifth film in the series.

Raffaella De Laurentiis has milked the DragonHeart copyright for everything she can for over twenty years now. Where the fanbase for the films comes from such that Raffaella keeps churning more of them baffles me. All of the films are cheaply shot; some have decent CGI dragon effects, others less so. There is nominal continuity connection to the first film made by some of these – all of the films circulate around (some more cleverly than others) a friendship between human and dragon, as well as the idea of the dragon that has the ability to bequeath part of its heart and bond with another human.

In DragonHeart: Vengeance, the rogue is replaced with a young farmboy who appeals to the dragon to help him seek him find the titular vengeance. The dragon sharing its heart part is twisted on its head in slightly different ways and he is joined in his quest by another roguish adventurer. The biggest change to this time is that we have a female dragon voiced by no less than Helena Bonham Carter.

That said, the film is still formulaic. Jack Kane has a certain callow earnestness as the farmboy, although Joseph Millson just comes across as glib when he tries to do the cocky adventurer thing. The show’s main stumbling block is Helena Bonham Carter’s voicing of the dragon where she makes it sound like a severe but eccentric schoolmarm. Her presence also gives the dragon much more of a comic playing than any of the other films in the series since the first – there is one mildly amusing scene where the dragon tries to give Jack Kane courtship advice.

While some of the other sequels have produced quite good dragon effects, the ones here go back to making it look just like a big CGI cartoon character. The plot runs in exceedingly predictable arcs where good guys win out, the bad people are overcome and the young hero learns he doesn’t want to follow the vengeance trail after all.