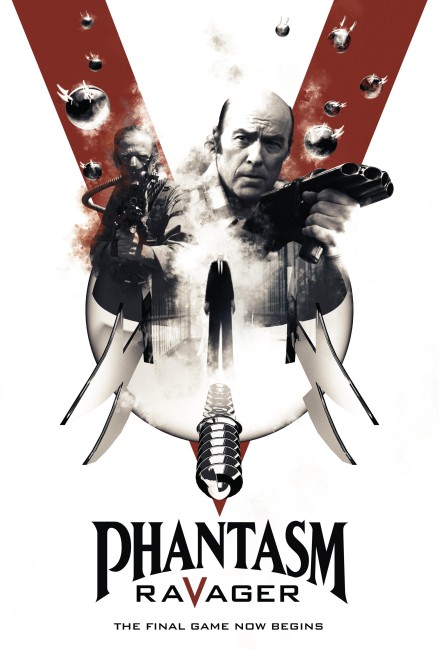 Reggie returns from the other dimension. He soon finds himself pursued by silver spheres and The Tall Man who wants Reggie to surrender to him. In refusing, Reggie is thrown through a bewildering series of timelines flipping between the present, a world where he is an old man placed in a psychiatric institution and everything that happened is a delusion, and a future where he and Mike are part of a resistance fighting against the silver spheres that have taken over the world.

Way back in the era before A Nightmare on Elm Street (1984) made dream horrors the big trend of the 1980s, there was Phantasm (1979) – The Never Dead if you live in Australasia. The film was a more than reasonable success when it came out, although became overshadowed and forgotten among the tide of Elm Street sequels and copies that soon dominated the decade’s landscape. Nevertheless, Phantasm‘s mix of surreal dream horrors, science-fiction and the downright strange – undertakers from other dimensions, the dead resurrected as dwarves, flying silver spheres that drill through people’s head – has made it into a cult film over the years. Director/writer Don Coscarelli and most of the principals returned to the franchise several times with Phantasm II (1988), Phantasm III (1994) and Phantasm: OblIVion (1998).

It has been eighteen years since the last Phantasm film and rumours of Phantasm 5 circulated off and one throughout much of this period. Apparently, the film started shooting in 2008 as a proposed web-series that would have centred around the adventures of Reggie. This never went ahead and the shot footage blossomed into this feature-film sequel. Phantasm: Ravager emerges at the same time as Don Coscarelli offers up a brand new version of the original with Phantasm: Remastered. The film also comes out at the last possible opportunity for it to do so, given that Angus Scrimm died at the start of 2016 (aged 89) – although after all his scenes for Ravager had been completed.

Don Coscarelli has stepped back from the director’s chair, the only of the Phantasm films in which he has done so, although is still credited as producer and co-writer. The role of director has been taken over by David Hartman, who makes both his feature-length and live-action debut, after two decades of working in television animation. He had previously acted as a production consultant on Don Coscarelli’s two most recent films Bubba Ho-Tep (2002) and John Dies at the End (2012).

Phantasm: Ravager sets in in the same way that the Classic Star Trek movies used to, ones that became less about exploring new worlds than the regular cast playing to their camaraderie and fan appeal up on the screen. The film brings back all the regulars – Angus Scrimm, Reggie Bannister and Mike Baldwin, while Bill Thornbury and Kathy Lester, both looking a lot less young than they used to, turn up for brief appearances. And if you keep watching through the end credits, Gloria Lynne Henry, Reggie’s love interest from Phantasm III, reappears in a rather funny scene with Stephen Jutras.

Apart from Angus Scrimm, who looks as though he has barely aged since the first film, most of the others are showing their years. It becomes an abrupt shock seeing the flashback footage with the eleven-year old Mike Baldwin and contrasting this with him here now in his early fifties. Due to the footage mixed from different eras, we get to see Reggie Bannister in the older material shot where he was in his fifties (where he is looking fortysomething) and the recently shot material with him in his late sixties. This is ingeniously explained away as him flipping between eras where he would appear to be going through what Mike did at the start of Phantasm II. The end of the film certainly comes in a way that would seem to be bidding a farewell to the characters.

The Phantasm series arguably had passed its critical peak a couple of films ago and certainly by the time of OblIVion. By now, it feels like a franchise that has well run its creative course and that the last few films are coasting by, simply shuffling the same characters and same plot elements – The Tall Man, silver spheres, dwarves, other dimensions – around in slightly different combinations without delivering anything radically new to the mix.

This is certainly the case with Phantasm: Ravager. The film slips back and forward between different time periods and various fights with the Tall Man and his agents without ever actually coalescing into a plot. This is okay but blurs into a much of a muchness. David Hartman seems to lack what Don Coscarelli did and the film fails to ever attain the same sense of dreamlike eeriness that at least the first two Phantasm‘s did.