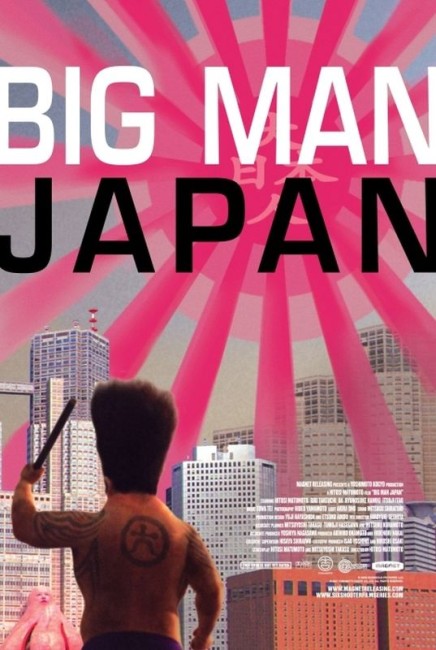 A documentary crew follow the dishevelled and aimless Masaru Daisato. He has the ability to zap himself with large amounts of electricity to become the giant Big Man Japan. As Big Man Japan, it is his job to take on and defeat the various monsters that attack the country. He has an agent and a tv show, although his most recent fights are seen to be lacking the ratings they once received and audiences are expressing disappointment.

Big Man Japan was a directorial/starring debut for Japanese comedian Hitoshi Matsumoto. Along with Masatoshi Hamada, Matsumoto performs as part of the popular duo Dauntaun (Downtown). Matsumoto had appeared in several films but made his directorial debut with Big Man Japan. He subsequently went onto direct Symbol (2009), a comically cryptic film about a man trapped in a room, Scabbard Samurai (2010) and the very strange R100 (2013).

Big Man Japan is essentially a parody of the Japanese superhero and giant monster film. The hero is an average schmuck who transforms into a giant clad in a purple bikini brief and wades in to sort out monsters. The monsters become increasingly more absurd as the film goes on – the Strangling Monster, which looks like a version of the Michelin Man with a bad comb-over that tears up buildings with a band it has in lieu of hands; the Hopping Monster, a head that hops about on top of a single leg; the Staring Monster, which is like a fuzzy ostrich with no head, just an eyeball on the end of a very long stalk that it picks up and throws at people.

There are some very funny scenes with the mating Stink Monsters where Hitoshi Matsumoto tries to reason with the female as a young male turns up and starts frenetically hopping up and down in a mating dance. Or the appearance of the Child Monster, which Hitoshi Matsumoto picks up only for it to promptly sink its teeth into his nipple, causing him to drop the baby, whereupon its soul is seen departing (as every monster is killed, its soul is seen travelling heavenwards in a beam of light) and producing an instant plummeting of Big Man Japan’s reputation because he has killed a child.

Everything is delivered in perfect deadpan – like the scenes where Hitoshi Matsumoto’s agent (Ua) tells him: “I’ve found a sponsor for your chest. So try not to fold your arms from now on” – and after he next powers up we see a logo for Katokichi Foods emblazoned on his chest. The battle between Big Man Japan and the monsters is seen by the public in terms of a wrestling match with audiences expressing disappointment that he is not what he used to be and flagging enthusiasm causing his tv show to be relegated to screening at 2 am. There are charmingly absurd images such as when Hitoshi Matsumoto’s senile grandfather powers back up again and stumbles around the city in a giant diaper, picking up aircraft as though they were toy planes.

There is a bizarrely nonchalant ending where the Super Justice family of superheroes turn up – all seemingly modelled on tv’s Ultra Man (1966-7) – and engage in an absurd battle with a fluffy-toy like devil monster, kicking it, stripping its clothing, tearing out its stuffing and even using baby Super Justice as a football, before flying off with Big Man Japan and as the end credits play being seen going over and criticising the way he performed during the encounter.

One of the more amusing aspects of the film is the fact that it is made as a mockumentary where a film crew are interviewing Hitoshi Matsumoto. This is abandoned somewhat when the film gets to the special effects scenes, but proves amusing – certainly, the idea of a mockumentary about a giant superhero in purple briefs sorting out giant monsters is one of the more whacked out ideas to be made as Found Footae at least up until The Troll Hunter (2010). All of this is shown in a tone of complete deadpan that deliberately never keys you in as to whether you should be laughing or not.

On the minus side, the film’s pace is somewhat slow. There is no plot, so much as the film consists of a series of incidents and monster encounters one after the other. All of the Big Man Japan and monster scenes are conducted digitally. The effects are perfectly competent, although never leave you less than clear that they are digital effects – there is a decided difference between the Hitoshi Matsumoto we see in the live-action scenes and the digital representation of him, for instance.

For some bizarre reason, an English-language remake has been announced.