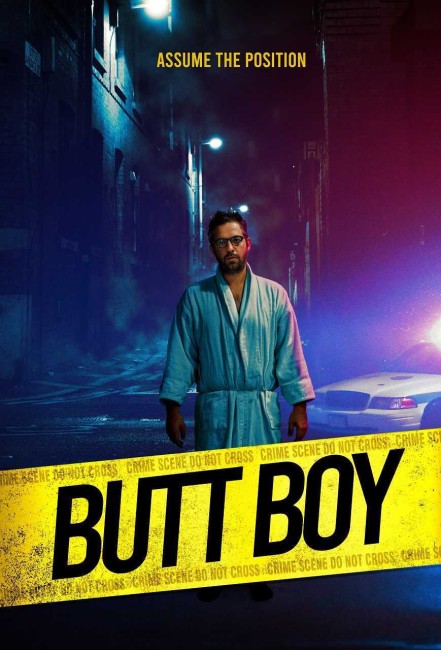 Chip Gutchell is an IT employee at an office in Kritika County, Florida. Following a rectal examination by his doctor, Chip discovers the pleasure of having things inserted into his anus. Starting with small objects, he causes cakes of soap and the tv remote to disappear up his ass, followed by the family dog. Chip’s fetish grows to the point that he is responsible for causing a child to disappear. Nine years later, police detective Russel B. Fox joins AA and is paired with Chip as a sponsor. Russel is then assigned to investigate Chip’s workplace after a child that was brought in on parents’ day goes missing. As he investigates, Russel comes to the conclusion that Chip is causing people to disappear up his ass and sets out to prove it.

Butt Boy was a full-length film directed, written by and starring Tyler Cornack. Cornack had earlier made The Pocketeers (2016), although as far as I can ascertain that does not appear to have been released. Cornack and co-writer/producer Ryan Koch have also maintained the Tiny Cinema YouTube channel since 2016, producing films of only around a minute in length. Cornack had previously made the genesis of Butt Boy with the 60-second short film Butt Boy (2016). In both films, Cornack also plays the lead role of the milquetoast man with the butt fetish.

I have gotten very jaded about the movie business in the last few years. Everything is made in terms of what has gone before, of what can copy a prevailing trend. Originality is in short supply and the willingness of filmmakers to go out on a limb to takes risks and push boundaries has become increasingly rare to find. Every so often though there is something that goes against the prevailing winds and stops you in your tracks. And then there are works like Butt Boy.

It boggles the mind that a work like Butt Boy could manage to attract financing and get made. Just look at the premise – a man develops a fetish for sticking things up his ass and is soon causing household objects, pets and children to disappear up there. The mind does a double-take thinking about what a pitch session to investors must have been like and how half of them must either have ended up spluttering into their lattes or looking for the quickest way to get out of the meeting.

I really liked Butt Boy as it started off. The premise appealed to my twisted sensibilities and championing of films willing to go out on an edge. Tyler Cornack directs with a sense of humour that is obliquely deadpan, not to mention understated. Like where we cut from his character eyeing the family dog to the wife (Shelley Dash) wondering where it has gone, or of Cornack’s character looking on at a mother with a baby in the park to the next scene where the police are knocking at the door conducting a search for the missing child.

On the other hand, Butt Boy never quite sustains this. It is carried a good way in by the outrageousness of the premise but then you realise there is not too much more to the film than that. After the introduction of Tyler Rice’s detective, the show gets diverted off into being about Rice trying to prove the case against Cornack’s Chip. By this point, the outrageousness of the concept tapers off and it becomes somewhat the lesser. It is a film that sounds far more interesting and edgy on paper than it does in actuality. You feel as though it would have worked far more succinctly as a short film but that the idea feels padded at being spun out to full length.