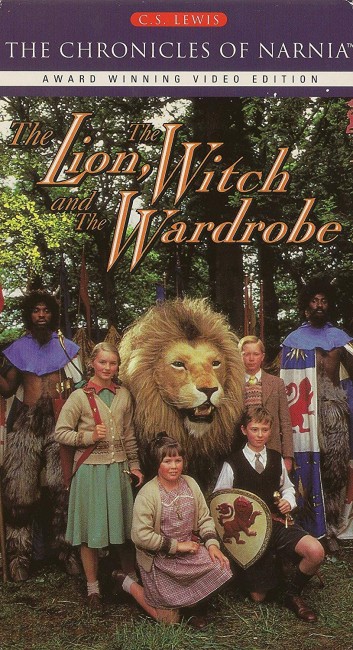 England, 1940. Four brothers and sisters – Peter, Susan, Edmund and Lucy – are sent away from the Wartime Blitz in London to stay in a large house in the country. While exploring the house, Lucy enters a wardrobe in the attic and is startled to find that it opens into a frozen land. There she meets a faun Mr Tumnus who tells her that she is in the land of Narnia. She returns back through the wardrobe but no time has elapsed and the others disbelieve her story. She later re-enters the wardrobe but this time Edmund follows her. There Edmund meets The White Witch, who has claimed rulership of Narnia and holds the land under the spell of winter. The White Witch seduces Edmund with the promise of some Turkish Delight and persuades him to bring the others back in through the wardrobe. However, when they return to the real world, Edmund becomes devious and denies the existence of Narnia to the others. When guests come, the four children are forced to hide in the wardrobe and in doing so all of them enter Narnia. There they become hunted by the White Witch who wants to prevent a prophecy that says that four children will come to claim the throne of Cair Paravel and that this will spell her end. She captures Edmund. The only hope of saving him is for the others to seek the lion Aslan, Lord of the Forest. However, in order to defeat the Witch and save Edmund, Aslan must lay down his own life.

Though they are much loved children’s favourites, I must confess to never having been much of a fan of C.S. Lewis’s Narnia books. C.S. (or Clive Staples) Lewis (1898-1963) was a professor of mediaeval and renaissance literature at Oxford. It was there that he became good friends with fellow academic J.R.R. Tolkien and formed the writing group The Inklings. C.S. Lewis wrote seven Narnia books – The Lion, the Witch and the Wardrobe (1950), Prince Caspian (1951), The Voyage of the Dawn Treader (1952), The Silver Chair (1953), The Horse and His Boy (1954), The Magician’s Nephew (1955) and The Last Battle (1955) – and these enjoyed much success.

It is however important to place the Narnia books in the perspective of the rest of C.S. Lewis’s life – C.S. Lewis was first and foremost a writer of Christian apologetics and secondmost a writer of fantasy. All of C.S. Lewis’s works are shot through with Christian diatribes and allegories – other works like the Out of the Silent Planet sf trilogy play out questions of Original Sin and The Fall out on Mars, while works like The Screwtape Letters (1942) and The Great Divorce (1945) are dialogues set in Heaven and Hell and deal with damnation. Far more so than he can be classified as a writer in the fantasy or children’s genre, C.S. Lewis’s greater output was of non-fiction books about Christianity – his work Mere Christianity (1952) has become a handbook for many Christians.

It is only when the greater perspective of C.S. Lewis’s life becomes apparent that the Narnia books start to seem the lesser – rather than works of fantasy, they become no more than allegories for faith preached to children. Read the lion Aslan for Jesus Christ and the allegory starts to become apparent. Each of the Narnia books illustrate some facet of the Christian faith – The Lion, the Witch and the Wardrobe plays out as an allegory for Christ’s sacrifice on the cross to save humanity, where Aslan allows himself to be sacrificed (and is then resurrected) to redeem Edmund who has been corrupted by the White Witch. Compare the Narnia series to Lewis’s friend J.R.R. Tolkien’s famous fantasy series, The Lord of the Rings (1954-6). Though Tolkien was a Catholic, The Lord of the Rings is a work that stands on its own as a fantasy, rather than seems to be a Sunday School sermon preached in the guise of a children’s story. It is, for example, difficult to ever discern what Tolkien’s religious beliefs are based on a reading of The Lord of the Rings.

The Chronicles of Narnia: The Lion, the Witch, & the Wardrobe was the first of a series of Narnia adaptations made by BBC tv. The Lion, the Witch, & the Wardrobe was followed by three other serials that adapted the next four books that chronologically followed in the series – The Chronicles of Narnia: Prince Caspian (1989), The Chronicles of Narnia: The Voyage of the Dawn Treader (1989) and The Chronicles of Narnia: The Silver Chair (1990). The BBC abandoned interest in the other books in the sequence after that point, largely it appears due to logistics – The Horse and His Boy features talking horses as central characters, while The Last Battle takes the story back to Wartime England. I must confess when the tv Narnia series first aired, I ended up enduring it but switching off altogether at the characters. The toffee-nosed snobbishness of the character of Peter in particular makes it difficult to regard him as a sympathetic and heroic character. (Although to be fair to the tv series, it is at least being faithful to the Wartime era upper-class milieu of C.S. Lewis’s books).

The Lion, the Witch, & the Wardrobe is furthered weakened by cheap BBC production values. It is hard to know why the BBC did not deem the Narnia adaptations worthy of a decent budget – certainly the episodes of Doctor Who (1963-89) that were being produced around the same time had reasonably polished and decently budgeted special effects, so it can’t be put down to lack of technical knowhow on the part of the BBC’s in-house effects shop. The visual effects are shabby, with the blue screen work being clearly evident.

The most painfully tawdry aspect of The Lion, the Witch, & the Wardrobe is when it comes to the many non-humanoid characters that inhabit the story, which are simply represented by animation. There is a particularly poor scene where Edmund is rescued from a nasty fate by a cheaply animated pegasus. The animated pegasi and griffins that join in the climactic battle scenes have the contrary effect of disrupting the suspension of disbelief through the obviousness of what one is seeing. Aslan is a full puppet creation and comes off somewhat better, even if its’ being a special effect clearly does show through some of the time and it is not lip-synched to the dialogue. At least the story allows Aslan to come across with an undeniably magisterial presence and we certainly get the full sense of sacrifice that it undergoes.

Another disappointing aspect of The Lion, the Witch, & the Wardrobe is director Marilyn Fox. Her marshalling of the drama is slow and over-emphatic, which has the effect of making the fantasy seem folksy and stagebound. She is particularly poor when it comes to the fight scenes, which lack any kind of conviction whatsoever. (To the series benefit, Marilyn Fox was dumped from the later adaptations and replaced by Alex Kirby who made the fantasy fly more convincingly). There is the odd moment where the series comes to life with some fantastique imagination – the peculiar image of a streetlamp lit up in the middle of a snowy forest; the appearance of Father Christmas handing out gifts to the woodland creatures. Some of the non-human characters have undeniable appeal, especially the characters of Mr and Mrs Beaver.

The Lion, the Witch, & the Wardrobe is further dragged down by the laughably overwrought performance given by Barbara Kellerman as the White Witch. Barbara Kellerman hangs from the rafters and lets all stops completely go, so much so that the entire performance comes out as a one-note shriek. It is acting so overboard that the absurdity of the performance almost entirely detracts from the character she is meant to be playing.

At other times, it seems really, really difficult to swallow some of the character motivation. Like how Edmund goes from the promise of more Turkish Delight by the Witch if he will bring the other children to her, to suddenly instantly become a devious liar and then the equivalent of someone who is damned in the Christian outlook. If everybody who tried to persuade others to do something in return for a reward or ulterior motive were regarded as damned, then the world would be a sorry place. (To me, damnation should always be an issue where the damned party knows fully what they are doing and ends up doing it anyway; Edmund seems like a character who is merely misguided or mildly selfish in his actions).

Other scenes like where the professor argues a chain of logic as to why there is no reason at all why one should not believe in Narnia are downright bizarre. As is the scene that contrives to get all four children to enter the wardrobe – the officious Mrs Macready’s friends enter the house and for some reason insist on going all the way up to the attic as opposed to the drawing room and the only place for the children to retreat to is the wardrobe in the attic rather than their bedrooms or any of the numerous rooms in the mansion. The way the sequence of events is presented it only shouts out incredibly contrived.

The major problem with the characters are ones that the series inherits from C.S. Lewis – as heroes in the story, the children do almost nothing to earn their triumph. Everything throughout is done for them by Aslan or the Beavers, or with magic gifts given to them by Father Christmas, while the outcome of the story is foretold by prophecy anyway. At the most absurd point, Peter leads the army into the battle despite having absolutely no experience in combat whatsoever. Certainly, the series is faithful to the book and if the show is heavily weighed down by Marilyn Fox’s dull and unimaginative direction, poor production values and Barbara Kellerman’s ludicrous overacting, at least the drive of the original story keeps it going.