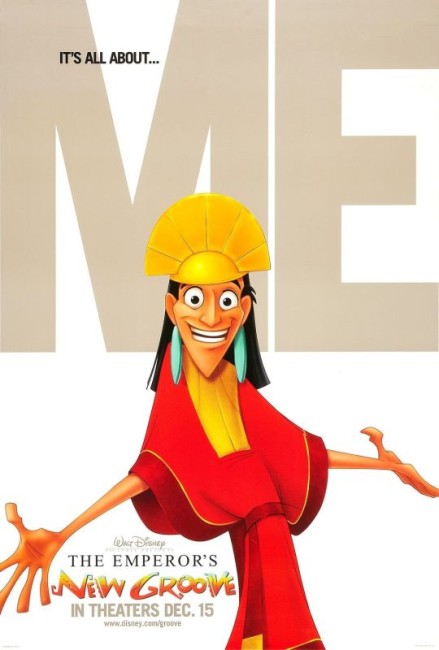 The Aztec emperor Kuzco rules his empire in the belief that everything centres around him alone. After he fires his calculating advisor Yzma, she schemes to poison Kuzco off. However, due to a mix-up on her part, Kuzco instead ingests a potion that transforms him into a llama. He ends up in the company of the llama herder Pacha but Pacha distrusts him because Kuzco had earlier announced he would demolish Pacha’s village to build a swimming pool. A reluctant friendship grows between the two, with Kuzco having to learn more humble ways to get Pacha’s help in returning to human form. All the while, they must avoid Yzma’s attempts to kill Kuzco.

There was something about this animated feature from Disney that seemed weak. The basic idea of The Emperor’s New Groove – a man transformed into a llama – seemed conceptually lacking in comparison to the epic scope of some of their other animated films. And then there was the title – something that has little relevance to the finished film, in fact is never actually explained (the emperor’s groove is supposed to be his dance and rhythm, but while we find out what the old one is we never learn what the new one is). The Emperor’s New Groove seems to epitomize the irritably flip pandering to contemporary mores and culture that has infected much of the modern Disney.

Despite presentiments to the contrary, The Emperor’s New Groove is undeniably likable. It is not great Disney – it is not even trying to be – and indeed the very lack of the epic pretensions that have infected too many Disney animated films of the 1990s actually helps it. In an odd thematic coincidence, The Emperor’s New Groove draws on the same Aztec background as DreamWorks’ The Road to El Dorado (2000) released earlier in the year. Here, the cultural background has even less relevance and less historical accuracy as it did in The Road to El Dorado, although does at least make for some eye-popping designs.

Like a number of Disney films from the same period – Aladdin (1992) and Hercules (1997) being the most guilty offenders – The Emperor’s New Groove wilfully punctures the envelope of realism by throwing in contemporary culture references and jokes – Aztec boy scouts and fast food restaurants, references to downsizing and parking validation – as well as puncturing the meta-fictional balloon – having the lead character stop the film to draw diagrams for the audience and calling for the camera to come back to him as it tracks off to focus on cute animals.

What must be said though is that this actually proves – maybe for the first time – engaging. The story is a familiar but effectively told one of the arrogant – albeit endearingly arrogant – youth who learns to become a decent person. There is a likable cast of supporting characters, most appealing being Patrick Warburton’s muscle-headed sidekick, which defies stereotyping to become the most engaging character on screen.

If nothing else, The Emperor’s New Groove is directed with a great deal of energy by former Disney effects animator Mark Dindal – notably Kuzco and Pacha’s back-to-back climb up the rock flue while being menaced by crocodiles, scorpions and bats all at once. The scenes in the fast food restaurant have a great deal of comic vigour and the climactic scenes with the heroes and villainness struggling to catch the vial around the outside of a temple, with the hero transforming into whales and parrots, while being pursued by a menagerie of animal-transformed guards, achieves a peculiarly dizzying level of surreal lunacy.