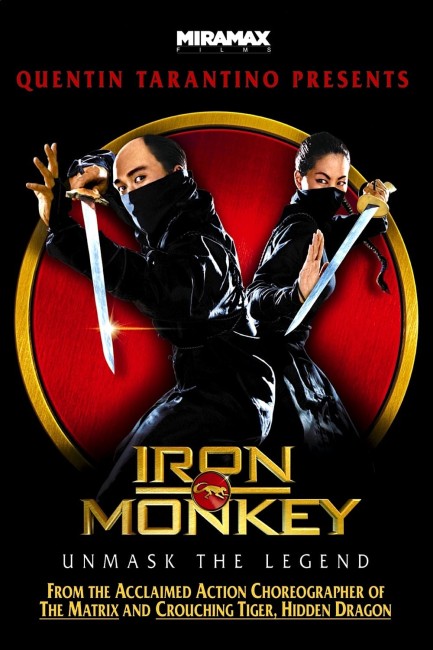 1868 in Chekiang, China. The town is ruled by a corrupt governor but Iron Monkey, a masked fighter of great skill, keeps stealing the governor’s money and redistributing it to the poor. In reality, Iron Monkey is the respected Dr Yang who sometimes operates with the help of his assistant Miss Orchid. The governor conducts a crackdown, arresting anybody who shows any kung fu skill or is even associated with monkeys. Arrested in the midst of the purge is the herbalist Wong Kei-ying and his son Fei-hong. When Iron Monkey raids the governor’s precinct, Wong Kei-ying stands up to fight him, demonstrating equal skill. Afterwards, the governor says he will free Kei-ying to capture Iron Monkey but will keep his son a prisoner to ensure that he does. Penniless and refused food by any of the townspeople because he is trying to stop their folk hero, Wong Kei-ying is then aided by Dr Yang, unaware that his new friend is the very person he is supposed to apprehend.

Yuen Wo Ping suddenly became a name known in the West for his choreography of the fight sequences in The Matrix (1999). Less known to the majority of people was Yuen’s long career as an action choreographer and stunt coordinator in Hong Kong cinema since the heyday of the Shaw Brothers in the 1970s on films that include Once Upon a Time in China (1991) and sequels, The Twin Dragons (1992), Fist of Legend (1994) and Black Mask (1996). There were also occasions when Yuen Wo Ping had stepped into the director’s chair with the likes of Snake in the Eagle’s Shadow (1976), Legend of a Fighter (1982), The Miracle Fighters (1982), Dragons vs Vampires (1986), The Tai Chi Master (1993), Tiger Cage (1988), Crouching Tiger, Hidden Dragon: Sword of Destiny (2016), The Thousand Faces of Dunjia (2017) and in particular the hit of Drunken Master (1978), which made Jackie Chan’s reputation.

From the late 1990s, Yuen was in demand by Western directors as an action choreographer on works like Lethal Weapon 4 (1998), the Kill Bill films, Unleashed (2005), The Forbidden Kingdom (2008) and high-profile Chinese-language works such as Crouching Tiger, Hidden Dragon (2000), Kung Fu Hustle (2004), Fearless (2006), Legend of the Black Scorpion (2006), True Legend (2010) and The Grandmaster (2013). In 2002, Iron Monkey was given a newly subtitled re-release in the West, along with a new score, to take advantage of the popularity of Yuen Wo Ping’s name and in an attempt to market the film in the wake of the success of Crouching Tiger, Hidden Dragon.

With Iron Monkey, Yuen Wo Ping is working under the producership of the legendary Tsui Hark, director of classic films like Zu: Warriors from the Magic Mountain (1983) and Green Snake (1993). Unlike Tsui Hark’s work, Yuen Wo Ping’s films are generally less fantastical. Opponents still conduct impossible mid-air manoeuvres, however his films are earthbound in the sense that he keeps them as purely martial arts combat films rather than incorporates elements such as magic, Eastern religion and combat with demons or outrightly absurdist moves such as characters dancing on swords, uprooting and throwing trees and so forth that we had in a substantial number of other Wu Xia films of the period.

Iron Monkey is essentially a Wu Xia variation on Robin Hood – by way of a Western masked hero such as Batman, Zorro or The Lone Ranger. In terms of plot, the film is fairly simplistic in the character divides it sketches – the good wisely doctor, the comically evil and corrupt figures of the governor and royal minister – where the major story arc is the complication that ensues when straight arrow Donnie Yen ends up befriended by Yu Rong Guang not realising that he is the masked figure he has sworn to apprehend.

The pleasure of the film all comes in the martial combat sequences that Yuen Wo Ping stages. Scenes with Donnie Yen and son Tsang Sze Man despatching a host of opponents with an umbrella; the initial fight between Yu Rong Guan and Donnie Yen on a rooftop, full of lightning fast moves. There is a glorious piece early in the show with Yu Rong Guang and Jean Wang jumping off the walls, flipping through the air, kicking stools into place and so on in order to catch pieces of falling paper, which shows exactly what kind of poetry the genre can conduct when it gets the chance.

The standout set-piece of the film is the climactic showcapper with Yu Rong Guan and Donnie Yen fighting Yen Yee Kwan around a series of burning pillars with they balanced atop posts, atop one another, teetering as posts are in mid collapse and so on, which proves so entertaining in the constant cleverness of its dexterity that it is almost exhausting.

Yuen Wo Ping peppers the rest of the film with the broad, goofy slapstick sequences that Hong Kong cinema seems to love but beyond that there is never too much more to Iron Monkey. Which is probably why I enjoyed his The Tai Chi Master and its epic-sized fight scenes the better of the two. Not that Iron Monkey is anything less than highly enjoyable for exactly what it offers.

Donnie Yen but not Yuen Wo Ping returned for the sequel Iron Monkey 2 (1996) where this time he inherited the role of Iron Monkey.