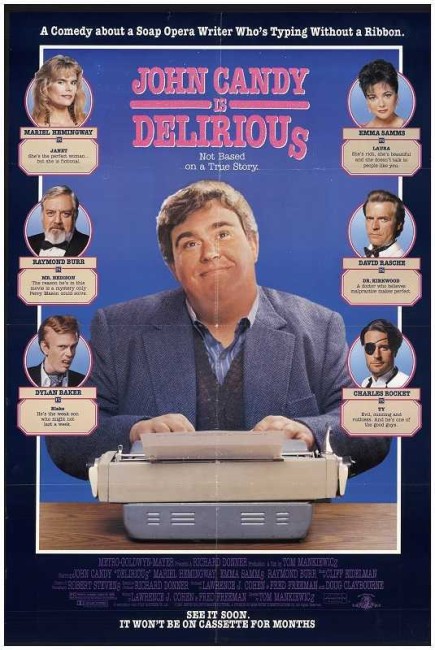 Jack Gable, the writer of the soap opera ‘Beyond Our Dreams’, is not happy with changes that the producers are intending to make to the show – especially their plans to kill off the character of Rachel Hedison, played by Laura Clayborne whom Jack has a crush on. Jack is ecstatic when Laura asks to come on a trip to Vermont with him. However, at the last minute, she reconciles with her boyfriend and cancels. Jack drives to Vermont alone, only for his car to crash. He comes around in hospital surrounded by the actors from the tv show. He realises that they are not the actors but the characters from the series and that he has somehow strayed into the show’s fictional world. They believe that he is a Wall Street tycoon. Jack then realizes that Rachel is about to go for the fatal horse ride that will kill her character off and quickly picks up a typewriter and writes himself in as her rescuer. However, as he tries to romance her, she turns out to be a scheming bitch. At the same time, he becomes attracted to a new character on the show Janet Dubois – but then the producers start introducing twists that make Janet much less pleasant.

Hollywood filmmaking tends to run in peculiar fads. When everyone senses a hit on the horizon suddenly every filmmaker crowds around a theme – be it disaster movies, dinosaur movies or virtual reality films – although the fad is usually one that is just as quickly gone by the following year. Delirious was one of a spate of soap operas overrunning reality films that came out in 1990-1, a fad that also included the likes of Aunt Julia and the Scriptwriter (1990) and Soapdish (1991), although Delirious was the only one of these that entered into outright fantasy. Delirious was also the least successful of the three films.

Delirious was directed by Tom Mankiewicz, the son of Joseph L. Mankiewicz, a veteran filmmaker who was responsible for classics like The Ghost and Mrs Muir (1947), All About Eve (1950), Suddenly Last Summer (1959), Cleopatra (1963) and Sleuth (1972). Tom Mankiewicz is probably better known as a screenwriter than as a director. He wrote three of the James Bond films – Diamonds Are Forever (1971), Live and Let Die (1973) and The Man with the Golden Gun (1974) – and a number of other high-profile films including Mother, Jugs and Speed (1974), The Eagle Has Landed (1976), The Cassandra Crossing (1976) and Ladyhawke (1985) and is also a well-known script doctor, in particular being listed as a ‘creative consultant’ on Superman (1978).

Far less successful have been Tom Mankiewicz’s outings behind the director’s chair, which have all fallen far below the level of his esteemed father. His first directorial outing was Dragnet (1987), the spoof/big-screen remake of the 1950s tv crime show, and can be considered the only success he has had. Delirious was a flop, while his next film, the comedy Taking the Heat (1993), was released directly to tv and he has since only directed Hart and Hart tv movies before his death in 2010.

A film like Delirious needs to derive its comedy from the differences between reality and fiction, not merely conform to its conventions. Some films in this genre of reality/film crossover meta-fictions conduct the differences with hysterical effect – see the likes of The Purple Rose of Cairo (1985), Who Framed Roger Rabbit? (1988), The Icicle Thief (1989), Last Action Hero (1993) and in particular Pleasantville (1998), which conducted the trapped in a tv show theme with a much greater degree of imagination. (For more detail see Meta-Fiction Films).

Delirious falls down in that its ‘real world’ and its fictional realities are too similar. The film’s reality has the same super-bitch and good girl that the fictional one does and there seem no differences between the characters and the actresses supposedly playing them. Similarly, the happy ending Delirious arrives at is far too rooted in the convention that the film wants to parody. There is the odd moment of amusement like the party where John Candy starts encountering the typos he wrote in the script while drunk – “The bartender needs more cold deer.”

Tom Mankiewicz directs with an uninspired slapstick tone – the film’s silliest moment is surely the sequence with Emma Samms driving a car at high-speed while blindfolded. There is so much about soap opera that a film like this could have parodied but Mankiewicz misses his target by a mile.