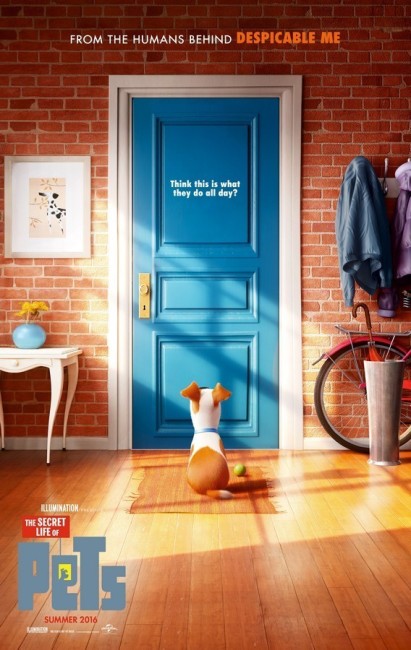 Max is a Jack Russell terrier who lives a happy life with his owner Katie in her apartment in New York City. His life is turned upside down when Katie brings home a new dog Duke. Max resents the intrusion of Duke’s large, ungainly ways into the household and contrives to sabotage him. While out in the park with the dog walker, they are let free only for Duke to gain the upper hand by dragging Max away on his leash. They are captured by the pound but are freed by The Flushed Pets, a revolutionary movement who live in the sewers. With the revolutionaries believing Max and Duke to be radicals that murdered their owners, they are inducted into the organisation. Meanwhile, Gidget, the pomeranian in the neighbouring apartment who has a secret crush on Max, organises the other pets in the building to rescue him.

Illumination Entertainment made an impressive debut with the charming and delightful Despicable Me (2010). This announced them as a major new player on the animation scene. Disappointingly thereafter they slipped into just doing the same thing that every other animation studio is doing, turning out a string of films that milked Despicable Me and the Minions for everything they could with Despicable Me 2 (2013), Minions (2015) and Despicable Me 3 (2017). The rest of the time they delivered formulaic efforts such as Hop (2011), a mix of live-action and animation, and the Dr Seuss adaptation The Lorax (2012). Subsequent to this they made the modest Sing (2016) and another Dr Seuss adaptation The Grinch (2018). It is for this reason that I failed to find the enthusiasm to see The Secret Life of Pets in theatres and waited until a copy became available. Certainly, The Secret Life of Pets became Illumination’s third highest grossing film and their biggest grossing original, non-sequel film.

I suppose my lack of enthusiasm about seeing The Secret Life of Pets theatrically was due to the overall ennui I feel these days about how formulaic and tedious most mainstream animation has become. I have to say I was pleasantly surprised by the fllm. The central premise of the ‘secret lives of pets’ is a winning one. It is summed up perfectly in the film’s trailer with images of a very proper poodle switching on head-banging music as soon as its owner leaves or with the animals holding parties sniffing each other’s butts.

The film gets a good deal of amusement out of the contrast between scenes of the animals talking amongst themselves and then cutting to the human reactions to this. The film becomes slightly less interesting when it strays away from this central concept – in particular, when it tries to add drama to the mix and introduce a group of animal revolutionaries. Things get much sillier when we get to animals dressed in drag – reminiscent of the scene in Shaun the Sheep Movie (2015) – and hijacking a bus to conduct a rescue attempt.

There is nothing that The Secret Life of Pets does that is a radical change over most other animated films. The journey between rivals that slowly merges into friendship over its course is a tried and true one. The animal underground scenes remind somewhat of Flushed Away (2006), while the climactic rescue attempt with the various pets hijacking a bus to rescue their number has much in common with the more wittily accomplished sequence in Finding Dory (2016) earlier in the year. The idea of the pampered dog and its observations on the other pets and human owners around him takes more than a few leaves from Garfield, although Louis C.K.’s voicing makes the character of Max more of a young innocent in the world than the lazy sarcasm of Garfield.

All of that said, the beats that The Secret Life of Pets hits are engagingly well done. The characters are endearingly likeable with much of the show being stolen by Jenny Slate as the pomeranian who has an unspoken crush on Max and leads the rescue attempt, arriving at a kickass scene where she unleashes her fury, and from Kevin Hart as the bunny revolutionary leader (who gets an absolutely perfect ending). It is a film not without its moments of sheer dementia like the scene where Max and Duke break into a factory and conduct their own version of Sausage Party (2016), albeit in a more family-friendly way.