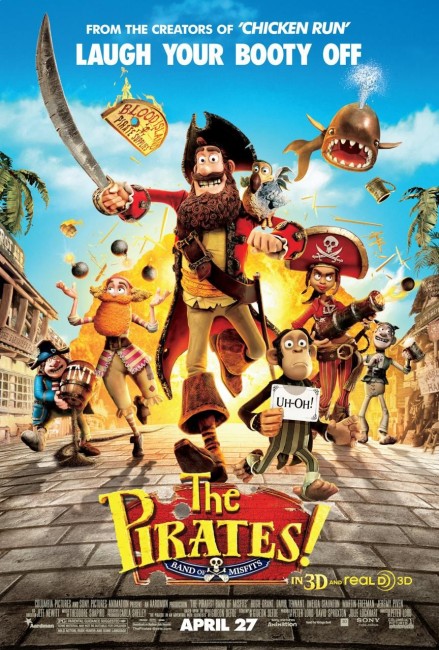 aka The Pirates! In an Adventure With Scientists

The Pirate Captain leads a crew of not very successful pirates. For the last twenty years, they have failed to win the Pirate of the Year Award. He and his crew arrive at Blood Island for this year’s award but the Pirate Captain feels ridiculed up against some of his competitors. He leaves determined to prove himself. After a string of forays that end up empty-handed, they raid the ship of Charles Darwin. Darwin identifies the pirate’s parrot Polly as a dodo, which is believed to be extinct. Darwin persuades them to enter Polly in the Scientist of the Year Award and the Pirate Captain becomes excited the about the possibility of winning the prize money. The pirates head to London, disguising themselves as scientists to avoid Queen Victoria who has a hatred of all pirates. While staying at Charles Darwin’s house, they suspect Darwin and his chimpanzee Mr Bobo of trying to steal Polly. They enter the competition and win, only to be exposed as pirates. Queen Victoria offers The Pirate Captain a pardon and a great deal of treasure if he will donate Polly to her petting zoo. The Pirate Captain agrees and returns with the treasure to win the Pirate of the Year Award. However, this is stripped from him when his rivals reveal that he has been pardoned by Queen Victoria. Feeling bad about having sold the ship’s beloved pet, The Pirate Captain returns to retrieve Polly. He then discovers that Queen Victoria’s real purpose in acquiring Polly has been to use her as the main course at a meeting of international heads of state who dine upon rare and endangered animals.

The Pirates! Band of Misfits was the fifth feature-length film from England’s Aardman Animations. Aardman was founded in 1976 by Peter Lord and David Sproxton. They gained a name in the 1980s with their delightful Claymation animated works, including the Wallace and Gromit shorts A Grand Day Out (1989), The Wrong Trousers (1993) and A Close Shave (1995), and other works like Creature Comforts (1990) and Shaun the Sheep (2007– ). Aardman expanded out onto cinema screens in the 00s with the feature-length films Chicken Run (2000) and Wallace & Gromit in The Curse of the Were-Rabbit (2005). Starting with Flushed Away (2006) and continuing with Arthur Christmas (2011), Aardman sacrificed Claymation for standard less time-consuming computer-drawn animation. The Pirates! Band of Misfits is a mixture of both Aardman’s staple Claymation and CGI animation, courtesy of their partnership with Sony Pictures Animation, the makers of Open Season (2006), Surf’s Up (2007), Cloudy With a Chance of Meatballs (2009), Hotel Transylvania (2012), The Emoji Movie (2017), Peter Rabbit (2018), The Mitchells vs the Machines (2021), Vivo (2021) and Wish Dragon (2021). They did subsequently make a return to Claymation with Shaun the Sheep Movie (2015), Early Man (2018) and Farmageddon (2019).

The Pirates! Band of Misfits is based on The Pirates! In an Adventure With Scientists (2004) by Gideon Defoe. Defoe has written four other books in The Pirates! series, which take his pirate crew – known only as The Pirate Captain, The Pirate With a Scarf, The Pirate with Gout and so on, up against other 19th Century historical and fictional characters, including Karl Marx, Napoleon Bonaparte and Captain Ahab of Moby Dick (1856) fame. Gideon Defoe also writes the screenplay for the film.

One of the more amusing aspects of the film is seeing some of the interpolations that Gideon Defoe and the Aardman people do with traditional imagery of the pirate. The idea of an inept crew of pirates trying to compete in the Pirate of the Year awards holds some amusement to it. Particularly appealing are the scenes of the pirates trying to disguise themselves as scientists. Some of the film does head towards the direction of slapstick hijinks – notably a sequence with the pirate crew careening through Charles Darwin’s house and out into the streets in a bathtub, or the climactic scenes fighting around the kitchen with a maddened Queen Victoria – but these are conducted with great gusto.

The film also winds in several real historical figures, even if the portraits would surely make any historian do a double-take. You suspect for a time that maybe the film has a closeted fundamentalist agenda in seeking to portray Charles Darwin as a villain (although he does get a redemption at the end), while the film’s portrait of Queen Victoria as an autocratic tyrant, arranging banquets of rare and endangered animals and going into action waving a sword is something that could well be considered libellous by members of the Windsor family. There are some cute cameos packed away, including the sight of Jane Austen and John Merrick, alias The Elephant Man, going on a date at one point (even if in reality, Merrick was not born until fifty years after Austen’s death).

The plot wheels around with entertaining absurdity and the background of the film is packed with an enormous number of sly throwaway gags. The film never quite hits the deliriously madcap heights of some of Aardman’s Claymation works but will do perfectly well for the moment and makes welcome distraction from the blandness of other animated product out there. The characters come with the quirky wit that is distinctive of Aardman’s films. All of the respective name actors seem to have a ball with their parts and come across with considerable appeal, even if the supporting parts of the scurvy crew never get much screen time.

The animation is of suitable quality but this is a problem that I had with The Pirates! – namely that because Aardman have taken to conducting their films in hand-drawn animation, the distinctive characteristics of their stop-motion animation disappear so that The Pirates! looks like just another animated film. In fact, until the end credits came up, I assumed because of the Sony Pictures Animation name on the opening credits that Aardman were simply using standard computer animation as in Flushed Away and Arthur Christmas rather than that they had blended both hand-drawn and stop-motion animation.