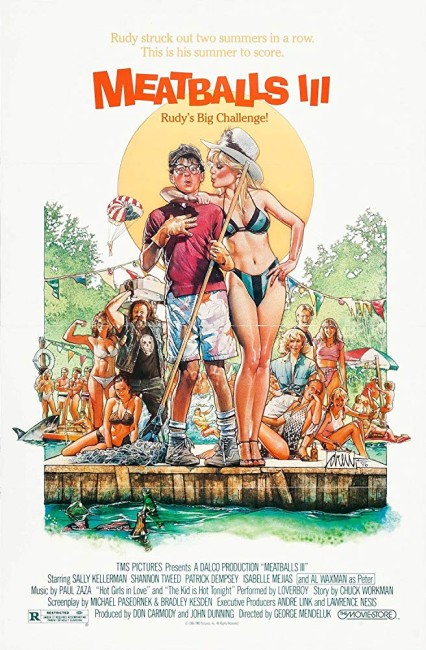 The nerdish teenager Rudy goes to take up his regular holiday job as an attendant at his old friend’s gas station at a marina on a lakeshore where students party over the summer. Upon arriving, Rudy finds that the biker Mean Gene has bought the gas station out. Mean Gene also has a reputedly nymphomaniac wife, who has been nicknamed The Love Goddess by the jocks, that he keeps in the top turret of his house. The Love Goddess’s reputation has become such that the jocks make bets as to how far into the house a novice can get before he is found by Mean Gene and tossed out the window. Rudy has an incredible string of bad luck trying to make out with girls. Meanwhile, famous porn movie actress Roxanne de Jour dies. However, St Peter refuses Roxanne entrance to Heaven until she does a good deed. Just then, Rudy’s wail of anguish about ever losing her virginity is heard up in Heaven. And so Roxanne decides to return to Earth as an angel, invisible to all except Rudy, and give him the help he needs to lose his virginity.

The Meatballs films and the summer camp genre was always directed at one audience niche – guys in their late teens who drink a lot of beer and ogle girls. That however does not prepare one for just how moronic Meatballs III: Summer Job is. The film serves as little more than make-out fantasy directed by a horny adolescent – it is littered with crude innuendoes, wet dream females and perpetually goggle-eyed males. The female roles border on the offensive – it seems to be required that the moment she is introduced that every woman in the film has to drop into crude come-on innuendo mode. The contempt with which the idea of a guy retaining his virginity is spoken of is extraordinary.

Patrick Dempsey, a good many years before becoming a major heartthrob on tv’s Grey’s Anatomy (2005– ), gives an annoyingly weedy performance – the character seems so stuck up in the way he regards even sleeping with some girls as beneath him that one ends taking more delight than feeling any sympathy at his ritual humiliations. Sally Kellerman, a long, long way down in her career from highs like M.A.S.H. (1970), gives an awful husky voiced, arch-eyebrowed camp reading, while Al Waxman, once the captain from tv’s Cagney & Lacey (1982-7), appears entirely embarrassed in the role of St Peter.

Canadian director George Mendeluk first appeared with Stone Cold Dead (1979) in which a detective hunts a serial killer and then made the William Shatner thriller The Kidnapping of the President (1980), before disappearing off to direct much Canadian-shot US television, although did return to genre material some years later with the zombie film Fight or Flight (2010). His one other genre works have consisted of a string of tv movies I Know What I Saw (2007), Swarm/Destination Infestation (2007) about ants on a plane, Nightmare at the End of the Hall (2008), Riddles of the Sphinx (2008), Storm Seekers (2008) and Forever 16 (2013).