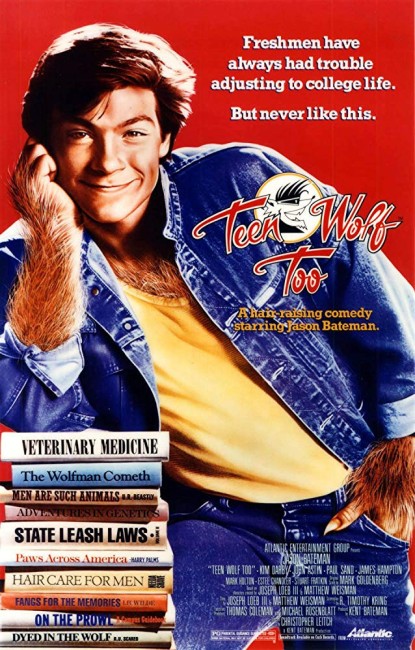 Scott Howard’s cousin Todd is sent to college on a boxing scholarship by the school’s overly ambitious sports coach, despite his having never boxed before. The bullying college dean sees through this and threatens to expel Todd if he fails to justify the scholarship. The werewolf in Todd then starts to emerge. As the wolf, he finds amazing social success. This also allows him to become the college’s champion in the ring. However, in becoming increasingly more self-assured and popular, he also isolates his closest friends.

Teen Wolf (1985) was an unexpected hit, due to it judiciously managing to come out just as Michael J. Fox hit superstardom on tv’s Family Ties (1982-9) and in Back to the Future (1985). Had Teen Wolf not had Michael J. Fox in the central role, it is more than likely that nobody would have noticed the film. The film’s success was spun off into an animated tv series Teen Wolf (1986-9) and then this sequel. Michael J. Fox is absent this time around, with the only returnee from the original being James Hampton who played Fox’s father.

The sequel emerges as a slavish copy of the original. About the only point of originality it has is where the first film had teen wolf Fox proving himself in the basketball court, this has teen wolf Jason Bateman proving himself in the boxing ring. The rest doggedly repeats the wolf-becomes-social success/sports hero themes, good girl/bad girl dilemma and the end message about relying upon one’s self rather than the wolf (which becomes laid on with a trowel).

In fact, in being reissued here, the end message of relying on the human instead of the wolf seems a decidedly hypocritical one to preach, when the film’s entire selling point remains the comedy concept of the wolf. In actuality, the wolf has been so trivialised that it would make no difference to the story whether Jason Bateman turned into a chihuahua, a beetle or a woman. All Teen Wolf Too is is a banal frat rat comedy and the wolf could easily have been taken out of the occasion with minimal difference.

Jason Bateman, the producer’s son (and two decade before he became a mainstream comedy actor), is an innocuous nobody without the necessary qualities of self-parody. Against all prediction, Bateman did manage to recoup from this and become a more than reasonable actor in various mainstream comedies in the 200s and beyond. The werewolf makeup job is so tatty no effort has been made to disguise the join lines between the appliances and Bateman’s face, while the tail that Kim Darby manifests is utterly ridiculous. (Notedly, the company/person responsible for the makeup effects has taken their name off the credits).

The original was later remade in a far more serious vein as the tv series Teen Wolf (2011-7) starring Tyler Posey in the role.

The only other genre work that director Christopher Leitch went on to make was the tv movie remake of Satan’s School for Girls (2000) and he has otherwise been a tv director.