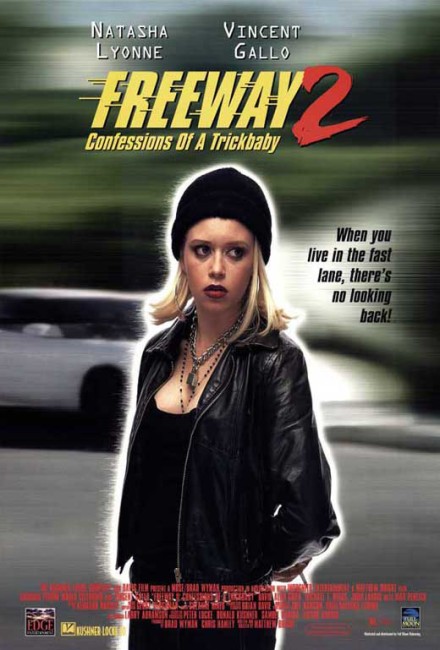 Teenager Crystal Van Metter is sentenced to juvenile hall, to be followed by an ensuing 25 year prison sentence as an adult, for dealing drugs. There she hatches an escape plan with her schizophrenic, lesbian Hispanic cellmate Cyclona. On the run, Crystal finds that Cyclona genuinely is crazy and is taking every opportunity to gleefully kill people. Leaving behind a trail of murdered geriatrics and cops, they cross the Mexican border to Tijuana where they take refuge with Cyclona’s childhood deliverer, the transsexual nun Sister Gomez. Sister Gomez promises to exorcise Cyclona from the spirit of craziness that infects her, as well as deliver Crystal from the demon that causes her bulimia. Crystal is forced to work on the streets as a hooker, robbing her tricks to pay Sister Gomez for their deliverance. Crystal then discovers that Sister Gomez is in fact a child pornographer, a snuff movie-maker and a cannibal who has intentions for the both of them.

Matthew Bright’s Freeway (1996) was an hilariously trashy modernisation of the Little Red Riding Hood story – one where Little Red Riding Hood was a gun-toting, trash-talking, juvenile delinquent; where the Big Bad Wolf was a serial killer; and Granny lived in a trailer park. Matthew Bright then returned with Freeway II: Confessions of a Trickbaby, although this is not connected to Freeway I in any way other than that it allows Bright the opportunity to exhume another fairy-tale in like manner.

The fairytale in question this time around is Hansel and Gretel. Of course, in Matthew Bright’s unique outlook, this is a version where Hansel and Gretel are two female escapees from juvenile hall on the run across the Mexican border (who naturally get to engage in a lesbian sex scene); where instead of laying a trail of bread crumbs they lay a trail of crack crystals; and instead of a witch who wants to cook the children, we get an overacting Vincent Gallo as a drag nun who is a cannibal/child molester/snuff-movie maker. Everywhere else, Matthew Bright throws in hilariously trashy effects – everything from juvenile armed robbery and cop shooting, to bulimia purging parties, projectile vomiting, clients jerking their lawyers off while waiting for their court session, and teens driving cross-country in a stolen car while under the influence of beer and inhaled paint fumes.

Freeway II: Confessions of a Trickbaby is also a considerably better film than Freeway. Matthew Bright juggles essentially the same elements but coheses them into a much more character-driven story. Natasha Lyonne (who also takes an associate producer role) is good as the bulimic, armed-robbing, crack-dealing lead, but the show is stolen by Maria Celedonio as her schizophrenic, lesbian grrl, serial killer cohort on the road. Celdonio’s performance is frequently hysterical, especially her frequent come-ons to Lyonne: “Can I eat your pussy? Can I shoot you up? Shooting girls up makes me hot.”

To fully appreciate what Matthew Bright is doing here, you should contrast Freeway II: Confessions of a Trickbaby with any other serial killer movie – even the first Freeway. Such a scene with Maria Celedonio riding two corpses would probably be intended as a big shock moment in any other film. However, in Matthew Bright’s inversion of values, the very next scene becomes the other girl’s moment of defining responsibility. Rather than a film about the hunt for a serial killer, Freeway II becomes a film about two friends on the run where Natasha Lyonne’s plight is how to keep her deranged (but not at all unsympathetic) friend’s impulses under check. The moral inversions and divides that Bright creates here are intensely captivating.

This is a superb film. The ending alone is remarkably audacious in its surprise tying together of the various strands throughout the film. Freeway II: Confessions of a Trickbaby is a daring, fiercely original work that heralds the emergence of Matthew Bright as a major new talent.

The same year offered another intriguing variation of the Hansel and Gretel story in Francois Ozon’s Criminal Lovers (1999).

Matthew Bright next went onto to direct the equally impressive Ted Bundy (2002), a biography of the notorious serial killer. Elsewhere, he has written the scripts for several Richard Elfman films, Forbidden Zone (1982), Shrunken Heads (1994) and Modern Vampires (1998), plus Dark Angel: The Ascent (1994).

(Winner in this site’s Top 10 Films of 1999 list. Winner for Best Supporting Actress (Maria Celedonio) at this site’s Best of 1999 Awards).