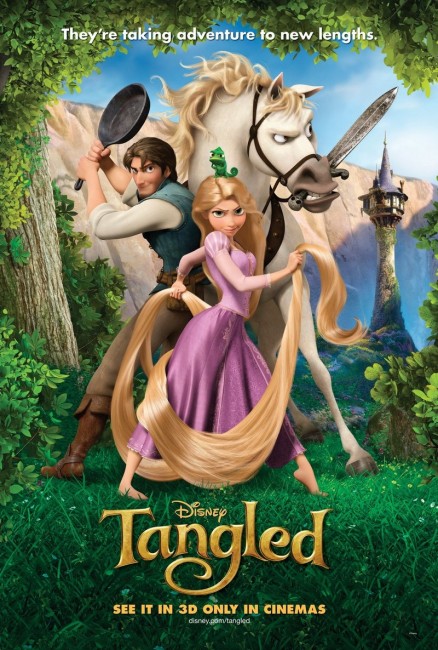 The queen of the kingdom falls ill and a search goes out for the magical flower that can save her life. The flower is jealously guarded and hidden by the witch Mother Gothel because it has the power to rejuvenate her when she sings over it. However, the flower’s hiding place is found and it is taken back to the queen and dissolved to restore her health. The queen gives birth to a daughter Rapunzel whose hair has the same magical golden glow that the flower did. Mother Gothel then sneaks in and abducts Rapunzel, making her a prisoner in a tower in the wilderness. As she grows up there, Gothel tells Rapunzel that she is her mother so that she can continue to use the magic properties in Rapunzel’s hair. Rapunzel is about to turn eighteen. She longs to be able to trace the source of the magic lights that she sees in the sky every birthday, which are in fact magic lanterns set adrift on the breeze by her parents in her memory. The thief Flynn Rider steals Rapunzel’s tiara from the palace. Double-crossing his comrades, Flynn flees and hides in the tower, only to be knocked out and made prisoner by Rapunzel. She frees him on the agreement that he takes her to see the source of the magic lanterns. They set out, discovering a gradual attraction through their various escapades. Meanwhile, Mother Gothel joins forces with Flynn’s betrayed compatriots to stop them and recapture Rapunzel.

Tangled held the distinction of being the 50th animated feature-film released by Disney. It is a milestone you wish that Disney had made more of than the results you see up on screen. Disney animation goes in cycles of boom and wane. The classic years 1937-42 where the studio made their name nosedived in the late 1940s; the studio recaptured that during the 1950s but from Walt Disney’s death in 1966, it was a two-decade lull of mediocrity before the studio regained their form in the 1990s. Even that boom had died by 2000 with a string of flops or head-scratchingly ill-conceived never-rans like The Emperor’s New Groove (2000), Atlantis, The Lost Empire (2001), Treasure Planet (2002), Brother Bear (2003), Home on the Range (2004) and Chicken Little (2005). The studio showed renewed promise with the appointment of Pixar CEO John Lasseter as head of animation in 2006, which began to produce the much more worthwhile likes of Bolt (2008), The Princess and the Frog (2009), Wreck-It Ralph (2012) and Zootopia (2016).

Tangled was pitched as Disney’s revisiting of their classic fairytale tradition – see the likes of Snow White and the Seven Dwarfs (1937), Cinderella (1950), Sleeping Beauty (1959). In truth, that is exactly what Tangled is not – or at least, it is a deceptive claim. Rather than the Disney classics, which always play the fairytale elements straight, Tangled falls more into the tradition of modern films like Shrek (2001) and Disney’s own Enchanted (2007), which relentlessly deconstruct and poke fun at classic fairytales or modernise/rewrite them in contemporary terms and language.

To its credit, Tangled is not as grating in its persistent need to be hip and modernistic as some of the other films that have come out amidst this fad such as Ella Enchanted (2004), Hoodwinked! (2005) and Happily N’Ever After (2006), although it is still anything but a standard reading of Rapunzel (which was first written down by the Brothers Grimm in 1812).

After Disney scaled some amazing heights during the previous decade-and-a-half, the quality of animation in Tangled comes as disappointingly average. The film was also released in the exasperatingly ubiquitous 3D process like almost any animated film that has come out since 2010. Disney also return to the tradition of including songs, which have been phased out of their films for the better part of a decade now – to this extent, the film even casts the lead role with pop singer Mandy Moore. None of the numbers are particularly memorable – you get the feeling that they were inserted more with an eye towards creating an ensuing Broadway musical as has happened with a number of Disney animated films in recent years.

Tangled feels awkward and conceptually uneasy. The fairytale has been sufficiently changed and the elements expanded out so that now all we have is an adventure story about a handsome rogue and a girl with magical hair. There is not much more to Tangled than that. There is the sense that the film is trying to compensate for the thinness of the plot in other areas – needlessly pumping up action sequences like the collapse of the water irrigation pipes in a mini-tsunami. There is a moderately lovely scene where Rapunzel and Flynn arrive at the lantern festival and watch hundreds of lit lanterns take off into the sky.

One of the more amusing things is watching Rapunzel’s all-purpose hair, which she uses as everything from a rope to tie Flynn up to swing around the tower with to light the way in the dark, while it also has vague magical properties that Mother Gothel needs to rejuvenate her age.

The film’s plus is the relationship between Rapunzel and Flynn. Expectedly, she is played as a modern girl and characterised with a feisty headstrong determination. There is an appealingly natural sense of humour to their relationship. Everything ends with a predictable happy ever after ending – the witch is killed, the heroine discovers she was a princess all along, even the thuggish heavies get to find their self-fulfilment. It is a competent run through of the Disney formula but alas is only Disney Lite.

The film was later spun out as a tv series Tangled: The Series (2017- ). Rapunzel later makes an appearance in Ralph Breaks the Internet (2018).

Byron Howard had previously co-directed the Disney film Bolt (2008) and went onto co-direct Zootopia (2016). Nathan Greno has yet to make another film.