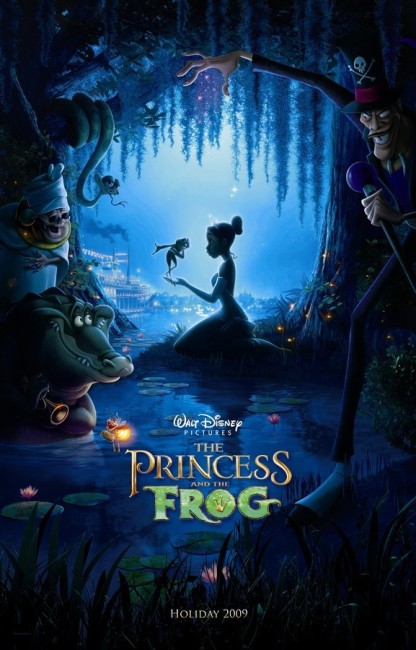 Tiana grows up as a young girl in New Orleans in the 1920s. As an adult, it is Tiana’s greatest dream to start her own restaurant. To this end she works long hours as a waitress and saves all her money. It is then announced that Prince Naveen of Maldonia is coming to town. Charlotte, Tiana’s best friend since childhood and whose father owns much of the city, dreams of snaring the prince as a husband and puts on a ball for his benefit. Tiana finally gets all the money she needs to start her restaurant when Charlotte hires her to cater for the ball. What they do not know is that the playboy Naveen has been cut off from his inheritance by his parents. The ball goes ahead but as Tiana dresses, she encounters a frog that talks to her. It explains to her that it is the real Naveen, not the one wooing Charlotte. Naveen tells how he was fooled by the voodoo houngan Dr Facilier who transformed him into a frog and then magically changed his manservant Lawrence into the likeness of Naveen. Naveen asks Tiana for a kiss to transform him back. Tiana reluctantly agrees, but upon kissing Naveen she is instead transformed into a frog too. Forced to flee, they realise that this has happened because the rules require that he must be kissed by a princess in order to be transformed back. They are forced to flee the ball and head into the swamps. Aided by various swampland animals, they set out to find the voodoo priestess Mama Odie to return to their human forms and foil Facilier before he has the transformed Lawrence marry Charlotte.

For all its pedigree as the name in animation, Disney Studios’ animated output oscillates between cycles of hit and misses, largely depending on who is running the outfit. The studio’s animation department slumped considerably between Walt Disney’s death in 1966 and the 1990s, during which period the studio was releasing approximately only one animated film every three years. This turned around with the massive successes of the Academy Award nominated Beauty and the Beast (1991), which heralded a new Disney renaissance that produced hits like Aladdin (1992), The Lion King (1994), Pocahontas (1995), The Hunchback of Notre Dame (1996), Mulan (1998) and Tarzan (1999). This brought the Disney name back to box-office prominence and the studio has now been producing one animated film every year most years since 1991.

Beneath this comeback story, there were rumblings in the House of the Mouse. Since the late 1990s, there was growing unhappiness with the leadership of the much hated Disney CEO Michael Eisner. While the studio was having a number of high-profile animated hits, elsewhere Eisner was creatively ransacking Disney’s heritage in a series of video/dvd released sequels to almost all of their animated classics, which were cheaply produced at overseas animation houses.

During the latter half of the 2000s, the studio’s animation department was plagued by series of commercial flops – notably Atlantis: The Lost Empire (2001), Treasure Planet (2002) and Home on the Range (2004) – and other box-office non-hits that ended up making you scratch your head wondering if the Disney greenlight board were not all doing drugs – The Emperor’s New Groove (2000), an Aztec-themed animated film premised around a man turned into a llama; Brother Bear (2003) wherein an Inuit warrior is transformed into a grizzly bear; Home on the Range, an animated film about talking cattle; Chicken Little (2005), an animated fairytale with talking animals that bizarrely morphed into an alien invasion film. Were it not for the constant charms produced by Disney’s partner Pixar, the studio’s animation output during this period would have been entirely negligible.

The degree of discord grew until the public ousting of Michael Eisner in 2005. One of the first tasks of new CEO Robert Iger was to appoint Pixar head John Lasseter as Chief Creative Officer of the studio’s animation department (at least up until Lasseter’s ousting over sexual harassment allegations in 2017). The change is immediately apparent in the films that have emerged since Lasseter’s appointment with the previous Bolt (2008) being one of the most enjoyable Disney films this side of the 00s. This appears to be continuing with The Princess and the Frog here. One of Lasseter’s decisions was to reopen the hand-drawn animation department that Eisner had closed down in 2004, citing it as no longer being productive in the era of computer animation, and The Princess and the Frog is the first film to emerge drawn by hand since the turnabout of this decision.

I did not greet The Princess and the Frog with a high degree of expectation. This is largely because it is directed by two of my least favourite Disney directors – John Musker and Ron Clements. Musker and Clements started working together on the charming The Great Mouse Detective (1986) and followed this with the enjoyably energetic The Little Mermaid (1989), from where began the Disney renaissance of the 90s. Subsequent to that they made the hit Aladdin (1992), which unfortunately paved the way to a regrettable trend that has grown to take over much modern animation and family entertainment – fantasy and fairytale milieus being overrun by hip modern jokes, one-liners and contemporary pop culture references to the considerable detriment of suspension of disbelief. Musker and Clements’ subsequent animated films Hercules (1997), Treasure Planet (2002) and the subsequent Moana (2016) embodied this to an even greater extreme. Likewise, one only expected dire things of The Princess and the Frog and its (exceedingly loose) take on the Brothers Grimm’s The Frog Prince or Iron Heinrich (1812). Sometimes however it is pleasant to have one’s expectations surprised.

The most noticeable aspect about The Princess and the Frog is that it is the first Disney film to feature a Black heroine. On one hand, one cannot help but sit back and think – it’s fifty years since the Civil Rights movement and only now has Disney animation has gotten around to including a Black leading character! That is, unless one wants to count the infamous Song of the South (1946), which is usually regarded as one of the films that Disney would prefer to forget about. It was not until the 1980s with The Devil and Max Devlin (1981) starring Bill Cosby that Disney even made a live-action film with a Black leading character.

On the other hand, Disney animation of the mid-90s onwards has gone a long way to embracing diversity – the Native American friendly Pocahontas, the Chinese themed Mulan, Lilo & Stitch (2002) being wound in around Hawaiian culture, the Inuit in Brother Bear and Pacific Island culture in Moana. It is not just the drawing of coloured faces up on the screen but also the casting of voice actors from the particular ethnic background in the roles – even when the ethnicity of an actor in a role in an English-language animated film is surely irrelevant. So the wider perspective is less that Disney is playing equality catch-up after an embarrassingly long time as it is Disney just making yet another film in its slow movement around all of the cultural minorities within its borders.

As such, The Princess and the Frog does a fine job of embracing a culture that emerges from a particular place in time – New Orleans during the Jazz Age – and making its people, its music, the architecture, even its food, part of the texture of the film’s background. The film is not afraid to show the economic disparities that existed in the period – there is a lovely bittersweet scene at the start where Tiana takes a ride on the streetcar and the houses outside fade from lavish mansions to the downtrodden shacks of the poor. The idea that a poor Black waitress of the period could be best friends with the White daughter of the man who owns most of New Orleans does strain credibility somewhat but the film’s depiction of the background and style of the era, not to mention the vibrancy of its colour palette, is nothing short of flawless.

More importantly, Musker and Clements restrain their tendency towards going for the easy pop culture jokes, hip contemporary one-liners and fourth-wall breaking gags that took over and wrecked their suspension of disbelief of their previous films. The Princess and the Frog is a film that comes with a confident belief in itself and its milieu. After the first half hour or so with Tiana and the various happenings around New Orleans, things jump track to the story of Tiana transformed into a frog. Again, this could have been ample opportunity for Musker and Clements to go the route of having the two frogs become hip characters, making wryly ironic asides about their situation, but they choose not to go there.

The journey through the bayous becomes is something more akin to the piscine underwater frolics in The Little Mermaid. The joy of these scenes become the wacky supporting characters – a friendly crocodile named Louis with ambitions to be a trumpet player; an eccentric firefly who romantically longs for a star in the sky unaware it is not its own kind while constantly trying to restart his haphazard abdomen lantern, which sounds exactly like a lightbulb when tapped. Musker and Clements do opt for slapstick scenes – scenes with the two frogs causing chaos as they escape through the party, with Lawrence disguised as Naveen trying to propose to Charlotte as the spell wears off, a Three Stooges routine with a group of hick swampland frog hunters. These occasionally touch the inspired – like the scenes where Tiana and Naveen get their tongues entwined.

The film doesn’t get it perfect. The latter half tends to be written to easy arcs. The relationship between Tiana and Naveen is largely taken from The African Queen (1952) – the two mutually opposed and prickly personalities on a flight through the wilds who come to discover romantic attraction throughout the course of the journey. The prince also has the far-too-predictable arc of the aristocrat from the life of pampered privilege thrust into the real world for the first time. These are stories that play more by the turning of cliche than they do with real feeling. The prince and the waitress get together at the end but the sense is that that is what the dictates of the story require, more so than it is any substantial emotion generated throughout.

The Princess and the Frog reaches an ending where it almost seems about to defy the traditions of a Disney film [PLOT SPOILERS] and kill off a principal character and allow them to remain dead, and moreover that it is going to dash the prince and heroine’s chances to return to human form and leave them as frogs. Alas, despite raising these as possibilities, this proves not to be the case after all. The character dies but then it is hinted in the most shameless and sentimental way that he has gone onto an afterlife, while the two central characters are transformed back to human form by the last minute addition of a flick of the pen clause in the rules.

Tiana subsequently made a cameo appearance as one of the Disney princesses in Ralph Breaks the Internet (2018).