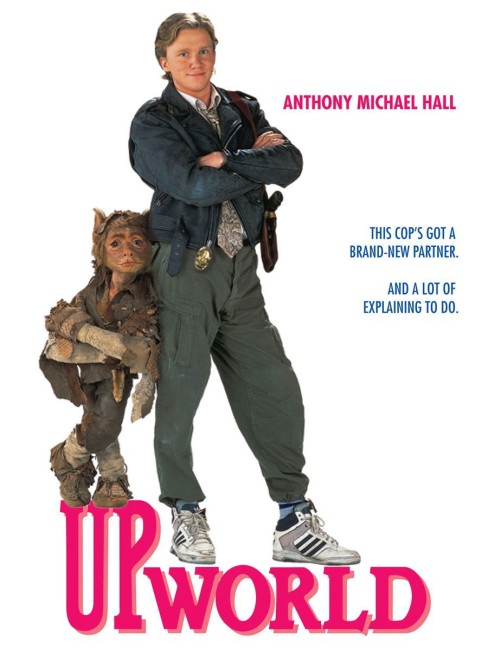 Police detective Casey Gallagher is a smartass jerk who is constantly verging on suspension for his slackness and attitude problem. He is blamed when an undercover operation to buy stolen diamonds goes wrong and the dealer is blown up. Searching for evidence to clear himself, Casey finds a shimmering crystal. A strange two-foot tall humanoid creature follows him home. Capturing the creature, Casey learns that it is a gnome named Gnorm. The crystal, known as a lumen, is used by Gnorm’s people to power their underground world, but needs to be brought to the surface by a gnome warrior every ten years to be regenerated by sunlight. The crystal is then stolen by criminals and so Casey and Gnorm must join forces to track get it back.

Upworld/A Gnome Named Gnorm was the second (and final) directorial effort from Stan Winston, better known in the industry as a makeup man on works such as Heartbeeps (1981), Edward Scissorhands (1990) and all the Terminator, Predator and Jurassic Park films. Stan Winston’s previous directorial effort was Pumpkinhead (1988), a competently directed but undistinguished supernatural horror film. Upworld sadly fails to even reach that level of competence.

For all that, it is a cute idea that fails to work. This is entirely due to a completely sophomoric attitude that takes over the film. Which is probably no particular surprise for a film that stars Anthony Michael Hall who seemed to specialise in these types of films around this period. In the film, Hall even drives a car with the number plate ‘OYNK’ – which should probably give an idea of the film’s intellectual level. Even the gnome gets into slavering over human female breasts and butts.

Anthony Michael Hall, who appears all of about nineteen, is laughably miscast as a detective and is far too young to at all convince in the part. Beyond that, the film’s most fantastic aspect is not its asking us to believe in gnomes or entire societies living underground but surely how someone with a jerkoff attitude like Anthony Michael Hall’s can remain on the police force without being suspended.

Considering the number of genre films that Stan Winston has worked on and the sterling work he has produced in the effects department on most of these, one would have thought that some of it would have rubbed off on him. At least, Winston’s team create a fairly believable gnome. However, Winston fails to light and direct it in a way that would make it look convincing. Which is a sad considering the way most makeup people complain about directors and cinematographers’ failure to show their creations in a good light.

To no particular surprise, Upworld laid about on distributor’s shelves since its completion in 1989 and was finally released to video in 1991 where it was shuffled around under various titles including A Gnome Named Gnorm and The Adventures of a Gnome Named Gnorm.