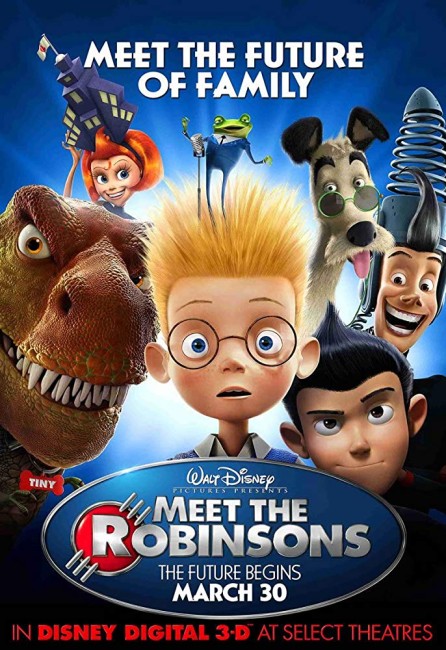 An infant is abandoned on the doorstep of an orphanage. Growing up, Louis is determined to be an inventor but the gadgets he creates are always going wrong and causing him to be rejected by prospective adopting parents. Louis determines to invent a device that will dig into his infant memories and help him find the mother that abandoned him on the doorstep who he is certain loves him. He goes to premiere his memory-retrieving device at a science fair but meets a strange kid Wilbur who warns him of a sinister guy in a bowler hat. The bowler hatted guy’s hat detaches itself and sabotages Louis’s invention during the demonstration. Louis abandons the invention as a failure, whereupon the bowler hatted guy steals it and sets out to patent it as his own – although he cannot find out how to get it started. Wilbur pleads with Louis to go back and retrieve the invention. Wilbur claims to be from the future and takes Louis there in his flying car time machine to prove it. Louis is amazed at the marvels he sees. At his family home, Wilbur does everything he can to prevent Louis from being discovered by his family, the eccentric Robinsons. Meanwhile, the bowler hatted guy makes every effort to kill Louis.

Disney animated films of the 00s were largely seen as having lost a crucial direction they once had. Disney seemed to be trying but constantly failing to find the mix of elements that made the likes of Beauty and the Beast (1991), Aladdin (1992) and The Lion King (1994) box-office smashes a decade earlier and instead ended serving up the butt ends of ideas that leave you wondering how they could possibly have gotten greenlit in the first place – examples might include The Emperor’s New Groove (2000), a gonzo effort about an Aztec prince turned into a llama; Brother Bear (2003) about an Inuit warrior reincarnated as a grizzly bear; Home on the Range (2004) about talking cattle; and Chicken Little (2005), which bizarrely attempted to combine a talking animal fairytale adaptation and an alien invasion film. These were greeted with less-than-enthusiastic response. Likewise, Meet the Robinsons opened to mostly mediocre reviews, although was the first Disney in some time to enjoy reasonable box-office success.

I must admit to entering Meet the Robinsons with zero expectations. The film’s trailer seemed to offer up an anodyne family film that applied feelgood sentiment with a trowel. A number of the early scenes play towards either by-the-numbers mawkishness or a slapstick element – especially when the literally moustache-twirling villain in black enters the scene. However, neither the trailer nor the advance word prepared one for the film that we do end up receiving. At about the point that we arrive in the future, Meet the Robinsons turns into something completely demented.

In trying to describe Meet the Robinsons, you could consider it as a variant on tv’s The Jetsons (1962-3), perhaps having been recast with a slightly older version of the juvenile inventor hero of Jimmy Neutron, Boy Genius (2001). At least, that is the description you expect going in. However, with the introduction of the Robinsons, the film becomes what can only be described as a children’s movie version of The Royal Tenenbaums (2001). In the last third, the film opens up to become almost a Back to the Future (1985) in reverse – [PLOT SPOILERS] where Back to the Future had teenager Michael J. Fox travelling back in time and having to get his parents together so that he can be born, Meet the Robinsons has young Louis travelling into the future where his own children have to get him to sort things out so that they can be born.

Indeed, there are times that Meet the Robinsons could be described as a science-fictional version of Alice in Wonderland (1865). The scenes with the Robinson family come with a tone of madcap surrealism – the mother directs a nightclub orchestra comprised of singing frogs; the sister and brother have races through the house, she in a life-sized toy train while he is fired out of a cannon; the grandfather has had his head surgically turned around backwards and leads Louis on a chase around a sculpted garden where hedges turn out to be trampolines or trapdoors; another family member talks only via a wooden hand puppet; another uncle is a superhero who works as a pizza delivery person; two heads that are said to be uncles pop up out of planters on the doorstep to argue about which doorbell to push, whereupon the door is answered by an octopoid butler.

There are nutty set-pieces like the dinnertable food fight with the brother firing meatballs and sausages down the length of the table at the sister from out of a cannon. And then there is the confrontation with the dinosaur where the family’s peculiarities all appealingly come together to help tackle the menace. It is in these scenes that the Disney animators give the impression that they have been inhaling the same substances for inspiration that they used to back in the days of Fantasia (1940) and Dumbo (1941).

The bowler hat (and the child it seemingly produces halfway through, along with an amazing array of gadgets) ends up being the scene-stealer of the show. Indeed, the bowler hat would make a wonderful nemesis for Inspector Gadget some day. Seemingly as though they cannot get the image of the tripedial alien invaders that took over Chicken Little out of their minds, the Disney animators turn the climax of the film into yet another variant on The War of the Worlds (1898) with the bowler hat and its spawn having conquered the world.

The latter scenes settle down and become more traditional minded. Even here the script is woven with a surprising degree of intelligence. The time travel element is not merely a cute mode of getting to the adventure venue but is instead wound around itself to create surprise origins about both the villain and the Robinson family. It is pleasantly unexpected to see time travel elements handled with such a degree of sophistication in what might otherwise be just a throwaway film designed for moppet audiences.

Meet the Robinsons is based on a children’s book A Day with Wilbur Robinson (1990) by William Joyce. Joyce’s books have also been adapted into the films Rise of the Guardians (2012) and Epic (2013) and the animated tv series Rolie Polie Olie (1998-2006) and George Shrinks (2000-1). Joyce also did concept artwork on early Pixar films like Toy Story (1995) and A Bug’s Life (1998), was production designer and producer of Blue Sky’s Robots (2005) and as animator for the opening credits of Mr Magorium’s Wonder Emporium (2007).