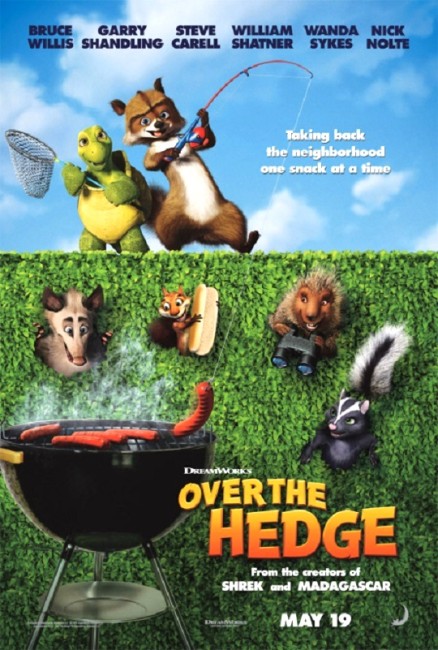 The raccoon RJ tries to steal a trolley laden with food from the bear Vincent’s cave while Vincent slumbers in hibernation. However, the plan goes disastrously wrong as RJ accidentally awakens Vincent and then loses the trolley and all the food down the cliffside where it is run over on the freeway. As Vincent prepares to kill him, RJ pleads that he can replace the food and so is granted one week – until the rising of the full moon – to do so. A group of animals led by the turtle Verne awaken from hibernation only to find a vast hedge where the woods once were. On the other side of the hedge, they find the bewildering world of a housing estate. They then encounter RJ who persuades them of the possibilities of all the food that can be foraged from human trashcans. RJ leads them on a series of daring and increasingly better-organised campaigns to snatch food out from under the human’s faces. Although this meets the disapproval of the cautious Verne, the other animals love the new adventure, unaware that RJ is using them to gather the food in order to save his skin from Vincent. At the same time, the humans respond to these incursions by hiring an exterminator.

Over the Hedge is a film that one entered with zero expectation – the trailer made it seem just another talking animals animated fantasy of which 2006 alone seemed to be overflowing with seemingly identical such films – The Ant Bully (2006), Barnyard (2006), Flushed Away (2006), Happy Feet (2006), Ice Age 2 (2006), Open Season (2006), The Wild (2006) – and came out pleasantly surprised. Over the Hedge is adapted from a syndicated newspaper cartoon-strip created by Michael Fry and T. Lewis, which first appeared in 1995. The strip features the various characters that appear in the film as they wryly observe suburban human life.

The film version of Over the Hedge is co-directed by Tim Johnson, the co-director of DreamWorks’ Antz, Sinbad: Legend of the Seven Seas and Home, and by Karey Kirkpatrick, who makes his directorial debut, having previously written screenplays for films like The Rescuers Down Under (1990), James and the Giant Peach (1996), Honey, We Shrunk Ourselves (1997), Chicken Run (2000), The Little Vampire (2000), The Hitchhiker’s Guide to the Galaxy (2005), Charlotte’s Web (2006), The Spiderwick Chronicles (2008), the English-language version of From Up on Poppy Hill (2011) and The Smurfs 2 (2013). Kirkpatrick subsequently went onto direct the live-action fantasy Imagine That (2009) and the animated Smallfoot (2018).

Over the Hedge‘s winning point is the likeability of the central characters. Bruce Willis is RJ, who has the familiar character arc of the artful dodger who comes to learn the virtue of honesty and decency, while Garry Shandling is the cautious Verne who has an equally familiar arc of the cautiously conservative character who gives warnings about the cocky newcomer that are not heeded and eventually learns to loosen up. (In many ways, the characters of RJ and Verne mirror Woody and Buzz Lightyear in Toy Story (1995) – the cocky charismatic figure who is adored by the plebs and the usurped leader who is resenting the newcomer and voicing warnings all along the way).

One thing about Over the Hedge is its eye-opening voice cast – all the way from Nick Nolte (who naturally plays the gruff bear) to teen pop idol Avril Lavigne as the possum’s daughter and Iranian stand-up comic Omid Djalili who is cast for some reason as a French-accented cat. And then there is genre legend William Shatner who still manages to give a hammy performance even when cast as an animated possum.

The film replaces the comic-strip’s wry observations on human culture with these character arcs and the animals’ associated adventures. There is some of the strip’s satire during RJ’s tour of the suburban development where he sees everything that the humans do in terms of food, but otherwise the film is largely a caper comedy. On the minus side, Johnson and Kirkpatrick play up the slapstick angle to what often feels like a frenetic level – the opening scenes with RJ’s attempt to rob the bear’s cave going wrong; Verne’s venture behind the hedge for the first time, encountering garden gnomes and sprinklers, being used as a hockey puck and even riding in a toy car; the sequence with the trolley of food being pursued by a dog, ending up in a rocket journey that takes off up into the sky with RJ and Verne having to parachute back to Earth on a tattered umbrella; and the climactic scenes with the animals taking over and driving an armoured truck as the bear batters its way around the outside. These, particularly the trolley/brolly sequence, have an enjoyable energy, although the silliness of the set-pieces eventually becomes tiresome. Overall though, Over the Hedge has a fun and energy that makes it a likeable, good-natured film.

The quality of the animation is expectedly excellent. Indeed, watching Over the Hedge on the big screen, one is taken aback at the almost photographic clarity of detail in the various characters and settings. Happily, Over the Hedge is one DreamWorks film – unlike Shark Tale and Shrek 2 (2004) – that resists the ample opportunity that must have been offered by all the food labels present to insert copious amounts of product placement. That said, the film still manages to offer family audiences the dubious message of being wholly in favour of the benefits of junkfood. At least in the popular cultural in-reference department, Over the Hedge‘s quotes play to a much more older audience than most animated films with in-joke references to classics such as Citizen Kane (1941) and A Streetcar Named Desire (1951).