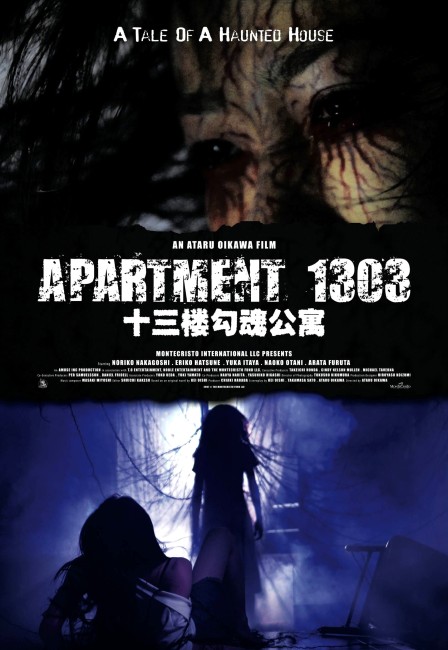 A group of friends move into Apartment 1303 at the Blue Palace Hiraoka tower block in Tokyo. In the middle of their partying, Sayaki Midorikawa starts acting strangely and then abruptly throws herself over the balcony. In the aftermath, Sayaki’s sister Mariko comes to the apartment, trying to understand why she killed herself. As she is there, Mariko starts to realise that Apartment 1303 is haunted. As she digs into its past, she finds that the ghosts are those of an abusive mother who was stabbed by her daughter. The daughter kept the mother’s corpse in the closet and then, when faced with eviction after some months, threw herself from the balcony. Subsequently, the two vengeful spirits have been making every girl who moves in jump to their deaths from the balcony.

Apartment 1303 was another of the entries in the popular Japanese ghost story fad that took off during the 2000s following the success of Ring (1998) and Ju-on: The Grudge (2003). Both of these inspired a great many sequels, spinoffs and imitators, not just in Japan but in other countries around the Asian region. Apartment 1303 is directed by Ataru Oikawa who had also made Tomie (1999), which kicked off another popular Japanese ghost story series (although one that is not as well known in the West), as well as two of the sequels Tomie: Beginning (2005) and Tomie: Revenge (2005). Oikawa has made a number of other films, including several other genre efforts with Tokyo Psycho (2004), Einstein Girl (2005), Shrill Cries of Summer (2008) and Shrill Cries: Reshuffle (2009).

Apartment 1303 feels like it is shuffling around the basics of the modern kaidan eiga – yet another woman with long black hair obscuring her face that we have seen in both the Ring and the Ju-on films, while we even get haunted phone calls at one point, conjuring association with One Missed Call (2003).

Ataru Oikawa conjures some undeniable moments of eeriness. There is the fine scene early on where the friends are partying in the apartment and Aki Fukada begins acting strangely and starts eating dog food before she puts on a motorcycle helmet, telling her friends “Well, I didn’t want to get my face all smashed up, you know,” and then abruptly jumps from the balcony. Other times you feel like Oikawa is straining to create atmosphere out of nothing – like trying to make something sinister out of a point-of-view shot of someone’s hand opening a cupboard door or of people coming up behind others.

The film sets up a promising scenario but soon trails off into the uninteresting. The spooky scenes are replaced by a routine series of scenes investigating what happened in the past whereupon the film offers up a dully schematic depiction of the abuses the dead girl underwent. Somehow it seems much more shocking when this is referred to as backstory and it only serves to make the film feel far more ordinary when Oikawa merely shows exactly what had been described earlier. The haunted atmosphere of the show eventually proves to only be a few isolated moments that are few and far between.

The film later underwent an English-language remake with Apartment 1303 3D (2012).