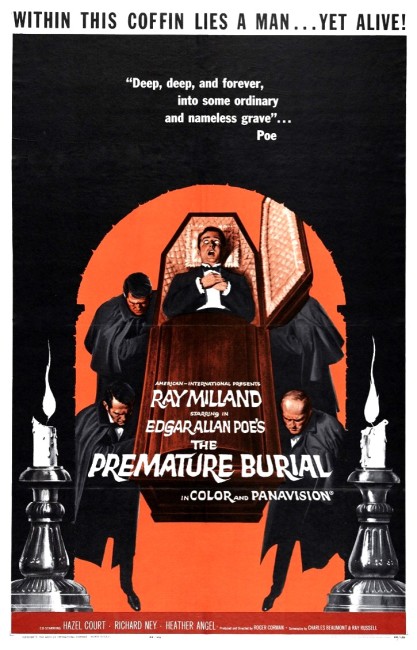 Emily Gault goes to Guy Carrell, demanding to know why he has sent her a letter cancelling their engagement. Guy explains how he has become terrified after his father’s grave was dug up to discover that his father had been buried while still alive. He has become obsessed with the fear that he might also suffer from catalepsy and be buried alive. She persuades him to overcome his fears and marry her. Soon after the marriage though, Guy’s obsessions with premature burial start to affect his sanity. To counter this, he builds an elaborate tomb to cover every possibility that might occur should he be buried alive. He then suffers an extreme fright and collapses. Appearing to all intents and purposes to have died, he is buried – but, exactly as he has feared, he is still alive.

Premature Burial was the third of Roger Corman’s Edgar Allan Poe films. (See below for the other Corman Poe titles). There is much of a muchness that the Roger Corman Poe films fade into – the same sonorous atmosphere of doom, gloom and morbid obsession with death, the creepy old mansions and brooding production design, the thundering ominous scores, the craven tormented figures usually played by Vincent Price. The production design here, for instance, is overdone – there seems so much fog in the exterior sets that you think Ray Milland might be better off starting up a natural steam bore.

The film is reasonably accurate to the essence of Edgar Allan Poe’s original 1850 short story, which is mostly an essay about historical occurrences of the title subject before segueing into a study in obsession from the unnamed narrator who is deathly afraid of being buried alive and builds a tomb that he can escape from should such happen. The film adds to the story an improbably contrived psycho-thriller plot involving a scheme to drive somebody mad a la Les Diaboliques (1955). Not much is explained about this plot – like why the culprit is concocting this scheme or about Alan Napier’s traffic in stolen cadavers. Nor does any of the tortured psychology invoked in explaining Ray Milland’s obsession with premature burial rings authentic at all.

That said, Premature Burial is nicely written in places – I especially liked the scene where Hazel Court tells Ray Milland that he is already dead, that his attempts to avoid premature burial have already symbolically buried him. Roger Corman does a fine job directing – notably a sequence modeled on the burial alive in Vampyr (1932) with Ray Milland trapped immobile in a coffin, looking up and hoping the mourners will see his open eyes. Hazel Court plays with a nicely tight-lipped firmness of character. Although, Ray Milland, replacing Vincent Price who would normally be filling this role, gives an anxious, thoroughly overwrought performance.

With Premature Burial, Roger Corman changed his formula slightly in that it is the only of the Edgar Allan Poe films not to star Vincent Price. Corman’s usual screenwriter Richard Matheson is also replaced by horror writers Charles Beaumont, the author best known for 7 Faces of Dr Lao (1964) and Ray Russell, the writer of Mr. Sardonicus (1961) and Corman’s X – The Man with X-Ray Eyes (1963).