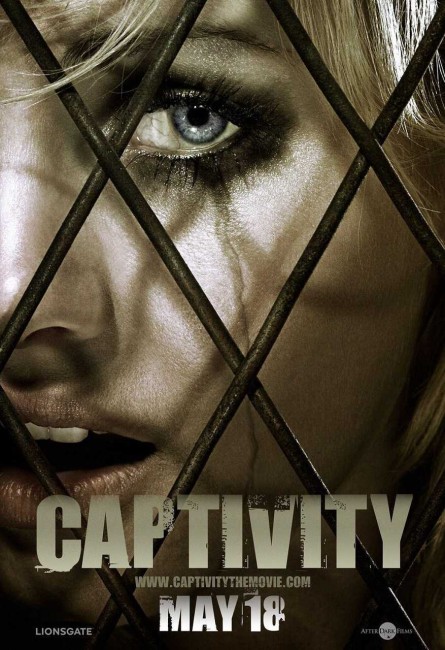 Fashion model Jennifer Tree wakes up locked in a room, having been abducted. Her unseen captor keeps her in a state of terror, switching lights off and on, sending items of clothing in through compartment drawers and drugging her when she does not put them on. Jennifer discovers that there is someone else in the neighbouring room – Gary, a drifter, who has likewise been imprisoned. The two make a friendship through the glass window that separates them and eventually become lovers. Meanwhile, police detectives are searching for Jennifer and realize they are dealing with an extremely clever criminal who has left no clues. In the cell however, everything is not as Jennifer assumes it is.

Captivity is a film that emerged amid controversy and then quickly disappeared among a host of damning reviews. The controversy started during the promotional campaign where the US distributor placed up a series of billboards featuring scenes of Elisha Cuthbert tortured and finally her dead body. These were eventually removed after a public outcry but gave the film a negative outlook with critics, where it was widely seen as belonging to the Torture Porn fad begun with Hostel (2005) – even though it is more of an imprisonment psycho-thriller than a torture and sadism film. Captivity received nominations for Worst Excuse for a Horror Film, Worst Director and Worst Actress (Elisha Cuthbert) at the 2007 Golden Raspberry Awards but lost in all categories to I Know Who Killed Me (2007), which similarly featured Lindsay Lohan being abducted and tortured.

The surprise is to see that Captivity is directed by Roland Joffe, a director better known for period and arthouse dramas. Joffe emerged from British television with The Killing Fields (1984) about Cambodia under the Khmer Rouge, which saw him nominated for an Oscar with his first film. Joffe has kept has hand in since with serious usually historical films that seem designed for the awards crowd with the likes of The Mission (1986), Fat Man and Little Boy (1989), City of Joy (1992), the publicly ridiculed The Scarlet Letter (1995), Vatel (2000) and There Be Dragons (2011). Since the public drubbing of The Scarlet Letter, which also saw him nominated for a Golden Raspberry Award, Joffe seems to have taken a turn for the trashier with Goodbye Lover (1998), Captivity and the drug drama You and I (2011). He subsequently conducted a venture into fantasy with the cross-historical drama The Lovers (2015).

I was determined to give Captivity a chance, despite its negative critical reception. I was certainly captivated by the opening scenes – the prologue sequence where a victim’s face is encased in Plaster of Paris and a tube placed up their nose to feed in a liquid that kills them while they struggle bound. This is followed by a series of scenes that contrast Elisha Cuthbert being interviewed by various E! Entertainment type shows as the unseen killer cuts up her picture to make a comic-book. There is dazzling visual play made between her constantly reflected media image, the banal words she is saying and the deliberation of the killer’s actions. There is also a striking series of images intercut through these scenes with a camera cruising through the streets looking out of a vehicle where we see Elisha Cuthbert’s image on billboards, buses, taxis and magazine stands everywhere, while ordinary everyday people and objects have been tinted an azure blue.

The depiction of her captivity come with an eerie detachment – her unseen captor turning lights off and on, drawers and locker doors popping open and then equally abruptly slamming shut, her every move being watched on closed circuit tv, black garbed figures abruptly appearing in the room with her, and then when she makes an escape into air vents, a buzzsaw cutting through the metal and a black leather gloved arm coming through to inject her.

The initial friendship with Daniel Gillies is also well developed. There is an intriguing scene where she discovers a pattern of light moving behind a tiny crack and peers through to find a room where the wall has been written with various questions and is then startled to see an eye looking back, before the other person slowly scrapes out a message “Who are you?” in the paint on the glass that separates them.

There is no doubt that Captivity has been made to exploit the success of Saw (2004), which had a very similar story of people locked in a basement by a mysterious killer who plays enigmatic games with them. During these above-mentioned scenes, Roland Joffe directs with enough visual style that one believes Captivity might defy its negative reputation and be one of the better films to emerge from the modern sadism and torture fad. Sadly however, this dissipates. Unlike Saw, Captivity‘s script comes without any puzzle, any of the torturous twists or the sense that everything is part of a fiendish psychological game.

About the time that the film pulls out its’ one big twist [PLOT SPOILERS] – where Daniel Gillies gets up from having sex with Elisha Cuthbert and opens a secret compartment in the wall, revealing that he is the brother of Pruitt Taylor Vince and part of the abduction scheme – Captivity takes a major nosedive in terms of credibility. It is a twist that Roland Joffe fails to make seem anything other than gimmicky and contrived. Everything that happens in the film from that point on only keeps sinking – Daniel Gillies’ realisation that he has feelings for Elisha and stabbing Pruitt Taylor Vince, the arrival of the cops and the completely unconvincing scenes where Gillies shoots them, and then his attempts to flee with Elisha. We even get two groan-worthy returns from the dead by various people during these scenes.

The feeling is that Roland Joffe realised he was dealing with a hack plot or had had these scenes forced on him and directed them in the most disinterested way possible. Certainly, by the point of these twists, the style that Roland Joffe demonstrated in the first half-hour has vanished altogether.

Neither of the leads do anything to stand out. Elisha Cuthbert fails to convince as a world-famous model, let alone even an adult actress. She is another of the actresses who has no-nudity clauses inserted in her contract and during her love scenes with Daniel Gillies all that one ends up being distracted by is the camera’s placement so as not to show anything. If only she had had any depth to make the part more than simply a role being inhabited by a random young actress. Daniel Gillies has the sort of face that is designed for pretty boy poster shoots – the film’s central role could just as easily have been filled with him – but equally does nothing to provide his part with any depth or complexity.